In the Locker Room with Monique Newton and Annie Goodridge 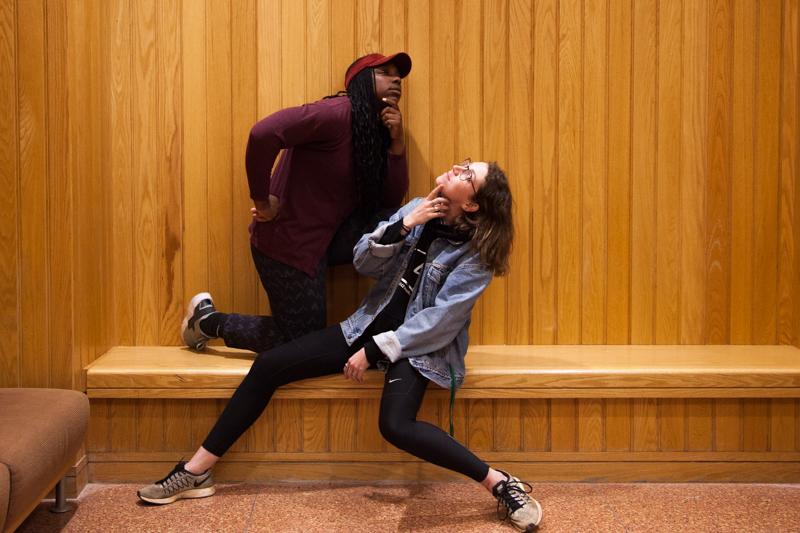 This week, the Review sat down with sophomore track and field members Monique Newton and An­nie Goodridge to discuss how it feels to be national competitors, the ups and downs of training and the be­hind-the-scenes of field events.

Annie Goodridge: It was my first time going. I made it in by one cen­timeter. It was really, really cool. I really enjoyed it, and we got to eat out a lot. I got to explore the grilled cheese market in Iowa. I had a re­ally good time with Mo and Anna. [In terms of] competing, I didn’t do what I wanted to do, which was OK, because as Mo has told me, the first time [at nationals] is very nerve-wracking in a lot of ways. There were also a lot of shenanigans lead­ing up to my event in terms of what happened in the actual day I was competing, because the officials’ [lack of organization] ended up de­laying it 30 minutes. On top of that, I have a very set schedule for how I warm up for an event, which was completely thwarted by the process. … But I had a really good time.

Monique Newton: This was my third nationals, and I’ve been think­ing back to a year ago, and last year’s indoor nationals was completely different. I wasn’t 100 percent — I was injured, so this indoor season has been a lot different. So it was nice showing up to nationals be­ing healthy, and besides the result, it was a good experience, getting there, getting to chill. We left early, so we spent a lot of time just kind of relaxing in our hotel room. Obvi­ously the result ended up being fine, so it was a great experience.

What are your favorite memories from the trip?

MN: It had to be finishing second — that was huge. And remembering back to the competition, we went to a really good steakhouse after.

AG: I was actually shocked you said finishing second over that steakhouse you brought us to.

AG: It was a great dinner. I had a grilled cheese. I think my favor­ite time was warming up for our practice on Thursday. We got to the track, and I was just really excited. It was really fun to see everyone going through the motions of what their normal pre-meet practice would be, except it was all of the best people in the country. So I would jog a lap, and it would be behind someone who was an All-American in the 800. So that was really fun. And I got to talk to some people from our conference who were there, because there were a lot of people from our conference there, and that was real­ly nice because I like making friends with people in other schools.

Track seasons can get really stressful with a bunch of impor­tant meets piling up. What do you do to de-stress or prepare for big meets?

MN: I try to just stay as relaxed as possible. Especially at nationals, the moment can get big, and people try to switch things up and do new things, which usually doesn’t end up going well. I don’t do anything spe­cial for meets, just sleep and relax. I remember Saturday just waking up, listening to music, playing on my computer, Facebook — just normal stuff.

AG: I just actively don’t go out. I do very, very little so I can get as much sleep as possible. Because Mo and I both do technical events, a lot of her practices are just throwing and a lot of my practices are just me jumping. That means I’m constantly working to jump better and do that stuff while I’m at practice. It’s an everyday thing where I’m pushing myself and competing with myself really hard. So I’d say there’s more pressure at the end of the season, but I don’t necessarily get stressed out about things that have to do with track. It’s more that the meets are longer, we travel further and I generally have more work.

MN: It’s really like you’re just doing what you’ve been doing all season.

AG: And, as Mo said, if you try doing something different, you’re going to [mess up]. It’s all about rhythm, and I’m a superstitious per­son, and I have a really set way of doing things. I work hard to pour all my energy into doing it right every time, which can help relax me in a way.

We see the runners on the track team running for practice all the time. What’s a typical practice for you guys?

MN: It depends on whether or not we have to lift. We usually lift after practice. But we do a standard warm-up with a lap, some dynamic stuff; We stretch with some bands. And then my coach has us do an ex­ercise at the beginning of each prac­tice, which varies day by day. So it can be sprints, box jumps, hurdles, or ladders or something, and then we go throw and get a bunch of reps in. Like Annie said, we focus a lot on technique.

AG: I throw javelin, so a por­tion of my practices focus on that. And then with my regular practic­es, sometimes I end up practicing twice a day, and if you add lifting in, then three times. But for a jumps practice, we get there, run two laps and then do a dynamic warm-up. Some days I’ll just stop there and do core, but other days we’ll have a sprint workout, or a short sprints workout and some bounding, or I’ll be doing runways, which is having a meet-like situation in practice.

What are some misconceptions people have about your event, or things about it you think are misunderstood?

AG: I think with long jump and triple jump, it’s all just people learn­ing the wrong technique or not re­ally understanding the technique even if someone told them. A lot of people will have bad body posi­tion and that will have effects all throughout the jump. Or I hear a lot of people say, “swing your leg” for the triple jump midway through the jump, and that’s not what you’re supposed to do at all, and [it] de­creases how far you’re jumping by multiple feet. With long jump, it’s people thinking you have to jump out, and not necessarily up, but the goal is to move up too.

MN: A common misconception about throwing is that people don’t realize how many different types of events there are. I think most people recognize shot put. People have no idea what hammer is, what weight is. Sometimes people recog­nize discus, but people usually have no idea the different types of events I do and how they’re different. And I think there’s a common conception that it’s just all strength, not tech­nique, so it really comes down to not understanding the events and how they’re different.

AG: I think there’s also a mis­conception about the shape and weight you need to be to be a good thrower, because along with shot, disc, hammer and all that stuff, you can be a completely different range of sizes, weights and heights, and you can still be just as good as any­one else. It’s the same with javelin — there’s still the same kind of vari­ety. And it’s true with jumpers, too, because there are people who are sprinters who can also jump [and vice versa]. When people say, “You look like a jumper,” or “You look like a thrower,” that doesn’t really mean anything.

What are you looking forward to most for the spring season?

MN: I guess just building on indoor and seeing what happens in outdoor. Especially because there are two brand new events for throwing in outdoor — hammer and discus — so it’ll be nice to see what happens in those [events].

AG: I didn’t have an outdoor season last year because I got a concussion, so what I’m excited for is having an outdoor season. I’ve never gone to an [outdoor] meet or anything, and we have a meet this weekend that I’m pretty excited for. I just want to see what I can do, because I’ve never been in this cli­mate outdoors. I have no idea what the schools are like, and I’ve never tested out how strong I am to the fullest, so I guess we’ll see.