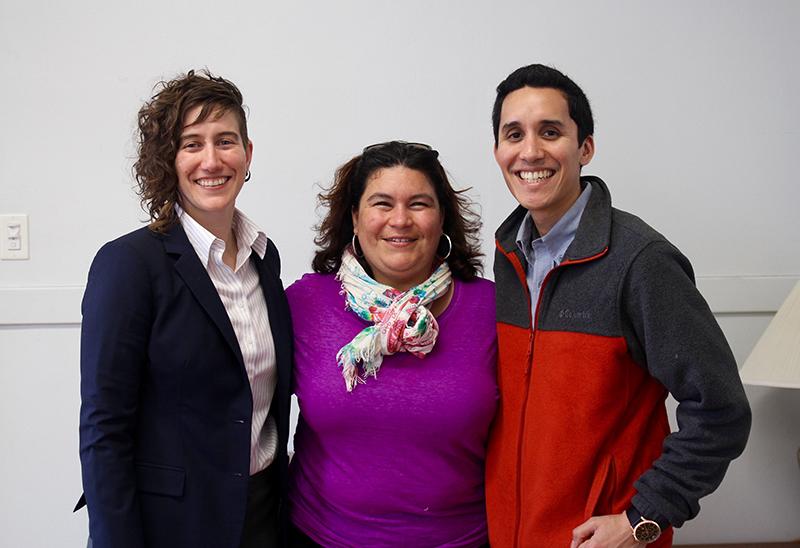 Board members of ¡Presente!: Naomi Campa, board social co- ordinator (left), Isabella Moreno, board president and Fabian Fuertes, board treasurer. The organization is the first Latinx faculty group on Oberlin’s campus.

Oberlin’s Latinx employee group ¡Presente! is holding its first official student and faculty outreach event Monday from 6 to 8 p.m. at the Cat in the Cream. The group was formed in an effort to raise awareness and support for the Latinx community on campus. ¡Presente! has been active throughout the year in connecting faculty and employees; however, this is the first event to which students will be invited.

The employee group has grown substantially from its modest start in January 2015, when it began with five Oberlin employees identifying the need for a Latinx community on campus.

“The impetus was ABC, Association of Black Concerns,” said Isabella Moreno, President of ¡Presente!. “They had a meeting in Fall of 2014, and I said ‘Well, the Latino employees need something as well’ and it was around 2015 that five of us got together.” Since the group’s inception in January 2015, it has been approved by the College as an official employee group, adopted a mission statement and elected a board of faculty members to represent the group.

“As an alum and someone active in the revival of Oberlin Latino Alumni Association, it feels like there aren’t a lot of Latino employees, but there really are,” said Moreno.

The group has a membership of more than 50 employees, according to Moreno.

Four employees are currently elected to the board: Fabian Fuertes, treasurer of the board and ensemble operations and personnel manager for the Conservatory; Naomi Campa, social coordinator of the board and visiting assistant professor in the Classics department; Isabella Moreno, OC ’94, president of the board and assistant director of disability services; and Rosalinda Linares, secretary of the board and reference and instructional librarian.

The fledgling group hopes to use the meet-andgreet Monday to introduce themselves to students and faculty.

“This is the first event we are going to host for the larger community — part of our mission statement is to create a greater community,” Campa said. “We’re inviting any self-identified students, whether they identify as Latinx or Hispanic or by nationality, to come join us. The goal is just to bring us in from all disparate parts of campus, so that students know that we are here and how to access us.”

The group hopes to gather momentum in the coming semester with a number of plans for growth, including employee development, diversification throughout the school and the creation of a website.

“We just started this year and so much of it has been word of mouth,” Fuertes said. “And now that we’re beginning to see how much we can create, with that comes the responsibility of figuring out how much of an impact we can make.”

According to their mission statement, the group’s objectives include raising awareness about Latinx social, economic, cultural and political diversity on campus and in the surrounding communities; fostering and supporting the social, intellectual and political interests on campus of the Latinx community; increasing the number of Latinx faculty, staff and students by participating in job searches; and engaging in activities aiming to draw a range of other Latinxes.