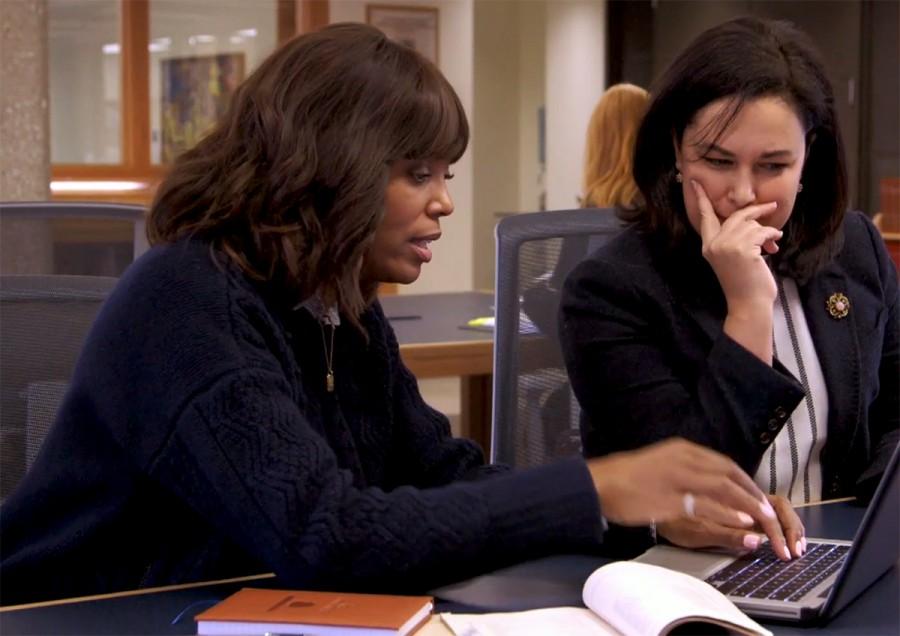 Aisha Tyler looks through the Oberlin Archives with Visiting Sociology Professor Christi Smith. TLC ‘s Who Do You Think You Are? recently filmed an episode on campus featuring Tyler.

Oberlin College will make it to primetime TV Sunday, April 3. TLC’s Who Do You Think You Are?, a documentary series exploring celebrities’ family backgrounds, will kick off its eighth season on Oberlin’s campus. The premier features actress and comedian Aisha Tyler, best known for co-hosting CBS’s The Talk and voicing Lana Kane in FX’s Archer.

The episode focuses on Hugh Hancock, Aisha Tyler’s great, great grandfather. Listed as “mulatto” in the 1860 census, Hancock was born in Texas but attended public school in Oberlin, eventually enrolling in the College.

“Aisha’s story is compelling because of the generations of educated men and women in her family,” wrote Aleta Rozanski, supervising producer of Shed Media, which produces the show, in an email to the Review.

“In the case of Oberlin, her ancestor had a particularly interesting relationship with the school that traced all the way back to his youth during the mid-19th century.”

Visiting Sociology Professor Christi Smith and College Archivist Ken Grossi delved into the College’s archives to explore Hancock’s journey from Texas to Oberlin and his time at the College.

“As much as this is a really compelling story about one particular person, it’s a window into a largely forgotten, deeply contentious period of American history,” Smith wrote in an email to the Review.

Smith and Grossi utilized many of the archive’s resources to provide insight into both Tyler’s and the College’s histories, including the College’s 1872-1873 catalog, which contains a list of students who attended Oberlin during that school year, and a book with a record of students enrolled at that time in the English course in the Oberlin College Preparatory. The preparatory program was like a private high school designed to train students for college, Christi said.

“Ken Grossi was incredibly helpful in making the archives accessible and available to us. … It was a breeze to find anything pertaining to Aisha’s ancestor,” Rozanski said. The research for each episode of Who Do You Think You Are? can take anywhere from two months to a year, and Oberlin’s expertise helped to expedite the exhaustive process. Rozanski said that TLC’s team was able to locate everything they needed in the College’s archives in just a few hours.

Outside of Oberlin’s archives, the Who Do You Think You Are? team made use of as many local professionals and facilities as they could find, including researchers, genealogists and libraries. Smith said that she is excited to watch the episode to see the rest of Tyler’s history.

“There are some definite twists and turns to the tale and I’m looking forward to seeing how it ends,” Smith said. “When Aisha Tyler left Oberlin, we really didn’t know where the historical record would take her. And having spent a lot of time in archives, it was very moving to meet someone who was personally connected to this past. It made the cases I work on that much more real to me.”

Rosanski said that the objective of Who Do You Think You Are? is to help people feel connected to their shared history and show how our ancestors faced struggles similar to those we experience today.

“Our goal is to bring a person from the past alive, not only to learn some interesting historical context but to see specifically how they approached the challenges they faced,” Rosanski said.