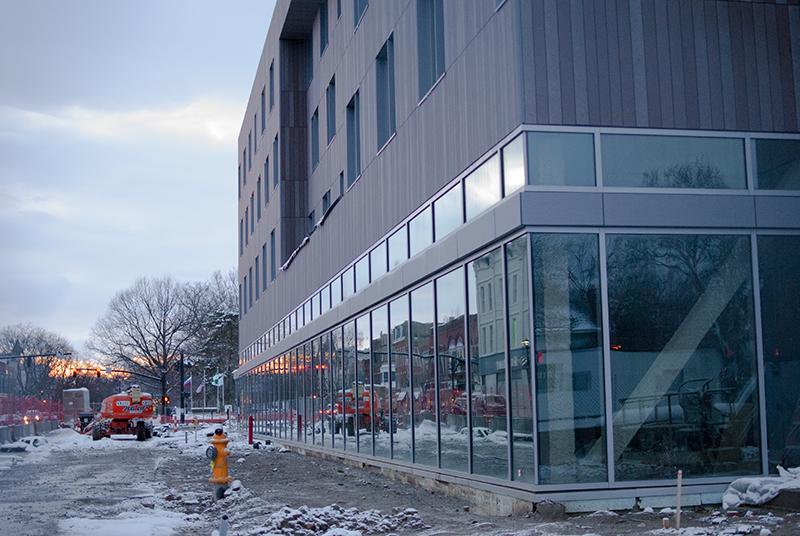 The $35 million Peter B. Louis Gateway Convention Center opening date has been postponed yet again as it continues to undergo construction. The Hotel at Oberlin, as it will be known, has been the topic of much debate between the city and the College due to several permit issues that have twice pushed back the original opening date, which was supposed to be in January. An excavation permit for concrete pouring and an occupancy permit are still needed before the hotel is allowed to open.

The College has submitted several parking plans to the city’s planning commission, but they have been rejected because of an ongoing dispute. Seventeen diagonal parking spaces on East College Street next to the Convention Center were originally proposed, but city officials claimed the spaces would block fire access and water pump connections, violating the city’s fire code.

“Public safety matters are the key issues that need to be addressed by the College and their developer in order to obtain final approval of their site plan,” Oberlin’s Interim City Manager Sal Talarico said. “We are committed to the

success of Oberlin College’s project and will continue to work with the College and their developer.”

Instead of the parking spaces, the city plans to put a 40-foot parking lane in front of the center, adding seven parallel parking spaces further down East College Street. The city is split on this issue, with local business owners saying they could use the parking along East College Street, as there are currently very few spaces. However, the city remains adamant that a fire-lane is needed.

Along with this dispute, construction delays have also resulted from having to remove hundreds of cubic yards of buried rubble left over from the destruction of the original Oberlin Inn, which was rebuilt in 1955. Delays have affected around 250 construction workers who have had to continue working on the project past its projected end date.

Once completed, the Hotel at Oberlin will be the only hotel in the United States that will rely on water rather than air for heating and cooling. The College’s admissions office and classrooms as well as a 300-person occupancy convention center will also be included in the Hotel.