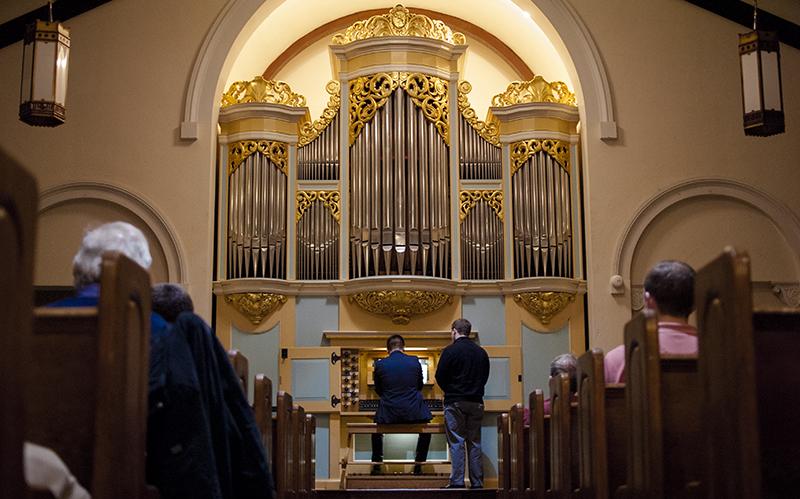 Ian Tomesch, OC ’10, plays the David and Sigrid Boe organ at Peace Community Church. The church is celebrating its 150th anniversary this year.

Peace Community Church officially kicked off the festivities for its 150th anniversary with an organ recital last week featuring Ian Tomesch, OC ’10, and will continue with more celebratory events in the coming months.

The celebrations commemorate the congregation’s establishment as the First Baptist Church of Oberlin on July 30, 1866, along with the 100th anniversary of the placement of the cornerstone for its current building on Jan. 1, 1916.

The congregation changed its name to Peace Community Church in 2000 to better reflect its commitment to being a welcoming community that works to promote peace and justice for all, explained Reverend Mary Hammond, who co-pastors the church with her husband Steve.

When the two came to Oberlin in 1979, there was a strong possibility that the church would close within a few years because of its reduced membership, Steve said. Though the congregation’s numbers are still small, Mary and Steve see the upcoming anniversary celebrations as ways to connect with the larger Oberlin community.

They are also looking to address today’s changing technological landscape by improving Peace Community Church’s social media presence. Steve said that social media could be both a hindrance and a benefit when forming a tight-knit community but that they want to determine how to use social media to enhance the life of their congregation.

According to Steve, a relatively large number of College students who joined the congregation have gone on to divinity school after graduation and become pastors, religion professors, church musicians or have pursued other church vocations.

“That’s why there remains a strong connection with students and others who have been a part of the congregation but moved to other places,” Steve wrote in an email to the Review. “We actually have the designations ‘PCC Gathered’ and ‘PCC Scattered,’ since there are so many who feel connected with the congregation, yet are scattered around the country and sometimes around the world. … With so many people in our scattered community, there is a particular opportunity for us to understand church in a new way because of the benefits of social media.”

Americans’ religious affiliations have undergone considerable changes in recent years. A Pew Research Center study conducted from 2007–2014 found that over this seven-year period the Christian portion of the U.S. adult population declined, especially among young adults, while the number of adults who do not identify with any organized religion grew.

“It used to be that being involved in a faith community was almost like the societal default,” Steve said.

As the U.S.’s religious demographics have changed, so have societal attitudes toward institutional religions. The rise of the Moral Majority and other conservative religio-political groups in the ’70s and ’80s contributed to this shift in the public’s perception of Christianity, Steve said. “It has been growing more and more difficult to help people understand that not all Protestant and Catholic churches are as conservative as the culture believes they are,” Steve said.

Peace Community Church’s congregation works to accommodate the changing lifestyles of Oberlin residents and to reflect the progressive social values upheld by many community members.

“We are committed to a church membership that makes no distinctions based on age, sex, race, sexual orientation, cultural background or economic accomplishments,” Mary wrote, quoting the church’s constitution.

Though fewer College students today seem to come from religious backgrounds, Peace Community Church has made steps to connect more with the student community, Steve said. For instance, student lessons and recitals are held at the church using the David and Sigrid Boe organ, which was installed in 2011 and is owned by the Conservatory.

“I am pleasantly surprised at the relatively rapid change that is taking place in more progressive churches on LGBTQ inclusion,” Steve said. “Even 10 years ago, those of us who were working for that change never imagined that, even though there is still a long way to go, we would have made this much progress.”

The church will be holding a variety of educational activities on Sunday mornings to highlight the congregation’s history and discuss the future of the church. Peace Community Church will be celebrating its dual anniversaries with a handful of summer picnics, including one on July 30, the day in 1866 when the congregation was founded, and an ice-cream social on the church’s front lawn in September. The weekend of October 15 will round out the year’s anniversary celebrations with a host of church activities.