In The Locker Room With Sarah Mills and Ben Gillen 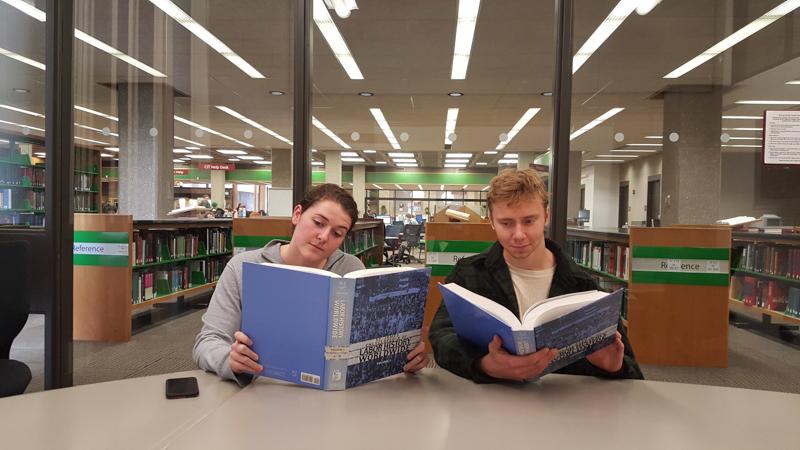 This week, the Review sat down with sophomore club soccer liaison Ben Gillen and senior club soccer co-captain Sarah Mills to discuss their experiences playing club at Oberlin, how the team dynamic has changed over the years and anything they would do differently to improve club soccer.

How would you describe your roles on the team?

Ben Gillen: I talk to Betsy Bruce, the director of Recreation and Club Sports, a lot, so I’m like the contact between her and other teams. It’s really cool; I have meetings every Wednesday and lunch in Betsy’s office where she brings us up to speed on what’s going on and when we should schedule games.

Sarah Mills: Basically I schedule and run the practices with my co-captain. Merlin [Hoffman] and I have been co-captains since our sophomore year, so this has been our third year running the soccer part of the team, and it’s been really fun. The biggest thing I notice is that it’s a coed team, but I might be the first female captain of this team. Before there were only senior guys running it, over time I’ve noticed a huge shift in the numbers of girls joining the team. This year it’s half and half, which it’s never been before.

What would you attribute this shift in more women on the team to?

SM: I think having a female leader makes girls a lot more comfortable playing. It’s really intimidating if you’re a freshman girl and the team is a bunch of guys that have been playing forever. A lot of my past teammates have told me they’ve felt that way at one point or another.

Would you say your four years playing club soccer has been a rewarding experience?

SM: Yeah definitely. It’s a perfect level of play that makes it really fun — the point of playing sports for a lot of people is to have fun, but sometimes you kind of get pulled into the politics of it. I played so much soccer in high school that when I got here I almost felt like I never wanted to touch a ball again. But then this intermediate level where I didn’t have a coach but I still had competition was a perfect combination. I don’t want to play intramural people, wearing jeans and sneakers, but I don’t want to do varsity and travel and have all the responsibility that comes with that.

Would you say that most people playing club soccer have a lot of past soccer experience?

SM: Yeah, but it’s a huge range. I feel like before Merlin and I, the atmosphere was a lot more serious. Now we try and emphasize that this is for fun and there is minimal responsibility required, because we don’t play that many games. But this can definitely lead to problems with commitment when spring season comes around and only six people show up to practice.

Considering that the numbers can vary so much, do you guys recruit in the offseason?

SM: Yeah, at the beginning of the year we make a huge deal about recruiting. We play in north quad and try and get people to come join us and spread the word to their friends. So at the start of fall semester, we have like 60 people and then slowly — due to the lack of responsibility and commitment — people will start to dwindle, but that means that you recognize the people that really want to be there. Over the winter we have really crappy field house times that few people can attend, so it’s really rough to keep people engaged. We try to have parties and team dinners, but it’s very common for people to get interested in other things at school and no longer have time to play.

What is a memorable moment that comes to mind when you think of your time playing club?

SM: Declan falling yesterday. [Laughs.] We have this one kid, and yesterday we were playing a scrimmage, and he was playing defense for a while. He’s a real goofy kid, and he’s always having a good time. He yells out, “I’m going to go all the way!”

BG: Yeah, at this point he’s really hyped up, yelling and waving his arms around as he runs after the ball. [Laughs.]

SM: So he kicks the ball out too far ahead of him, and this girl on the other team runs out and kicks it right into his face. He falls forward, sprawled out on the ground. The entire team stopped, and we all laughed for literally like 15 minutes.

So what would be one thing that you would change? For example, maybe something about the team or maybe even the structure of the club system as a whole?

BG: I would say that I would definitely like to see some more consistency. I’ve seen the club soccer team in some really good times, and I’ve also seen times when nothing is happening and you don’t have enough people to practice and play. But throughout the year, it will drop off as people get busy or lose interest. Maybe there should be a way to recruit more during the offseason so that you can get more people to join your team.

SM: Yeah, you get a lot more people to join in the fall because a lot of newcomers are first-years.

BG: Definitely. Also people’s schedules change second semester, so there are many people that were planning on playing for the whole year but can’t due to scheduling conflicts.

SM: From now on there should be coed leadership as a requirement, since this is a coed team.

BG: Yeah, I’ve seen times when there are 20 people at practice and no women. If you’ve got an uneven ratio it’s not the same atmosphere as a genuine coed team.

SM: It’s usually mostly the girls that leave. My freshman year, I was playing with seven girls for like two weeks, and then all but one quit because they thought that they weren’t good enough. That’s a shame. This is a club sport — you shouldn’t have to feel that way, because you’re supposed to be having a good time.