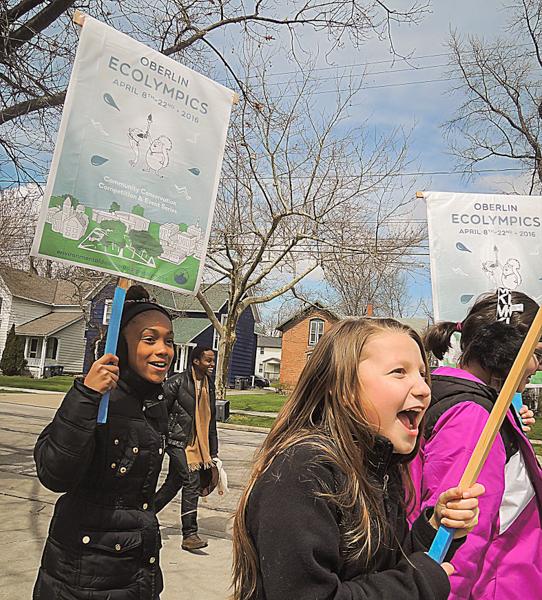 Students march through Oberlin in a parade marking the opening of the Ecolympics. This is the district’s third year participating in the competition.

A competition in which green beats gold is a staple of the city’s school year for both the College and the city’s public school system.

The third annual Ecolympics, which began April 8 and will conclude on Earth Day, is off to an active start. During the Ecolympics, students participate in marches and events centered on environmental sustainability and the decrease of water and electricity usage.

The College created Ecolympics in 2004 as a competition between dorms and co-ops to reduce energy and water consumption. Oberlin City Schools joined the games in 2014, when the

public school system collaborated with the Environmental Dashboard project to install its technology to monitor the schools’ electricity and water intake.

Petersen has helped organize the College’s Ecolympics since 2004.

The competition itself aims to reduce electricity and water usage from statistics recorded for the building in previous months. In last year’s competition, the school district implemented sustainable practices that kept 27,660 pounds of carbon dioxide from entering the atmosphere.

The competition has also prompted the participants to review their current systems and practices. During last year’s Ecolympics, students at Eastwood Elementary School discovered a water leak that would have resulted in the loss of about $20,000 and more than a million gallons of water by the end of the year.

“We were impressed by the impact of the students’ discovery. Their story reminded us that competition is powerful and especially useful when paired with the Dashboard technology,” said College sophomore Anna Moore, who worked on the team that calculated the cost of the potential loss.

Prospect Elementary has won both of the competitions since Ecolympics became town-wide, reducing its electricity usage by an average of more than 30 percent.

The Environmental Dashboard team has also been working with teachers in Oberlin’s public schools to develop curricula that promote conservation and emphasize the importance of environmental science.

The installation of the Dashboard technology in the public schools has been entirely funded by grants. The College received a grant from the Great Lakes College Association Protection Fund to develop the Environmental Dashboard as technology that could be offered to other schools and communities, and grants from the Ohio Environmental Education Fund and the State Farm Youth Advisory Board paid for the technology to be installed in Oberlin’s public schools.

“The Dashboard is a wonderful teaching tool,” said Joy Harrison, a fourth grade teacher at Prospect Elementary. “It supports our fifth grade units on the environment and electricity beautifully. The Dashboard helps us think locally as we investigate such global concerns as energy, conservation, water quality and the health of ecosystems.”

Other teachers have also used the Environmental Dashboard in lesson plans. Jennifer Smillie, a teacher at Oberlin City Schools, has used it to teach her students to analyze data. She developed an exercise for her mathematics course that required students to “mine” the Dashboard for stories that used patterns within Oberlin to look for ways to improve the city’s consumption for energy and water.

“I was overwhelmed with some of the insights the students were able to make concerning consumption patterns on Oberlin’s campus. They demonstrated excellent skills in quantitative analysis,” said Smillie.

Along with education development, prizes are also a part of the public schools’ involvement in Ecolympics. They include performances by OSteel and OC Taiko as well as ice cream socials.

“We see the involvement of Oberlin’s public schools as the perfect opportunity to strengthen town and gown relations,” wrote Augustus Arthur, project manager of the Environmental Dashboard, in an email to the Review. “[It] also prepare[s] the next generation for a future of sustainable living choices.”