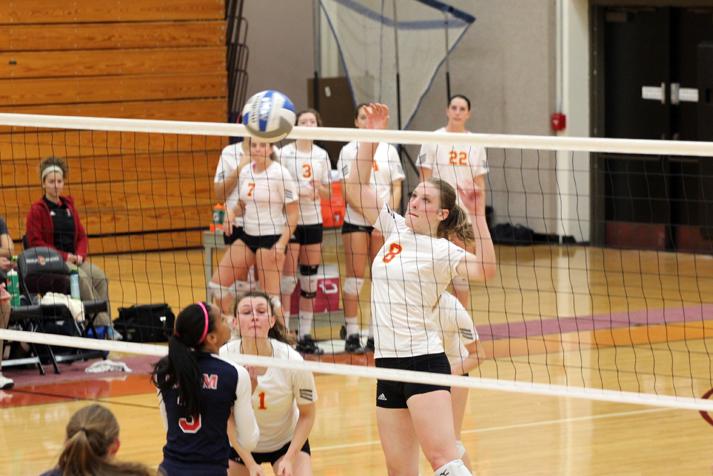 Christine Antonson spikes the ball against the Adrian College Bulldogs. The Yeowomen’s record is now 10-17 on the season.

The Yeowomen volleyball team has been getting mixed results lately. Most recently, the Yeowomen came up short to the Adrian College Bulldogs, falling 0–3. During that same week, however, the team managed to beat some major competitors, such as The College of Wooster and Kenyon College.

Against the Bulldogs, the Yeowomen lost 26–24, 25–19 and 25–19. Still, that defeat did feature some skilled Yeowomen play. First-year Hannah Tyburski kept up her aggressive offense with 13 kills, while junior Christine Antonsen chipped in with six. Sophomore Molly Powers registered 11 digs in the loss, and first-year Meredith Leung added nine digs and 30 assists.

“What [that loss] really was is that it was a long fall break, it was the fourth game of the week, and we were starting to fatigue. We lost our competitive drive in that moment, especially in the third set,” said sophomore Shavonne Stanek. “Overall, I’m proud of the season we’ve had so far, especially what our freshman have brought to the table.”

Powers pointed out how Tyburski was just named North Coast Athletic Conference player of the week. “Hannah, as well as the rest of the freshmen, does a really good job giving us the competitive edge that we need. [The first-years] add so much to the team, on and off of the court.”

The team managed to have a good week in competition despite that recent loss. With a victory against the Kenyon College Ladies, the Yeowomen snapped a four-game skid while improving their NCAC record to 4–3. Overall the Yeowomen are now 10–16, just one win shy of last year’s total.

At Kenyon, the Yeowomen won despite adverse circumstances. “This big win happened on their home turf during their senior night, and we still beat them. It’s up in the air who wins when it comes to Kenyon, and it depends on how we’re playing,” said Stanek. “We weren’t completely sure if we were going to win, but ended up coming out on top,” she added.

The home game against The College of Wooster Fighting Scots was also a landmark victory for the team. “We now have won games against more than half our conference teams, which is really important,” said sophomore Maddy Dunn. “Wooster was really important — we hadn’t beat them in eight years. We’re such a young team, our potential is finally starting to show. Hopefully next year, we can start beating some of the top-runners in our conference while we continue to build.”

The Yeowomen made some impressive moves against the Fighting Scots, as Tyburski continued to impress, racking up 15 kills in the win. Antonsen added 10 kills, while Dunn completed a trio of Yeowomen in double digits with 11. Dunn was the most efficient of the trio, hitting one-third of her shots for kills.

Stanek noted the team’s competitive nature has helped it improve this year. “Last year, the team started to build again. We just began to have that competitive drive again and not be so passive about losing. That’s probably how we are growing the most — it’s not okay if we lose. We want to win, and we sure as hell will fight to do so.”

The Yeowomen will take that attitude into their next home match against the Olivet College Comets at 2 p.m. on Saturday, Nov. 2.