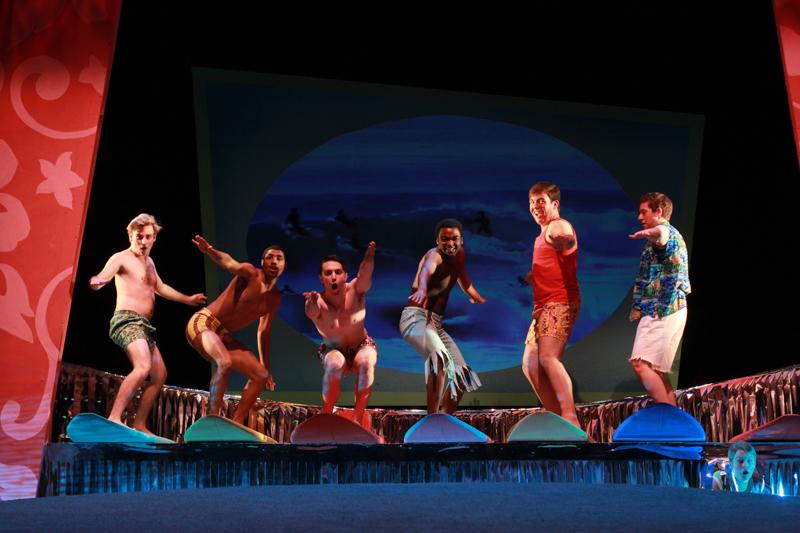 For anyone acquainted with the cinema of the early 1960s — with its psycho thrillers, horror films and beach party movies — Psycho Beach Party will feel familiar. And it will also feel a little ridiculous. This makes sense, given that Pscyho Beach Party is a send-up of all those genres.

The play, which will be performed in Hall Auditorium tomorrow and Sunday, is an examination of the U.S. post-WWII and pre-Vietnam. During this time, when teenagers increasingly participated in consumerism, the country saw an explosion of these movie genres in popular culture. Mainstream cinema came to include both the beach party genre and the psychological thriller.

Beach party movies often featured good-looking — and invariably white — teenagers running around, dancing on the beach and jumping into romantic adventures. The cinematography was rife with heteronormative imagery. At the same time, the popularity of psychological thrillers and horror films increased, often appropriating those same elements and soaking them in blood.

Village, the play is a camp comedy. “[It’s a satire] in which what we would generally consider to [be] the normative symbols are turned on their heads. It’s a very queer look at this heteronormative beach party movie,” said Director and Associate Professor of Theater Matthew Wright.

Wright sees this month as an ideal moment for Psycho Beach Party to be staged. With QueerFest and Drag Ball occurring on campus in April, the Theater department thought the play was the perfect way to celebrate the queer community at Oberlin.

The play represents an opportunity to survey the gay movement over 50 years.

Movies written in the 1950s and ’60s were certainly heteronormative in content, but many of them were written by gay men. “[They took to the genre with this] very sort-of queer eye … for both male and female characters,” Wright said, “and Busch exploits all of that in this play.”

Psycho Beach Party was written in 1987 during the height of the AIDS crisis, when many in the gay community were feeling disheartened. Charles Busch was writing for a community in a great deal of pain. He wrote this humorous play so the gay community could have something to laugh at in a time of distress.

Wright wants the audience of Psycho Beach Party to not only understand the history of the gay rights movement, but also to celebrate LGBTQ identities through humorous commentary. “One of my interests in doing it is to keep the history alive,” he says. “I think it’s really important to have reminders that this play was written in a time when gay men were really, really struggling. I think it’s really important in 2016 to look back at the kind of creative work and creative spirit that came out of that time, and to understand that in this time of darkness, there was a real desire to laugh.”

Those attending the play can expect just that — to laugh. Psycho Beach Party has been described as laugh-a-second theater. But attendees can also expect great music from the early ’60s and dancing on the beach. “It’s essentially a two hour party,” Wright said. “Given the struggles we’ve had on campus over the last couple of years, I just wanted to have a theatrical party.”