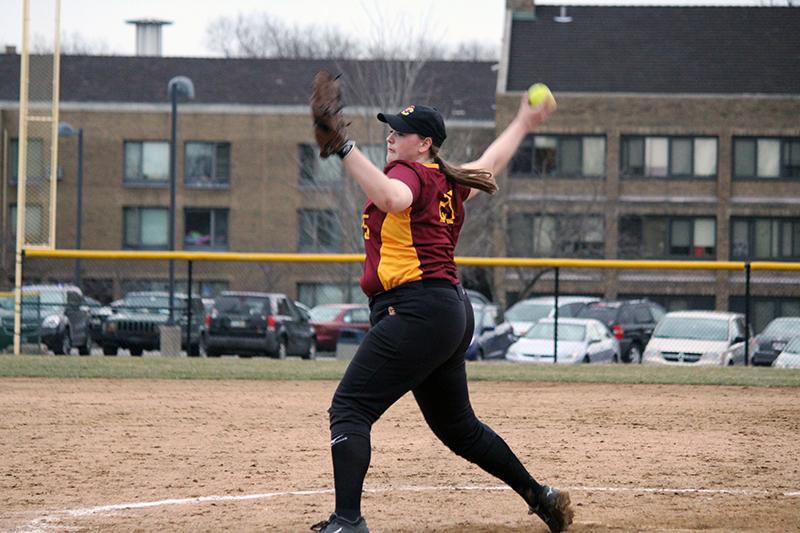 First-year pitcher Hannah Rasmussen delivers a pitch to her Ursuline College opponent March 9 in Pepper Pike, Ohio. The Yeowomen split their doubleheader Wednesday with the Allegheny College Gators, earning their first conference win of the season.

The softball team stepped up to the plate Wednesday to take on conference foe the Allegheny College Gators. Coming off of a tough weekend against the DePauw University Tigers, currently ranked number one in the North Coast Athletic Conference, the Yeowomen looked to bounce back and get their first conference win of the year.

In the first game of the doubleheader, first-year pitcher Hannah Rasmussen threw a complete game, giving up no runs in a 3–0 win and helping the Yeowomen earn their first conference win of the season. Junior catcher Grace Evans, junior center fielder Ariana Enzerink and first-year pitcher Kat Ladouceur all earned an RBI in the victory, each of them bringing runs home in the bottom of the fourth inning.

The Gators would not be shutout twice in one day, however. In the first inning of game two Allegheny was able to score four runs, followed by one run in the second inning and a run in the third. After three innings of play, Allegheny led Oberlin 6–0. Surrendering another three runs in the fifth inning, Oberlin made a comeback bid in the bottom of the seventh, scoring four runs courtesy of RBIs from junior outfielder Tori Poplaski, sophomore third baseman Dana Rae Goldstein and Evans. However, the Yeowomen’s late-game heroism would ultimately fall short in a 9–4 defeat.

Considering their split with Allegheny, sophomore outfielder Maria Roussos said that taking each game play-by-play and inning-by-inning would be the key to success for the Yeowomen during the remainder of their season. “For the rest of the season, we are focusing on staying tough through all seven innings and taking each inning as its own game. If we win each inning, we will win the game.”

On Sunday, the Yeowomen took on the nationally ranked DePauw University Tigers. The Tigers drew first blood in game one when they scored in the top of the third inning to take an early 1–0 lead. But the Yeowomen had an answer, scoring four runs in the bottom of the third with RBIs from Evans and Ladouceur. DePauw came right back in the fourth, scoring three more runs to tie the game back at 4 a piece, before demonstrating its status as a nationally ranked competitor and breaking the game open. The Yeowomen did their best to keep pace, but were eventually defeated 14–4.

The second game on Sunday turned out to be an offensive struggle for the Yeowomen, as Oberlin was held scoreless to the final score of 9–0. Reflecting on the weekend, Head Coach Sarah Schoenhoft said that the strides the first-year pitchers have made this season have been apparent.

“I think that our freshmen pitchers are doing a really great job. It is tough to take the mound,” Schoenhoft said. “As freshmen, they have just gotten better and better. We have really increased our strikeouts throughout the season. Early on, we were getting two strikeouts a game, and now we’re getting four.”

Poplaski also said that while the Yeowomen’s record certainly doesn’t accurately depict their talent, the squad still has a few surprises in store for the rest of the season.

“I really think that we need to focus on winning every inning and keeping the momentum on our side,” Poplaski said. “If we give a perfect effort on every play, then we might surprise ourselves. We are a really talented team this year, even though our record doesn’t show that. I still believe that we can flip the switch at any moment and really come out strong.”

Splitting with the Gators puts the Yeowomen at 2–29 on the season and 1–11 in the NCAC. The softball team aims to capitalize on the momentum they have from its win against Allegheny when it hosts the Wilmington College Quakers Sunday at 1 and 3 p.m.