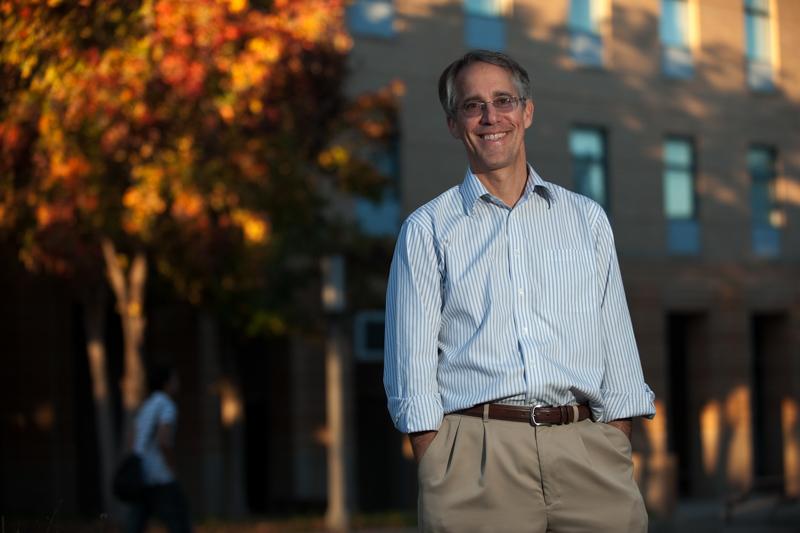 Jeffrey Wasserstrom is Chancellor’s Professor of History at UC Irvine who specializes in modern Chinese history. He visited Oberlin to give a talk on the Boxer Crisis of 1900.

Jeffrey Wasserstrom is Chancellor’s Professor of History at UC Irvine. He has authored four books, including China in the 21st Century: What Everyone Needs to Know, and frequently contributes to newspapers and magazines. He is currently finishing a book on the Boxer Uprising of 1900. This week, Wasserstrom came to campus to research Oberlin’s Memorial Arch on Tappan Square, and yesterday gave the lecture “China and the Ghosts of 1900 — The Brutal Boxer Rising and the Civilized World’s Savage Revenge.”

What conditions led to the Boxer Uprising?

The overall context for the Boxer uprising was that, over the course of about 60 years before then, the Qing Dynasty kept losing wars to foreign powers — first to the British, then to the British and the French, and then, most unsettling for China, to the Japanese. Those played out from 1839 to 1895, and within the Chinese elite there was the response, “So how do we deal with this?”

There was a swing back and forth among the elite about how far [to] go in learning from the West, but basically all of the elite were thinking that some form of borrowing was necessary. After losing a war to Japan, a lot of people were thinking, “Well, Japan seems to have been successful at adapting a lot of things from the West, so maybe we need to go that way.”

The Boxers were a last-gasp of a different kind of response to it, which was just to reject completely what was coming from the outside and actually to blame the coming of the West and the fact that there were inroads by missionaries and others for all that was going wrong in China at the time.

The Qing Dynasty initially thought [the Boxers] looked like bandits, so they were going to suppress them, but there were always some people saying, “Well wait a minute, all the conventional efforts we’ve used to stand up to the foreigners haven’t been working — what about making use of these militants?” Eventually, the Qing Dynasty did back the Boxers, so that’s one reason why I try not to use the term “Boxer Rebellion,” because “rebellion” suggests they would have been trying to overthrow the dynasty, when in fact they expressed loyalty to the dynasty.

Who were the Boxers?

The Boxers were a variety of groups that had mixtures of folk beliefs and popular religious beliefs. The reason they were called “Boxers” by the Westerners was because they used martial arts techniques in their fighting, and they also used displays of martial arts techniques by village temples to try to gain recruits. … It was largely young men and boys who joined these Boxer bands, and initially they attacked missionaries [and] destroyed churches — most of the people they killed were Chinese Christians. Then they moved on Tianjin, a northern port city, and Beijing, the capital. They laid sieges to those two cities, trapping foreigners inside in each case, and at that point they were backed by the Qing Dynasty, so it was actually Qing troops and the Boxers that laid those sieges. A Japanese official and a German official were killed, which triggered a great deal of anger on the part of the foreigners. The endangerment of diplomats and their families, particularly in Beijing, angered [foreign governments]. There was a relief force, an army, made up of soldiers marching behind eight different foreign flags — countries that usually were competing with each other, but decided to collaborate. It was kind of the first of what we would now call an international peacekeeping force and, once they lifted the sieges and defeated the Boxers, they also became the first international peacekeeping force to go to another part of the world and start behaving atrociously. That led some people to wonder whether it was as clear a divide between the civilized and the savages as [foreigners] had been saying at first.

Is that why this was considered one of the first global wars? Hadn’t Europeans also exerted influence over China before?

The way that Chinese intellectuals at the time and the Qing government sometimes though of it was that different foreign powers were nibbling away at different parts of China. … What was new in this case was that the United States was part of that team of imperialists, if you will, [along with] Japan. … You really have a very broad spectrum of powers represented, and [the armies involved] were even more international than that, because the British troops were actually largely Indian troops and the French troops included people from colonized parts of Southeast Asia.

How was Oberlin tied to all of this?

Oberlin had a long relationship with missions in Shaanxi province, which was one of the parts of northern China where there was a massacre by Boxers. People with ties to Oberlin were killed by the Boxers, the arch commemorates that loss of life, and it’s unusual; there aren’t other memorials of that sort to the Boxer victims.

How has the Boxer Uprising been represented historically in China and elsewhere?

I think in different parts of the West, the representation is similar to certain things you can see about the arch. There’s been a tendency to focus on the loss of Western lives particularly — sometimes they branch out and think about it as a time when there were also Chinese Christians who died — but in fact the largest number of people who died during the Boxer crisis as a whole were killed by the invading force afterward. In the West, the way the story tends to be told, you have the Boxers rise up, there’s the siege, particularly of Beijing, the international force marches in and saves the foreigners there and then the credits roll.

The Chinese story brings in imperialism before the rising, so tells more about the causes of the rising, and then it deals with the rising and the siege, but it also deals with the more-than-year-long mopping up exercises after that, in which a lot of people who had nothing to do with the Boxers were killed in campaigns of retribution. And then there was a very large indemnity imposed on the Qing, which gets a lot of attention in China. The indemnity was [that] the Qing dynasty had to pay foreign governments for the loss of foreign lives and property, but there was no discussion of indemnities for the loss of Chinese lives.

You have to think about what part of the event is remembered and what’s glossed over. … While the Western story emphasized the atrocities of the Boxers and now often overlooks the atrocities by the invaders, at the time there was actually a lot of reporting about bad things being done by foreign soldiers in China. … There were certainly critics of American imperialism in America then, the most famous being Mark Twain, who said [that] if he were Chinese, he would have been a Boxer and that the missionaries and the foreign armies had a lot to answer for.

For your book on the Boxer Uprising, is there any particular angle you’re taking on the events?

What I want to do in the book is try to pay equal attention to the rising and the invasion and occupation. So to do that, while I won’t tell the story exactly as it’s told in China, I want to tell it from that two-sided perspective. I also want to tell it as a global event, … even though there was a Western story and a Chinese story, actually different parts of the West saw it in different ways. … The book’s kind of about history as déjà vu. In America, there was an effort to say that it was like what the settlers faced telling it as a frontier story. In Britain, they often thought of it as being parallel to what the attacks by people in India during the Sepoy Mutiny of 1857 were like. There was this kind of reaching to the past to try to make sense of something in the present. And that never goes away, that pattern. When 9/11 happened, there was a lot of discussion that it was like Pearl Harbor. The analogies are strained, but it’s part of the process. I’m interested in how people process it, and that’s another side of a global 18:19 event, it’s not just that people from different parts of the world were involved, but that different audiences brought different things from their own experiences into it. Intellectuals in India were quite divided about the Boxer Uprising because they thought that [it] was moves by ignorant peasants who had superstitious beliefs — one part of them saw it that way — but another part of them thought, “Yeah, but they’re standing up to imperialism in a way that we weren’t able to.” So I want to get as many different kinds of perspectives into the mix as I can, and that’s one reason why the arch is such a compelling thing to think about, because it means different things at different periods of time. … I think any time you write about the past it’s inflected by some of the things you’re thinking about in the present.