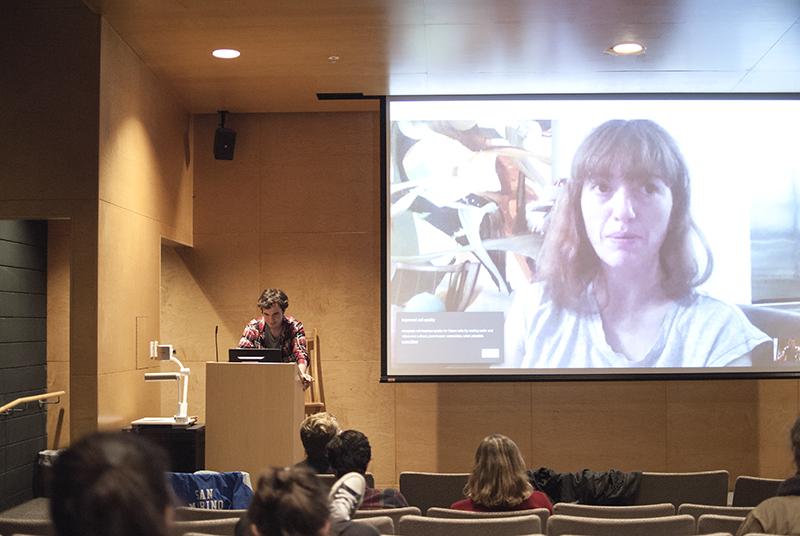 "The Diary of a Teenage Girl" director Marielle Heller fields students' questions in Hallock Auditorium Tuesday after a screening of the film. The event, organized by College first-year Dylan Purvis and College sophomore Joey Shapiro, wrapped up the Independent Film Series for the semester.

Students at the Adam Joseph Lewis Center for Environmental Studies’ Hallock Auditorium had the chance to meet Marielle Heller, director of The Diary of a Teenage Girl Tuesday. Released in 2015, Diary was beloved by critics and fans alike; a New York Times Critic’s Pick, the publication called it “gutsy” and “exhilarating.” A screening of the film itself preceded the video question and answer, both organized by the Oberlin Independent Film Series.

Diary is an intimate portrait of a 15-year-old girl’s struggle through adolescence. In the throes of puberty, Minnie’s (Bel Powley) first year of high school is interrupted by a turbulent affair with her mother’s boyfriend (Alexander Skarsgård), sending her down a path of insecurity, heartbreak and self-realization. Based on a graphic novel of the same name, the film channels the raw, trippy emotional landscape of the source material to spectacular effect.

Heller spoke about the closeness of her relationship with the novel. “Reading the book was such a profoundly personal experience. … It felt so intimate; it felt like it was right here,” she said. “And so I wanted the movie to feel like that too — to feel like we see every single part of [Minnie].”

This attention to Powley’s character shines through in every frame of the film. Her internal monologue narrates most dialogue-free moments, allowing viewers constant insight into the inner workings of her mind as it stretches through growing pains. Every line lands with an emotional wallop. Early on, the protagonist pleads to a mirror, “I need a body pressed up next to me so I know that I’m really here.” Her quest throughout the story focuses on her self-proclaimed search for affection, all the while testing her own limits. It’s this awareness of her youth that places her in stark contrast with her older lover Monroe, creating an uncomfortable dynamic that’s exacerbated by the movie’s unflinching portrayal of sexuality. After the two have sex for the first time, she tells herself, “It’s probably all right, because he’s a good guy and knows how it goes, and I don’t.” As the story unfolds, however, it becomes clear that he’s just as broken as she is; the difference is, his injuries don’t have time to heal. The juxtaposition between her ever-changing psyche and his stunted, maddeningly manipulative attraction to her is performed admirably by both parties, making the relationship achingly real.

The director’s experiences with theater allowed her to deeply engage the actors with the material. “It was the most intimate relationship, and we rehearsed for two weeks before we started filming, which you never get to do,” she said in reference to her experience with Powley. “We were so close, and I think everyone who was involved in this knew how passionate I was and what the story meant to me and how long I’d been working on it. … I think everyone enjoyed being in a situation where there was time and space to put in all of that work.”

That work certainly goes a long way toward explaining the on-screen chemistry between the three main actors. Kristen Wiig plays Minnie’s mother with a tough but sympathetic candor, speaking with a jaded, judgmental perspective. One scene shows her pondering at the kitchen table with her daughter at her side. After blowing a curling puff of smoke, she says of Minnie’s absent best friend, “That Kimmie’s kind of white trash, isn’t she?” She then quickly retracts with an, “I mean, in a good way.” Minnie’s gleeful incredulity at her mother and fascination with Monroe, her mother’s wariness of their relationship and near-silent affection for her daughter, Monroe’s creepily vulnerable attraction to Minnie and vacuity in the presence of his girlfriend all lend the trio a beautifully circular magnetism.

Able to turn on a dime from biting humor to dark realism, Heller’s writing drives the emotional storyline forward. Unsurprisingly, she displays a deep understanding of both adolescence and maturity in her unpretentious presentation of the narrative.

Though The Diary of a Teenage Girl focuses specifically on experiences of a girl transitioning into womanhood, the many shades of truth in every scene are bound to resonate with any audience member, an intentional result of Heller’s design. “I wanted people who were not teenage girls to feel what it felt like. … I wanted people to be in her mind and be … getting a little window into what that experience is. I wanted the audience to go on a ride with her.”

‘Going on a ride’ with unique movies one might not fully understand or relate to is an underlying principle of Shapiro and Purvis’ Independent Film Series. A decades-long tradition at Oberlin, Purvis revived the organization at the beginning of last fall, but it wasn’t until Winter Term that Shapiro joined and the two began planning for a bigger and better IFS.

“We watched movies and decided what we wanted to show… and after [David] Bowie’s passing, there were a lot of musicians on campus who admired him, so we decided to host a concert/film combo tribute to him.” That tribute concert — paired with the surreal The Man Who Fell to Earth starring the pop-culture icon himself — was their first event. “It was both a success and a failure. … There were a lot of people for the concert, but not many people actually stayed [for the movie],” Shapiro said.

In the ensuing months, the two also hosted showings of David Lynch’s famously unsettling Eraserhead and the equally uncomfortable but similarly masterful Under the Skin, the latter at the Apollo Theatre.

“The crowd was sort of divided; I don’t think they expected such a weird film,” said Purvis of Under the Skin. Shapiro agreed, elaborating, “Having any reaction to it is a success. I mean, having any reaction that strong to a movie — even if it’s hatred — it has to be something special.”

To the coordinators of the IFS, independent films aren’t there just to be enjoyed. “For a movie to be great, it just has to make you think and feel something deeply,” Purvis said.

In that respect, there’s a lot that is unique to Oberlin about the organization — Shapiro noted the importance of tapping into a diverse array of directors and voices on such a politically charged campus.

Purvis agreed. “The audience is more aware and more critical, so we should be conscious of that. But that’s not why we show diverse films, it’s because we want to,” he said. “Oberlin has a lot of people that are interested in film, it just doesn’t seem like a … well-organized group of people.” The College, he said, doesn’t have nearly as vibrant of a film scene as it could. “The goal of [IFS] is finding people who are interested in movies and making them aware that this is a thing that’s going on.”