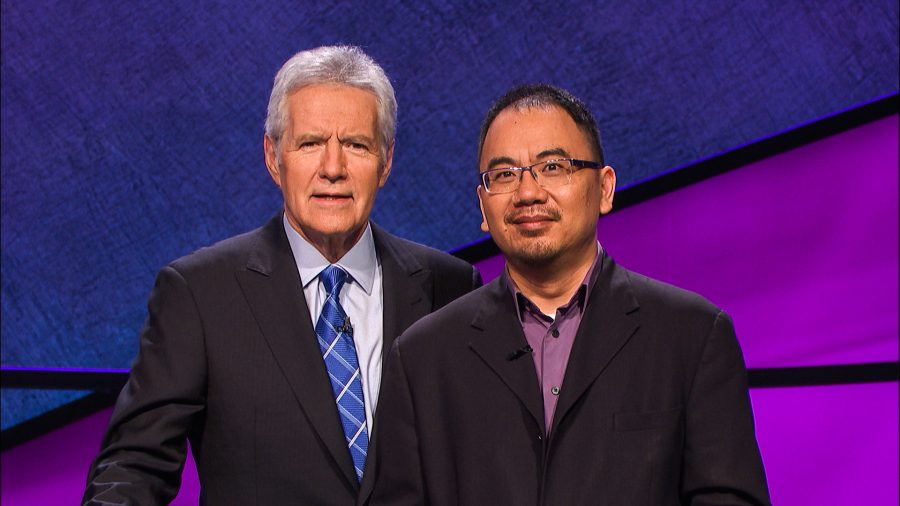 Assistant Professor of Music Theory Andrew Pau joins host Alex Trebek on the Jeopardy! set before one of Pau’s six consecutive wins. He excelled in various topics, including Shakespeare and U.S. governors.

Assistant Professor of Music Theory Andrew Pau ended a six-day winning streak on the game show Jeopardy! Tuesday, walking away with $170,202 in total winnings. Pau, who has taught at Oberlin since 2011, was selected to compete after two unsuccessful auditions and more than a year of vetting. He completed a timed online test and participated in a mock taping in Detroit before producers invited him to play at Sony Pictures Studios in Culver City, CA, in March.

Pau said he did not prepare extensively for the show, aside from reading about how to wager. “I was too busy to even think about anything,” he said. “I didn’t study the almanac or anything like that.”

Five consecutive episodes — a week’s worth of Jeopardy! — are filmed in a single day. Pau debuted on, and won, the final game on his first day and emerged victorious in all five of the following day’s contests. He said he was surprised to win even a single game, let alone six in a row.

“I was pretty happy with one [win],” he said, “because I was so far behind that first game. … Everybody else was so fast. At the second commercial break, I was at $400, and they had $10,000 or something like that. I don’t know how it happened, but at the end, I was in the lead. And I think after the first game, I just loosened up and played for fun.”

In which categories did Pau fare best? Not music, he said.

“Country music — something I know nothing about — came up on my very first game,” Pau said. “I was just standing there. And then classical music came up, and I didn’t run the category, which you might have expected me to. You’re playing against other players, and often, everybody knows the answer. You’re just trying to beat each other to the buzzer.”

Instead, Pau dominated in questions about Shakespeare and U.S. governors.

With longtime host Alex Trebek, “what you see is what you get,” Pau said. “We basically interacted with him as much as you see on TV. There was no backstage meeting; we were not introduced to him before any of the shows began. So the first time I was meeting him was when he came over to say, ‘What do you do?’”

“I think he kind of grew to like me as I kept winning,” Pau added. “I would like to think he was rooting for me.”

After briefly returning to Oberlin, Pau flew back to the studio the following week for his seventh game. He finished in second place. “I kind of wish I didn’t have to make that trip,” he said, “but that’s the way it goes.”

Although he cannot return as a contestant, Pau said he hopes to compete against the season’s top winners in the annual Jeopardy! Tournament of Champions later this year. “I think I’m currently first on the leaderboard,” Pau said. “So chances are I’ll get to go back.”