Feature Photo: The Wright Side of History 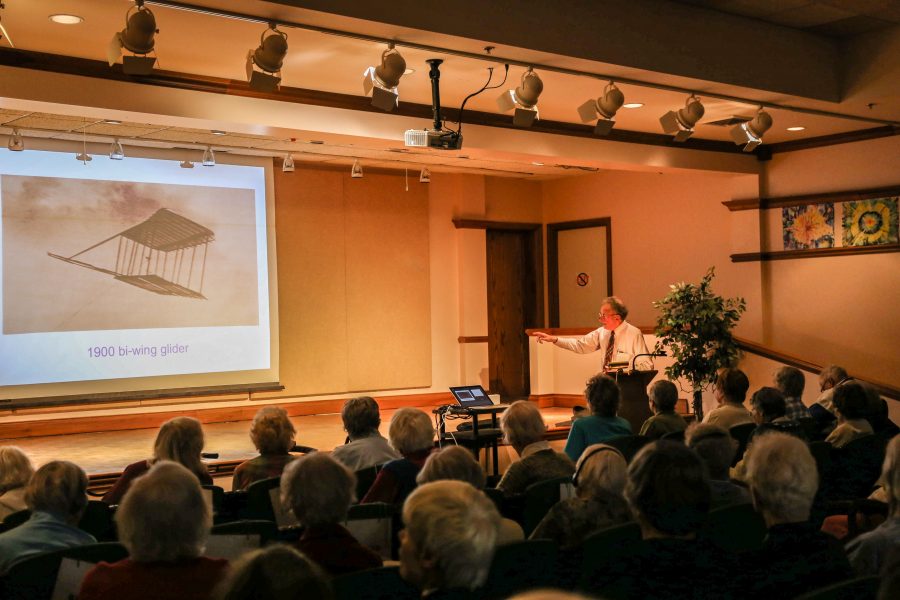 Norman Craig, OC ’53 and emeritus professor of chemistry, gives a talk on the Wright brothers sponsored by the Oberlin Heritage Center at Kendal at Oberlin’s Heiser Auditorium. Many are familiar with the story of the Wright brothers, from their bicycle business in Dayton, Ohio, to their historic first flight on Dec. 17, 1903 above the sand dunes of Kitty Hawk, NC. However, fewer know of the Wright family’s connection to Oberlin. The famous duo’s sister, Katharine, graduated from Oberlin College in 1898 and later became a trustee of the College. Craig brought to light the Wright family’s deep ties to the town in his talk Wednesday, “The Wright Brothers and Oberlin: A Mutual Adoption.”

Wright began her studies in 1893 at the Oberlin Academy, formerly known as the Preparatory Department of Oberlin College. After a year at the Academy and four years at the College, she graduated with an emphasis in Greek and Latin. According to Craig, though Wright moved on to a job teaching Latin at Steele High School in Dayton, she maintained a strong link to the College, Craig said.

“She regularly came for Commencement, she had friends that she interacted with, … [and she became] the second woman to join the Oberlin College Board of Trustees,” he said.

Wright was more outgoing than her notoriously shy brothers Orville and Wilbur. She effectively became the third member of the powered-flight team by accompanying her siblings on trips abroad and promoting their planes. In 1909, Wright and her brothers were awarded the Légion d’honneur, which is the highest order for military and civil merits in France.

“Because of Katharine’s regular visits to Oberlin, the Wright Brothers came with her, and they became more and more acquainted with Oberlin through their sister,” Craig said. “She was the affecting link. As a consequence, they began to think of Oberlin as their college, even though they never went to college.”

The Wright brothers received honorary degrees from Oberlin in 1910. Craig said the same citation was read for each of the brothers: “Careful and thorough investigator of the laws of mechanical flight, ingenious inventor, bringing the air within the dominion of man.”

“She was the link between the Wrights and the world,” Craig said, adding that she was also the “linchpin” of the family. In 1931, two years after Wright died of pneumonia at age 54, her husband Henry Haskell, OC 1896, memorialized her by having a fountain installed at the southwest corner of the Allen Memorial Art Museum.