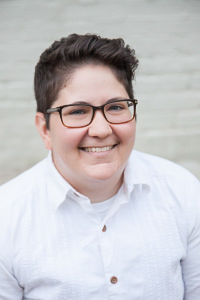 Miriam Zoila Pérez is a doula, reproductive rights activist and blogger. She has written and self-published her own guide for radical doulas.

Miriam Zoila Pérez is a queer Cuban-American doula, reproductive rights activist and blogger. In 2007, she founded the Radical Doula blog, which unites doula work with birth activism and social justice. Pérez wrote and self-published Radical Doula Guide: A Political Primer for Full-Spectrum Pregnancy and Childbirth Support, which has sold more than 2,000 copies. She came to campus to host the “Radical Doulas + Reproductive Justice” talk and workshop on Tuesday and Wednesday, respectively.

What does the term “doula” — and the responsibilities it encompasses — mean to you?

A doula is a person who’s trained to provide support to people during pregnancy and childbirth. That support is usually emotional, informational and physical — you can think of a doula as like a birth coach. … [They also might] make suggestions about resources for the process or things to think about — questions to consider — when making a plan for how you want to give birth, whether you want to be in a hospital or in a birth center or at home. [In] all those different contexts people provide doula support. Some doulas work postpartum — after the pregnancy and childbirth — supporting the new parents at home. Then there are also doulas who provide support during abortion, miscarriage and adoption, and those are often called “fullspectrum” doulas.

What does it mean to be a “radical doula”?

That’s a terminology I’ve used for the last nine or so years to talk about my work. Initially, it was really about feeling alienated within the broader doula and midwifery birth-activist community. I felt like the fact that I was prochoice and supportive of all options around pregnancy, that made me feel alienated from the broader community. The fact that I’m queer, the fact that I’m Latina, the fact that I’m genderqueer, there are all these different identityand politics-based things that made me feel like I wanted to talk about how I stood out or how I was different from some of the more mainstream doula communities and movements.

So that was why I started using the term “radical doula,” and I started a blog nine years ago under that nomenclature to really just talk about the different perspectives I had and why they made sense. … I don’t own the term; lots of different people use it in different ways. I have a series called “Radical Doula Profiles” where people who identify as radical doulas [answer questions] about how they see it and what it means to them. I don’t own the word “radical” or the word “doula,” so I tried to keep it really broad and let people … define it for themselves. These days, the terminology is less about my identity and more about a perspective and an approach to doula work.

You addressed in your talk how the process of childbirth has changed in our culture and that most deliveries happen today in professional hospital settings. Why is that change significant?

Today, I think that 97 percent of people in the U.S. give birth in a hospital, and that is a dramatic shift from even just the beginning of the 20th century. The development of obstetrics as a medical field is relatively new compared to some of the other medical traditions. … It’s just [in] the last couple hundred years, if even that, that we’ve medicalized [maternity care] and made it something that is the domain of doctors.

Why is it significant? It just dramatically changed that experience for everyone involved. … Initially, it was actually pretty unsafe and there were a lot of complications — we didn’t really know what we were doing. These were all male physicians and male doctors who kind of learned how to do this by working on women but didn’t necessarily learn from the midwives who’d been doing this forever; they were developing their own approach to it.

There was this process of [making] birth in the hospital the dominant way of doing things that started with wealthy, upper-middle-class white women being the ones who gave birth in hospitals, and there was a lot of segregation and racism in the U.S., so African-American women, particularly, [weren’t able to] access hospitals until decades later. There’s a longer history of Black midwifery tradition in the South because of that — those women were still serving their communities. But eventually that sort of “campaign” against midwifery and toward hospital birth was really successful to the point where by the ’70s there were almost no midwives practicing in the U.S. anymore. Now there’s been, in the last 40 years, a push back toward midwifery care.

Why is it important to bring this practice of caring more directly for patients back to our communities, and how does the hospital setting emotionally affect people?

I just think our medical system is not really equipped to handle people’s emotional needs. It’s an environment where you go for expertise, [in which] you go to be treated by someone who knows so much more than you do about your health and your body, and I think that’s the dynamic that most providers bring. So that piece of a holistic approach to someone’s health — and also really recognizing that they are the expert about their body, and that they may not be a doctor, they might not have a medical degree, but they know a lot about what their body feels like and what their body’s experiencing — I think that expertise is really ignored in hospital settings and in medicine as a whole because it’s just not built into that training of it. … I think nurses were meant to do some of that, but in the context of our modern medical system they’re overtaxed and focused on things that don’t necessarily leave room for that kind of emotional support. Doulas were like this disruption, this intervention that tried to offer people a more supportive, client-centered experience where someone was there to cheer you on and help you have the experience you want to have, and often those people lean toward a more natural approach to childbirth … although I don’t think that that perspective is necessary. I think doulas should just help someone figure out what they want and support them through that, even if what they want is a very technological birth — but that’s a point of contention with some doulas. So it’s providing that really nonjudgmental, “You know what’s best for you. I’m going to be the cheerleader who … supports whatever it is you decide,” rather than being an expert who comes and says, “This is what you should do. I know what’s best for you.”

How have you applied the concepts of reproductive justice that you discussed in your talk to your work as a doula?

I think the piece of that framework that is really important to me is that if our work is going to be really social change-focused, we have to put the people who are most impacted and most marginalized at the center. A lot of the work of the birth activist community has focused on improving the experiences of women who already have a lot of privilege and a decent experience of hospital settings — and when I say “decent experience,” it doesn’t mean that they’re necessarily being treated that well or having the experience that they want, but they’re not dying and neither their children nor themselves are becoming sick or disabled by the process of pregnancy and childbirth. [Activists are trying to improve] things like the fact that African women in the United States are four times more likely to die during childbirth and pregnancy than white women. There’s been this movement of birth activism over the last few decades, but it’s really only been focused on improving the experiences of a group of already relatively elite white women. That’s a generalization, but the research shows that [those are the people] going to birth centers and getting midwifery care and the people who are getting to reap the benefits of even doula support. So to do it from a reproductive justice perspective, you have to put at the center the women and the people who are most impacted.

How has the world of doulas shifted in recent years, and what could that mean for the future of maternity care in the U.S.?

I feel like way more people know what a doula is now. I mean, [consider] the fact that there was a room of what, 30 or 40 students last night at Oberlin, and when I asked how many people wanted to become a doula

half the people raised their hands. That’s incredible. When I was in college — I graduated 10 years ago from a liberal arts college — nobody knew what the hell I was talking about when I said I was a doula. There’s definitely been a lot of visibility. Ricki Lake has a documentary on Netflix called The Business of Being Born, and that brought a lot of prominence to the issue of maternity care. Even [in relation to] the Affordable Care Act — [Obama] has highlighted a lot of the issues with maternity care, because we spend more money on it than any other developed nation per capita, and our outcomes are worse than, like, 80 other countries, so something’s not working. … [What] made me start the “Radical Doula” blog initially [was that I was] feeling alienated and like I was alone in my politics and my identity, [and] that’s not true at all anymore. It feels like there’s a whole world of radical doulas and queer doulas and doulas of color and people who are pro-choice and doulas. Now I don’t feel that alienation at all.