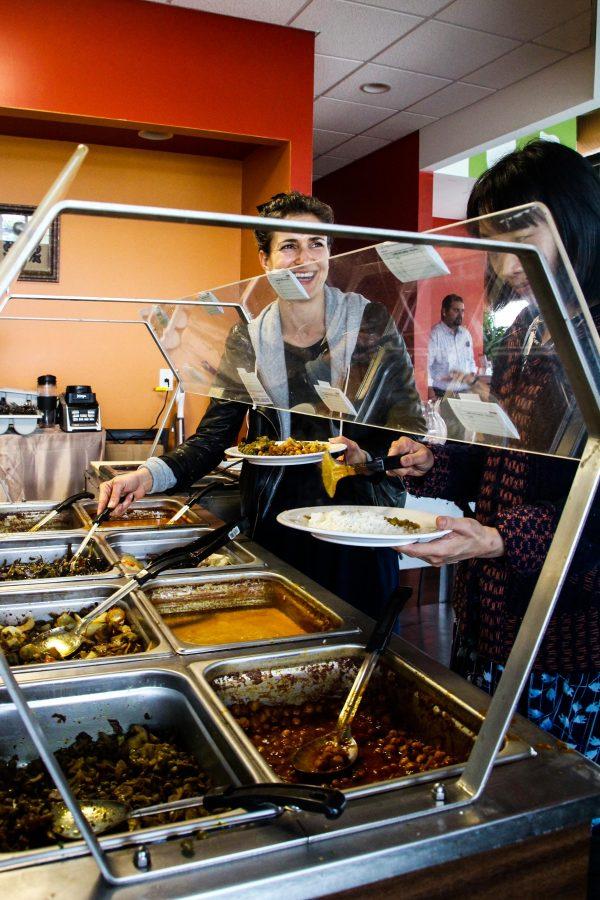 Oberlin community members and College students alike have associated the large glass windows on the corner of East College and North Pleasant Streets with quality pizza for over five years. When Magpie Pizza closed its doors in the fall, many Oberlin residents were left wondering — what would supersede the pizza creed?

Though they have yet to place a sign, the answer came in the form of India Garden, which opened its doors April 21. The Oberlin location is the third India Garden to open in Ohio, though its focus on northern Indian cuisine separates it from its counterparts.

Nitin Bhutani, India Garden’s manager, spoke to the myriad cuisines of the various states of India.

“In India, every state has a different cuisine. In southern India, they eat more rice and fish, and the northern Indian food has much more meat,” Bhutani said. “Northern India has more lamb and chicken, which is the biggest difference [in addition to] the spices.”

Bhutani, the brother and cousin of coowners Ramesh and Sanjeev Sharma, was the authority on where the newest establishment would find its home.

In addition to being the only Indian restaurant in the area, Bhutani explained the welcoming and diverse environment of the town made Oberlin the “perfect place”.

The two closest Indian restaurants to Oberlin are Bhelwala Indian Street Food and an India Garden restaurant on Detroit Avenue in Lakewood. Neither of them serve the same kind of food that Oberlin’s India Garden serves, and this new location will be the most accessible and unique one in the area.

“We saw that Oberlin didn’t have any place like India Garden, and we are actually the first [Indian] restaurant in Lorain County,” Bhutani said. “[Oberlin] is a nice, small town with a university. There is a lot of diversity here, [and] people like to try different kinds of food.”

Vicky Singh is the head chef at Oberlin’s India Garden branch. Singh was born in northern India and, after spending several years at a culinary academy there, came to the United States. He spent over 10 years working in an Indian restaurant in Pittsburgh before coming to Ohio.

Singh was asked to run the Oberlin location after cooking for the India Garden locations in Lakewood for almost four years.

The space that Wild Mango currently occupies originally opened as Weia Teia back in 1994. Head chef and owner Jia Wei sold the property last September to Jennifer Sale, who opened the restaurant as Strange Bird Bistro, but the business struggled and after six months, Jia decided to reclaim the restaurant and reopen his old establishment with a new twist.

The manager of what is now Wild Mango, Paula Clark-Litke, said that the Strange Bird just never really took flight.

“[Their] menu may have been too odd for people, and it never caught on,” Clark-Litke said. “The [restaurant] also never had a grand opening and failed to gain a support base like Weia Teia had.”

While Litke said that she thought that people tended to generalize Wild Mango as a steak and seafood restaurant, Wild Mango is really more of a product of Jia Wei’s personal culinary creativity.

“It’s a chef-driven, multicultural cuisine. Some people like to refer to it as Asian fusion – we don’t really like to go with that,” Litke said. “We say that it’s just creations by our chef, Jia Wei, who creates all of our dishes, and [that] it’s his kind of take on traditional cuisine.”

Litke praised what she considered to be Jia Wei’s best dishes, including a Romano shrimp with sweet potato fries and spinach with curly noodles. Litke also commended Jia Wei’s calamari dish and her personal favorite, the scallops, referring to them as “little pillows of heaven.”

While Wild Mango is returning to its roots, the Black River Café turned over its soil with a recent change in ownership.

The Black River Café has been one of Oberlin’s cornerstone institutions for the last 18 years. Chef Mike Joseph, the new owner, shared what changes should be expected for the restaurant.

“We remodeled the place and gave it a whole new look. It needed it; the place has been here for 18 years,” Joseph said. “We tried to improve the service, added more trained staff and a better [system] to help the service move a lot faster.”

When asked if the menu would see any changes, Joseph explained that the current menu would stay intact with some new additions coming largely through daily specials.

With the addition of India Garden to Oberlin’s already thriving restaurant scene, community members and students will be able to enjoy a new range of options available. As changes continue, Oberlin’s small businesses are striving to thrive.