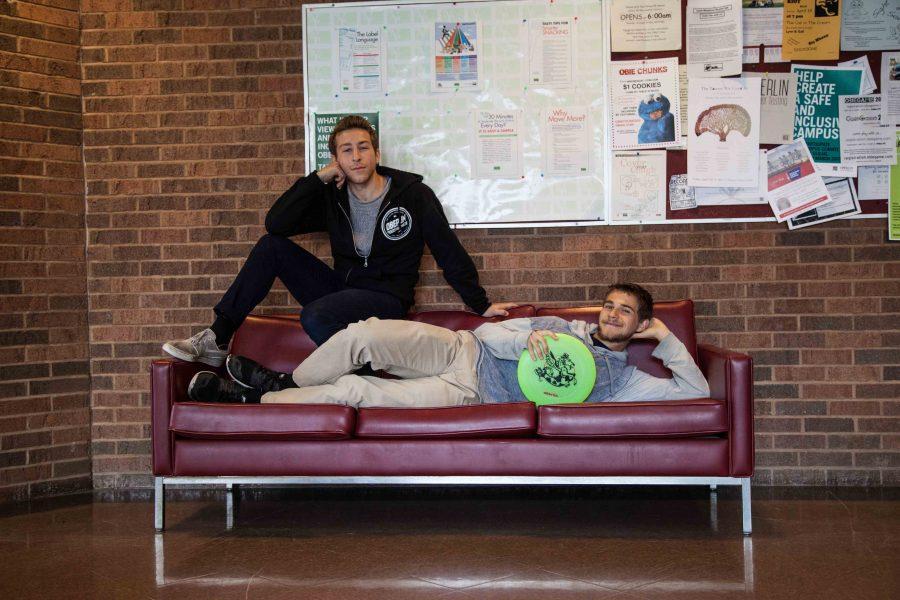 This year, Oberlin is hosting the Ohio Valley, USA Ultimate Regional Championship for both the men’s and women’s leagues. This week, the Review sat down with the captains of Oberlin’s men’s Ultimate Frisbee team, The Flying Horsecows, seniors Jacob Gilbert and Jason Freedman to discuss the mechan­ics of hosting a regional tournament, the benefits and challenges of playing at home and what Oberlin students can expect from the teams this weekend.

Could you talk a little about the tournament you’re hosting?

Is it considered to be just the Flying Horsecows hosting this tourna­ment or both you and the Preying Manti?

JF: It’s Oberlin, in general, hosting these two competitions, but I was the one who put in the application to host the tournament. So in that sense, it sort of came from our side, but mem­bers of both programs are helping.

What goes into the application pro­cess, and what do you have to do to prepare to host?

JF: The application process is pretty straightforward. USA Ultimate — which is sort of like the NCAA but for Ultimate — they just have this ap­plication form that you fill out, talking about what your facilities are like, how many fields you can have, how close together they are, [if you] can provide water and basic amenities. And after filling out that form, it was just a mat­ter of talking a little bit more with the regional director and convincing him that we were a good place to have the tournament. [In terms of] setting it up, we’ve gotten a ton of help from Di­rector of Recreation and Club Sports Betsy Bruce. We wouldn’t be anywhere without her, and a lot of members of our B-teams who aren’t going to be competing this weekend are step­ping up for volunteer jobs, which is really great. And we actually have an alum of the Horsecows who’s coming in — we’re paying for his flight — but he’s going to work as the tournament director for the whole weekend, pretty much pro bono. He’s Evan Holliday, OC ’15, who was one of the captains last year.

JG: Basically, both days, we arrive before all the other teams, make sure the fields are ready [and] the food is there. In past years, we’ve had people with cars shuttling food and stuff to the fields, and everyone has a job.

Do you see hosting this tourna­ment changing Oberlin Ultimate Frisbee’s image in the eyes of other schools or on campus?

JG: I think it’s always really excit­ing when people come to watch us play, because even though Frisbee has a strong presence, it’s a large group of people, and it’s pretty ubiquitous in the school. It’s not really a type of sport where people come to watch as spec­tators. And partially, that’s because we usually play tournaments else­where, so this will be an opportunity for people to actually see what we do. We have a home tournament in the fall where people do come watch, and that does happen, but this is going to be much more intense, probably, which is exciting.

JF: I definitely think, in terms of what people think about Ultimate on campus, if people come and see or hear about it, I definitely think it will broaden their understanding of how seriously people do take this game. In terms of the Ohio Valley Ultimate community at large, it’s nice to be ac­tually hosting a real serious event. We haven’t hosted this event in a couple decades, so it’s a good way to give back to the community.

How do you think having a home-field advantage will factor into your team’s play?

JF: If there’s a home crowd, that would definitely be really cool, and it could be a factor in getting people psyched to play if they’re playing in front of fans.

JG: On the other side, when we go to tournaments, it’s such a con­centrated experience, because you only see your teammates, you sit in a car with them for [a number of] hours, you sleep in the same hotel, you wake up and you’re constantly stretching and hydrating, and all you’re really thinking about is fris­bee. So I think, in that sense, we have to try to create that environ­ment at home as well.

JF: We’re actually having a team meeting to talk about how we main­tain our focus and get everything done that we need to get done, when at night we’re all going to go back to our separate rooms, to whatever distractions there are here at Ober­lin over the weekend, and how we’re going to deal with that. Should be an interesting challenge.

JG: And even just making sure people wake up on time and get to the fields [is important]. I don’t want people and myself to be think­ing about homework, or the dance showcase. People should be doing that — and I’m going to be doing that Saturday night — but when you play in these tournaments, you re­ally need to get in the zone to play at the highest level. It’ll be different, but I think we’ll be able to manage it.

As seniors, do you see this tourna­ment as being a good cap to your seasons and careers?

JF: I think it’s a good way to cap things off. Playing what could be our last tournament here at home, it could be really fun. I feel sort of at peace with whatever happens at this tournament. We’ve worked really hard. I think our class in particular has walked the team through a significant amount of progress, and we’ve really built a good program, and I’m confident that what we’re leaving behind will be a re­ally great frisbee team for many years, which is cool.

JG: I feel similarly. As much as we want to win, the last thing I want is to leave feeling disappointed, so I’m defi­nitely going into it with [a mindset of] just playing really hard and cherishing it and having a ton of fun. But I also think — I was talking to another teammate, senior Ben Rabin, last night — and we were saying that the only way we can re­ally leave this tournament feeling good is if [we] gave it everything. So I’m plan­ning to play the hardest I’ve ever played.

JF: Yeah. I don’t want to be able to walk for a week [afterward].

Do you have anything to say to Ober­lin students who are considering coming to watch?

JF: I want people to come watch. It’s a really fun game to watch. And our region in particular is really strong — there are a lot of really good teams, but also a lot of good players that are really exciting to watch. So I think it’ll be a good showcase of the sport, and if people come out, they’ll be really impressed.

JG: I definitely want people to come see us play but also see the heart that goes into it. Because on our team, it’s re­ally 50 percent the sport and 50 percent community and attitude and growth and becoming better players and people. The way we psyche ourselves up during games and at tournaments, especially, is all based around that. It’s a really positive, beautiful thing, and I would love it if more people could see that.