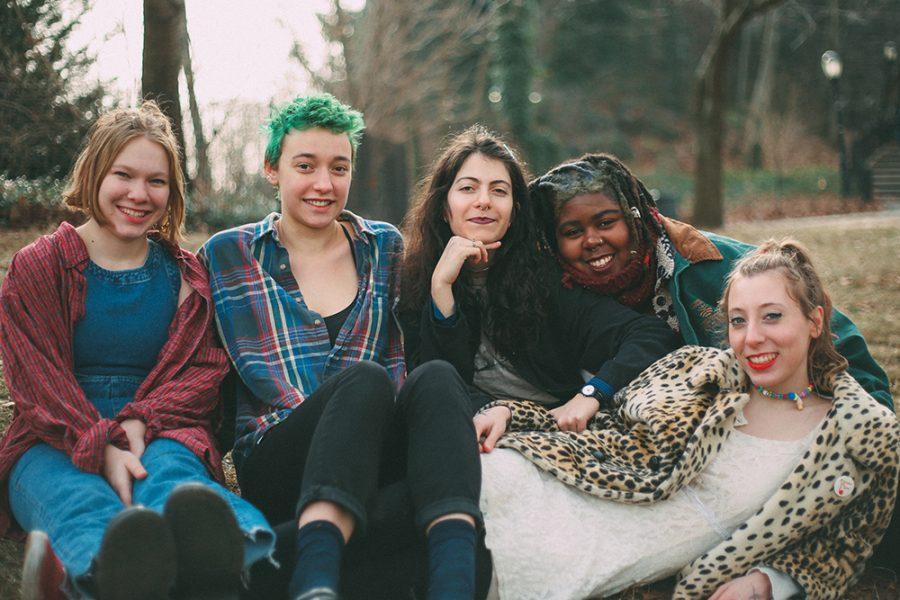 There’s always that one college band everyone knows has a chance to make it big. At Oberlin, that band could be T-Rextasy.

The band has already received prominent media attention from outlets like MTV and boasts a significant fan base. Singer and College sophomore Lyris Faron and bassist and College sophomore Annie Fidoten, who attend Oberlin, are joined by drummer Ebun Nazon-Power from Green Mountain College, guitarist Lena Abraham from Hampshire College and guitarist Vera Kahn from Grinnell College. All the band’s members are feminist punkers, saucy lyrical masters and pioneers of a new era of music: “fun rock.”

Fidoten said she put in a lot of effort to join the band. “I basically begged to be a part of [Faron’s] rock band even though I didn’t know how to play bass at all,” she said. “And spent a lot of sweaty nights watching bass tutorial videos so that I could keep up.”

T-Rextasy has released work on its Bandcamp since 2014’s Dino Demos. Its single “Ms. Dolores” portrays the chaos that erupts after an underappreciated school lunch lady quits and stops serving meatloaf to hungry children. This May, T-Rextasy released its album Jurassic Punk, with tracks like “Chik’N” and “Gap Yr Boiz.” In “Chik’N,” Faron rejects cutesy nicknames often given to women, declaring, “Don’t call me cupcake or honey pie / Pet names make me want to fucking die.” “Gap Yr Boiz” hilariously mocks privileged, liberal arts college boys (with names like “Seafaring Steve,” “Eco-Terrorist Eric” and “On-the-Road Ronnie”) who take a year off to “leave to find themselves in the goddamn forest.” After long descriptions of their appropriative and hypocritical behavior, Faron concludes emphatically, “And they all had dreadlocks!”

College sophomore Sophie Kemp, a fan of the band, said its music is special in part because its political goals and style are juxtaposed in a unique way that results in an unexpected sound. “It’s not punk in the way people want to associate feminism with punk music,” she said. “I think the way they match their feminist lyricism with their weird trippy ska/ rockabilly sound is where they are really different.”

Though members of T-Rextasy hail from New York, Faron said it’s difficult to integrate into the New York punk scene while attending Oberlin. “[Being at Oberlin] pretty much only hurts us,” she said. “Ideally, though, our absence from the outside world gives us an air of mystery and leaves people wanting more.”

Fidoten added that she and Faron have considered taking a semester off to perform and record in Brooklyn. “But then Lyris says that thing about an ‘air of mystery,’ and ‘we need to finish school and not be like those dumb boys who drop out to make sick beats,’ and I feel temporarily placated,” Fidoten said.

While in Oberlin, the band is taking advantage of opportunities on campus. In October, it opened for Girlpool, and the group has played many house shows. Faron has also performed on WOBC’s Live for Studio B.

The surrounding cornfields have not slowed the amount of media attention T-Rextasy has recieved. In April, NPR Music featured “Gap Yr Boiz” in a “Songs We Love” post, Pond Music Blog did a spotlight interview with the band and MTV compared the band to groups like PWR BTTM, Frankie Cosmos and Tacocat, deeming these artists influential to the new “fun rock” genre.

Fidoten said the group is proud of how the media has portrayed them. “It feels really cool to read something people wrote about you and realize they get it, which is something that I didn’t think would happen,” Fidoten said. “I … feel really lucky.”

In addition to the band’s danceable tone and whimsical, insightful lyrics, T-Rextasy often infuses underlying feminist messages into its songs. While many all-women bands struggle with media outlets and fans perceiving their gender as the band’s defining attribute, Fidoten was pleased that media outlets haven’t labeled them that way. “We noticed recently that all of the press we’ve gotten so far hasn’t referred to us as ‘all-girl band’ or ‘female band,’ etc., which has been really exciting,” Fidoten said. “Even though being a band comprised of women is important to us, we had seen so many articles cashing in on the ‘girl’ aspect and selling bands as gimmicks, and I’m really happy that we haven’t dealt with that yet.”

Fidoten and Faron said that they find it cathartic to write songs about their frustrating experiences with men, yet Faron said she hopes to spend less creative energy on them in her songs. “Even though the songs are always a critique of boys and/or have some feminist spin, the art is still about them,” she said. “This attention, though negative, still gives them a kind of power. I’ve decided to write less songs, if any, about boys.”

Fanon says the band’s plans for the distant future are “world domination.”