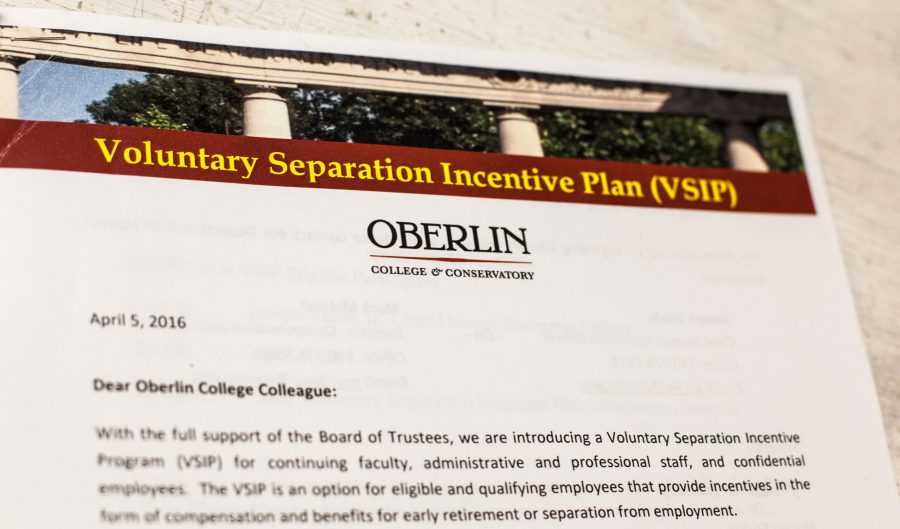 The College’s Voluntary Separation Incentive Plan encourages faculty and staff to retire early in exchange for a significant compensation package. This plan is projected to save the College $1.5–3.5 million per year.

Over the next three weeks, 177 faculty and staff must decide whether or not they want to take the College up on its offer to retire early in exchange for a relatively hefty severance package.

The deal, which administrators are projecting will save the College between $1.5–3.5 million per year, is known as a voluntary severance incentive package and is the first step in the administration’s long-term plan to cut spending while slowing the rate of tuition increase.

The payout is relatively straightforward. If a qualifying faculty or staff member — one who is at least 52 years of age, has held their position for 10 years or more and for whom the combination of age and service is a minimum of 75 years — chooses to take the deal, the College will pay the retiree one year’s salary and waive health insurance premiums for the first year after retirement.

“The places I’m familiar with that have done it have found that it’s really been a win-win,” College President Marvin Krislov said. “It’s helped people retire in a way that preserves their dignity and gives them some extra money, and it helps the institution in that it allows for predictability.”

However, one clause in the contract has a contingent of concerned faculty and staff questioning the College’s intent behind the buyout: a non-disparagement clause, which makes it illegal for anyone who takes the severance to publicly criticize the College or other signees.

“I was shocked to see this included in the contract,” said Roger Copeland, professor of Theater and Dance, who called the clause a “drastic” measure to protect the College’s public image.

The clause itself was a product of “outside legal counsel,” said Michael Frandsen, vice president of finances and administration. The College affirmed that, in these types of agreements, confidentiality stipulations are best practice. Organizations typically use non-disparagement clauses to restrict employees from discussing the details of their departure, including the contents of their severance packages.

While it’s rare for academic institutions to include non-disparagement clauses in voluntary severance agreements, there is some precedent. New York University included a similar stipulation in a faculty retirement contract, though it removed the clause in January after a committee of faculty expressed concern over the language’s implications for academic freedom.

Oberlin’s non-disparagement clause technically violates employee protections under the National Labor Relations Act, which prevents employers from interfering with employees’ right to discuss workplace conditions or criticize their employer. These protections are only extended to staff members who do not occupy administrative positions.

“Those kinds of conversations are important to protect, because they can lead to further actions as a group,” said Risa Lieberwitz, chair of Cornell University’s department of Labor Relations, Law and History and general counsel to the American Association of University Professors. “I was surprised to see [the clause]. … I don’t understand why Oberlin wants to do this.”

Lieberwitz added that the adoption of a non-disparagement clause by an academic institution undermines principles of academic freedom and faculty governance, a sentiment Copeland shares.

“Academia is supposed to be a marketplace of ideas, of which criticism is an important part,” Copeland said. “When faculty don’t have a say in the future of the College, everyone suffers.”

Copeland said he’s concerned about the departmental restructuring that may occur if a high number of employees choose to retire. The best-case scenario, Copeland said, is that the College hires tenure-track employees to fill these positions.

In a worst-case scenario, he said, the administration would hire more adjunct professors or further neglect to consult with faculty regarding future institutional changes borne from financial limitations.

Like other eligible employees, Copeland’s contract arrived at his home via FedEx April 9. After meeting with a group of faculty and staff —nearly all of whom, Copeland says, were extremely disgruntled by the wording and timing of the contract — Copeland decided to consult with a lawyer to parse out the possible implications of the contract.

Of particular concern to those present at the faculty meeting was the contract’s potential effect on two pillars of Oberlin’s self-billed legacy: faculty governance and academic freedom.

The contract was examined by a relatively small number of faculty members before arriving on the 177 doorsteps. Some critics remain unconvinced that they would have any say in the departmental reconstruction and consolidation that often follows mass buyouts.

“Through shared governance processes, this is an area where faculty collectively should be very strong in exerting their right to participate fully in any discussion about potential changes,” Lieberwitz said.

Barring the non-disparagement clause, VSIPs are relatively common among colleges attempting to save money without resorting to layoffs. Colleges who have enacted VSIP programs in the past typically see 15–30 percent of eligible employees take the offer. For Oberlin, whose VSIP program closely resembles that of Vassar College, enacting such a program could mean savings of up to $17.5 million over the next decade, depending on the extent to which the College replaces participants or reorganizes departments.

Given the College’s current financial standing — Frandsen has repeatedly stressed the unsustainability of Oberlin’s present financial track — these types of programs are not only cost-effective but can often be the most sympathetic toward employees.

It seems obvious that the first place to start would be voluntary retirement,” said Chris Howell, professor of Politics and chair of Oberlin’s Compensation Committee. “Because when you exhaust that, the next three things are forced retirement, reduced wages and reduced benefits. Those are the only things on the table.”

President Krislov said these types of measures aren’t on the College’s radar, though that does not negate the possibility of institutional change borne from future cost-cutting initiatives. Because the Board of Trustees ruled earlier this semester to slow the rate of tuition increase from 3.9 percent to 2.8 percent in the 2016 fiscal year, the College will inevitably have to offset $2.1 million in reduced gross income.

In cases like these, it’s not so much the “how” as the “who.” Oberlin is a tuition-driven institution, with personnel costs making up the majority of the spending. This means that when tuition revenue goes down, the College must also reign in aggregate spending on its employees.

Salaries, wages, benefits and more administrative and professional staff positions could all end up on the cutting room floor should the administration need to further reduce costs.

“The College will be taking millions of dollars out of the budget to offset the slowing of tuition rates, and those costs are going to be personnel costs,” Howell said.

When reducing their budget, colleges often look for positions whose responsibilities can be reallocated across multiple employees. While this may not be particularly concerning to professors in larger departments — the more students enrolled in a particular department, the more likely that department will retain existing positions — smaller departments and administrative and professional staff may feel some tremors.

OCOPE members have been shouldered out of positions before, said Diane Lee, second vice president of OCOPE and interlibrary loan supervisor. Lee said she has seen “far too many” instances of OCOPE members leaving their posts only to be replaced by temp workers who do not receive benefits, overtime or more than $15 an hour in wages.

“We hope the College will recognize the need for these positions to remain held by hard-working staff members,” said Sandy Kanuch, president of OCOPE and computer operator at the CIT.

With nearly half of its membership eligible for the buyout, OCOPE may need to rely on more than just strength in numbers as it continues contract negotiations through June 30.

All eligible faculty and staff have until May 23 to decide whether or not they will sign the contract. Signees may then rescind their decisions for up to seven days, after which the College will issue determinations on June 3. The contract grants the College the right to terminate or modify the plan at any time and for any reason.

Neither Copeland nor Kanuch said they were aware of any plans to protest the clause or the contract as a whole.