The Oberlin Review • May 6, 2016 • https://oberlinreview.org/10565/sports/in-the-locker-room-with-sarena-malsin-and-randy-ollie/

In The Locker Room With Sarena Malsin and Randy Ollie 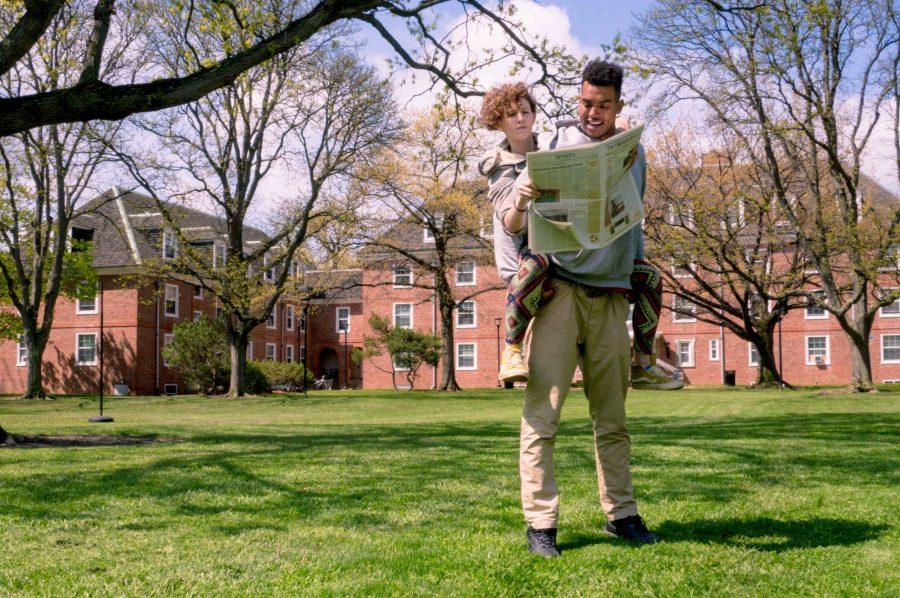 This week, the Review sat down with itself — well, with Sports editors Randy Ollie and Sarena Malsin — to discuss their favorite parts of the job, their ideas for the future of the Sports section and their plans after graduation.

What made you want to be a Sports editor for the Review?

Randy Ollie: I was friends with the previous Sports editor, Nate Levinson, last year, and I also wrote for the Sports section for the entire year. I really enjoyed writing a lot, so when I saw an opening for next year — and I was looking for another job as well as a way to get more involved with Oberlin athletics — Nate really encouraged me to apply, and I took his advice. The rest is history.

Sarena Malsin: I wanted to be a Sports editor because I’ve been interested in journalism since high school, and I’ve been a sports writer since my sophomore year. I wanted to continue that and to be more involved with the Review. I always liked writing for the Sports section because it kind of gave more attention to a part of Oberlin that people don’t usually give much attention to. I love sports and I love writing, and they’ve both been a big part of my life, so it was a good combination of my two favorite things.

RO: My favorite part about being a Sports editor would have to be a tie between writing editorials and interviewing people like coaches and other athletes. It’s been a cool experience for me. Although I did some interviewing last year when I was just a writer, this year I’ve gotten the chance to speak to a lot more coaches and a bunch of athletes, a lot of whom I would always see around the gym but never really got a chance to talk to. I love editorials because it’s a chance to write about what interests you most. I got to do a lot of topics about the NBA and FIFA, which are two things I follow passionately. [My] least favorite thing would have to be a person: my managing editor Vida Weisblum. I can’t really go into the details as to why, but anyone that knows her should be able to get it.

SM: I would have to agree that the interviews and the editorials are the best part of the job. I love doing the “In The Locker Room” interviews because it’s so fun talking to people about what they’re passionate about. Having a conversation with someone and watching them get excited about something they love doing is awesome. For the editorials, I’m really passionate about women’s soccer specifically and societal issues in sports, so it was cool to combine those two themes and go on the occasional rant in the paper. I don’t really have a least favorite thing besides Randy being the worst, of course. Randy might be the most annoying person I’ve ever met, although I do respect his skills playing Bloons Tower Defense 4. Sitting next to him 14 hours a week is pretty tough to get through.

What has been your most memorable moment in the Review Office?

RO: We have a wall of quotes, which are full of funny and memorable quotes from past editors and staff members. For someone who prides himself on consistently saying outlandish things, I almost went the entire year without getting anything on the wall. Finally, like, two weeks ago, I struck gold, and one of my quotes was unanimously voted to be put on the wall. I got to write it, and I don’t think I’ll ever forget that moment for the rest of my life.

SM: My most memorable moment was definitely writing my first editorial. I get pretty nervous and self-conscious about my writing, and I was writing about my past concussions playing soccer — a personal issue I have had in sports. I was really intimidated because it was my first week there. But a couple of coworkers came up to me and said it turned out to be a great editorial, and that made me feel awesome. It was a really great feeling to put [myself] out there and realize that the office is a great, supportive place.

What’s your favorite thing to do when you’re not in the Burton Hall basement?

RO: Ideally, when I’m not in the basement, I would be in a warm bath with a box of strawberry bonbons within reach. Unfortunately, there are not any bathtubs at this school that can fit me, or in life, for that matter. So I would have to say my go-to is shooting hoops or working out, hanging out with my friends and playing videogames. Just like most college students, a lot of my free time is spent not doing the ridiculous amount of work that I probably should be doing.

SM: My favorite thing to do has to be just being outside and moving my legs, jumping around and getting out some energy. It’s pretty rough when you’ve been sitting down there in that basement all night, underground, and you look up through the window and see only the legs of people walking past. I like going for runs, playing soccer, drawing and making comics. My newly discovered passion is Disco Zoo. I now spend most of my time doing that, and it’s been a great 24 hours so far. I look forward to a bright, beautiful future with Disco Zoo.

Editor’s Note: Sarena was playing Disco Zoo during the entirety of this interview.

What are your plans after graduation?

RO: My plans after graduation are not totally clear yet. Either I will move back to Chicago to continue working out and preparing for potentially playing basketball overseas at some point in the near future, [or] I also might stay in Oberlin and do something similar. If I went back to Chicago, I would resume working for Northwestern [University] Sports Camp as a summer camp counselor. If I stayed in Oberlin, ideally I could find a temporary job for the Athletics department or somewhere in town.

SM: I have a job working with Ohio Citizen Action, so I will be living with my friend in Oberlin. I think next year, I’m going to apply to grad school, but until then, I would like to figure some things out. A wise economics professor once told me that I should not jump into anything after graduation and spend some time in a place I enjoy around people I enjoy, so that’s pretty much my plan.

If you could improve anything in the Sports section, what would it be?

RO: Ideally, I would have loved to have more writers. Having a wide range of writers interested in consistently contributing would mean that Sarena and I could be much more flexible in the variety of content we put into the section. We could cover varsity, club and intramural sports, as well as any other wacky athletic things that we Obies get into on a sunny day.

SM: I’ve recently come up with an idea [to] create a network of stats and info with club and intramural sports captains so that Sports editors could have a resource to rely on when writing non-varsity articles. It’s really a shame, because we have some awesome club sports programs, but it’s harder to track down stats and info because they don’t have easily accessible stats on GoYeo or anything. But they deserve attention, too, because they’re a great part of Oberlin’s campus. So making an organized connection between captains and the editors would be super cool and helpful.

What would you say is the most important thing you’ve learned playing sports?

RO: I would probably say the lesson of perseverance. There’s that old expression that whenever you play anything, the only real opponent is yourself. Results may not always be favorable, but at the end of the day, you have to reflect on how you personally performed and what you gained from the experience. I hate losing — I’ll lock myself in my room for hours after a loss — but every game has resulted in some form of personal growth for myself. It’s just a matter of recognizing it.

SM: I definitely have a similar feeling. I played soccer and ran track for years, and the value of mental focus and commitment to accomplish something for yourself and no one else is a great feeling. Seeing the direct payoff in your strength improving or in winning a meet or game is super important. It’s an important lesson that you can directly impact how you perform and play in any scenario based on the work you put in and the mindset you choose to have.

What are you looking forward to during Commencement?

RO: I am most looking forward to doing nothing. I can’t wait to wake up every day to a blank slate of possibility and wonder. I will definitely be jumping into the Arb [pond] at some point, spending a good deal of my nights at the Feve and stumbling home from Agave a number of times.

SM: I’m really looking forward to being outside when it’s sunny, as well as also jumping into the Arb [pond]. I’m basically looking to do everything that I was unable to do in this crazy senior year. I’m going to make my own play-dough and break out some temporary tattoos I’ve been meaning to use. It’ll be wild. But really, having free time where I can breathe for a second and not constantly have things to do will be great. Also, [I’m] looking forward to petting mad dogs.