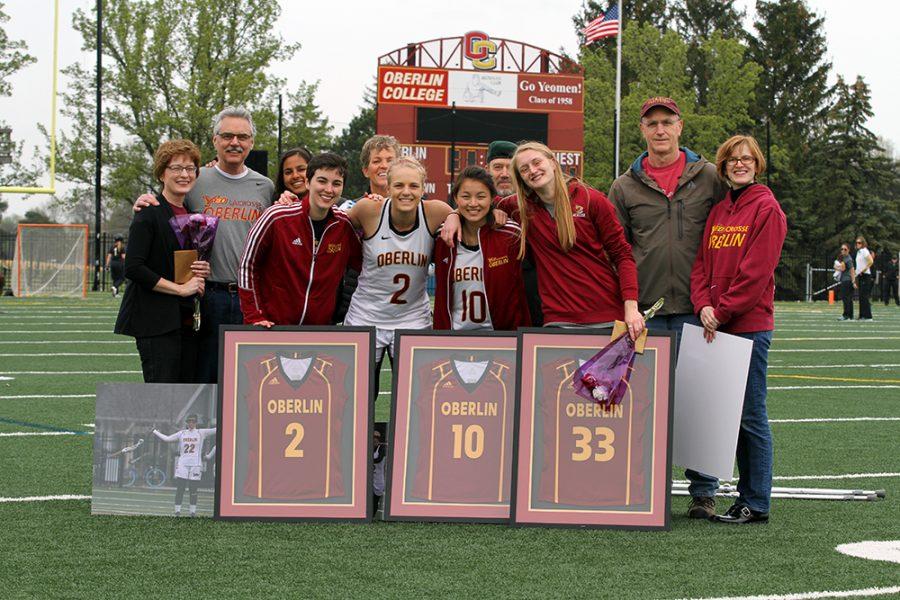 Seniors Emily Kipling, Taylor Swift, Suzanna Doak and Grace Barlow stand with their families during the women’s lacrosse team’s Senior Day celebration. The Yeowomen ended their season Saturday, losing a nail-biter to The College of Wooster 14–13.

The air was filled with tension as the women’s lacrosse team took the field against the College of Wooster Fighting Scots Saturday, as both teams had a North Coast Athletic Conference playoff bid at stake.

In a back-and-forth contest that featured plenty of offensive output and some drama, the Fighting Scots overcame a late-game comeback from the Yeowomen to win the contest 14–13.

The Fighting Scots answered back with a vengeance, scoring three straight goals and propelling themselves into the lead. After a game-tying goal from junior midfielder Hannah Heinke-Green, Wooster again mounted an impressive offensive attack, netting four consecutive scores to put the team up 7–3. A late first-half goal by Rauchle sent the Yeowomen to the locker room down 7–4.

Coming out of the half, the Yeowomen fell behind the Scots 10–5 after a flurry of Wooster goals. However, the Yeowomen mounted a furious comeback, netting four straight goals to cut the deficit down to just one.

Junior midfielder Michaela Puterbaugh described the four goals as the most pivotal moments of the game and an effort that highlighted the team’s resilience.

“That moment showed us that we were still in the game and could not give up.” Puterbaugh said. From that point on, I think we fought the hardest we ever have until the end of the game and did not let them have an easy win.” After the Yeowomen’s four-goal streak, the Fighting Scots found the net on two more occasions to bring the score to 12–9. The Yeowomen continued with goals from Rauchle, junior Sloane Garelick and Mullard to tie the game at 13–13 with just 7 minutes, 30 seconds remaining.

A low Wooster shot found the back of the net as the Fighting Scots reclaimed the lead. After regaining possession, the Yeowomen threw everything they had at Wooster goalie Isabel Perman but were unable to sneak a goal past her on multiple attempts.

After surviving Oberlin’s late-game push, the Fighting Scots kept the ball out of the Yeowomen’s reach as the final seconds ticked off the clock to earn themselves an NCAC tournament bid.

Rauchle said that a slow start and the lack of both Yeowomen senior captains held Oberlin back from victory.

“I think that we emerged as a team a little too late in the game,” Rauchle said. “I think that what really let Wooster jump ahead was how nervous we were. We had most of our starters out due to injuries during the game, on top of it being senior day with both our senior captains out as well.”

The impact of Barlow’s and Doak’s absence cannot be understated. In less than a full season, the pair contributed a combined total of 90 points to the Yeowomen offense in addition to providing crucial leadership for the team.

Puterbaugh said Doak and Barlow were important to the squad as both leaders and players.

“I can’t say enough how great Zanna and Grace were as captains this year, both on and off the field,” she said. “It was a tough adjustment when they both got hurt.”

Rauchle also said that the team’s plethora of injuries forced them to turn to many young faces in weighty situations.

“This year was such a crazy year in terms of injuries,” Rauchle said. “We started off the season with two people out due to injuries and ended it with seven. Every single person on the team really stepped up, and I’m really proud of how the season ended. Not many teams would be able to perform the way we did with half of our starting lineup on the bench.”

With the loss, the Yeowomen finish the 2016 season with a 10–7 record overall and a 4–4 conference record. While a fifth-place NCAC finish is not as great as the runner-up position of last year, Doak said the season is still a testament to the team’s progress over the last four years.

“When I first joined the team, I remember how small we were in numbers and how we couldn’t get through a practice without multiple dropped balls,” she said. “It’s crazy to look back at that having now gone to the NCAC championship game and been in a competitive position for conference play the last few years.”

“I also credit [Lynda] with really transforming the team when she first arrived,” Doak said. “Seeing this trajectory and the hard work everyone has put in, I believe the program is only going to get better.”

With another season in the books, the Yeowomen will look for a new crop of players to fill the shoes of the 2016 senior class. Whatever its form next year, the team hopes to build off of its hard-fought season finale to crush its 2017 season.