Under One Sun Catches Lightning 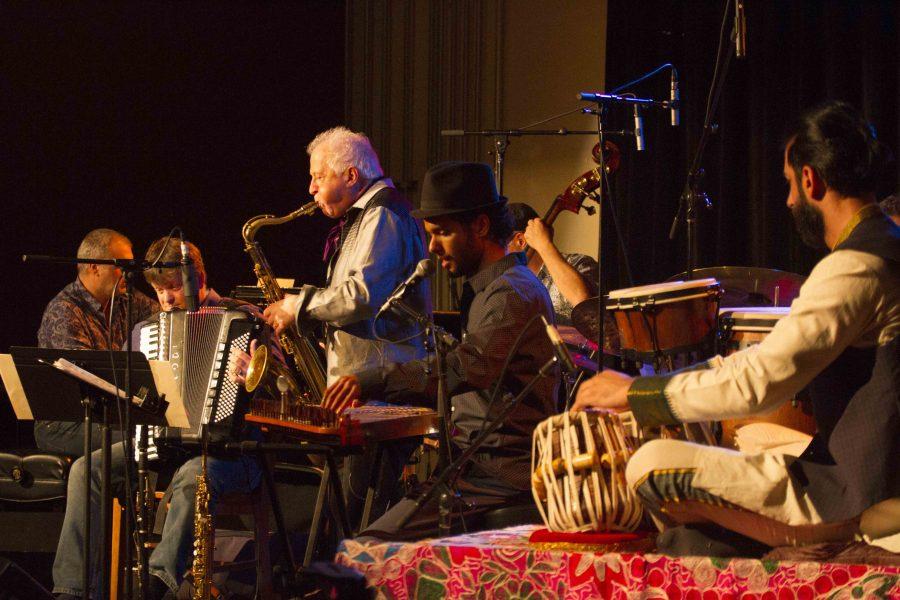 Professor Jamey Haddad performs with a diverse group of fellow musicians at the Cat in the Cream Wednesday. The  group aims to invite audiences into a world of musical positivity and harmony.

It’s been a long day of recording and before I’ve even managed to get out my list of questions for our interview, Jamey Haddad, professor of Advanced Improvisation and Percussion at Oberlin Conservatory, beckons me and the other members of his band over, holding a small container of an off-white substance flecked with green. He breaks off a piece with a spoon and tells me I’ve got to try it. It’s halva, a Middle Eastern dessert made from sesame seed paste that’s mixed with honey and pistachios, and it’s pretty good.

This simple act of bringing the band together to share a snack, though fairly insignificant, seems emblematic of Haddad’s approach to music with his band, Under One Sun. As diverse as its name implies, the group includes musicians representing five countries and five generations, creating a unique sound that combines Middle Eastern, Indian and Venezuelan influences with compositions by saxophonist Billy Drewes and pianist Leo Blanco.

Drawing members of the band in to share halva is not the only way Haddad has brought the group together. “Billy [Drewes] and I have been always kicking around the idea of having a band like this,” Haddad said, and despite a few bumps along the way, they remained optimistic that “given the right characters [the band] would really work.”

When it came to assembling the group, Haddad turned to previous musical encounters. “It’s through Jamey,” said bassist Roberto Occhipinti. “I played with Leo [Blanco] through Jamey. We played a quartet with Billy [Drewes] through Jamey.”

With this group — Haddad, Drewes, Blanco, Occhipinti, accordionist Michael Ward-Bergman, tabla player Salar Nader, qanoun player and vocalist Ali Paris and percussionist Luisito Quintero — the band seems to have hit its stride. After three consecutive nights at Bop Stop, an upscale Cleveland venue that showcases jazz concerts, the group was recording an album in the Conservatory’s recording studio, Clonick Hall, right up until just a few hours before their performance at the Cat in the Cream Wednesday. As far as the group’s reception at Bop Stop, “it couldn’t be better,” Blanco said. “Everybody really came in the right spirit,” agreed Haddad.

It’s not hard to see why: the show at the Cat in the Cream was excellent (aside from some minor technical issues stemming from lack of a sound check), and, even this early on, is a major contend-r for one of the year’s best shows of its kind at Oberlin. The band is absolutely brimming with top-class musicianship, showcased by the blistering solos of Ward-Bergman, Drewes, Quintero and Nader, whose tabla playing on one song left several audience members’ mouths hanging visibly open. Drewes’ and Blanco’s compositions not only provided a framework within which the band’s soloists could showcase their skills but stood alone as harmonically, rhythmically and melodically motivating. Finally, though better known for his work with Paul Simon and other world-touring acts as a hand percussionist, Haddad amazed the audience with his formidable prowess behind a drum kit.

Along with individual talent, the performers also showed great cohesion, especially for a group of working musicians based all over the world. It’s a tightness that stems from the group’s inclusivity and supportiveness, according to Nader. “You know everybody here … is a team player. … Everybody’s welcome with open arms and you don’t get that in every musical situation,” he said. It’s a feeling that also resonated with other members of the band, and for Haddad, their tightness and camaraderie are linked.

“I learn more about what everybody here is doing because I’m a fan of their sound and what they do, so that in itself makes the recording process [and] the playing process a self-editing thing, because people actually understand where other people are coming from and so musically they make a lot of the right choices, and when you have [as] little … time as we do, those aspects of the recording process make or break the deal, because if you’re sitting around telling people what you do want and what you don’t want and not letting their natural instincts take over, it’s dead.”

The band’s mutual understanding was evident throughout the set, from Nader and Paris trading licks on tabla and qanoun to the last song’s punchy ending. Each member got the chance to solo at least once throughout the night and each was masterful in taking a backseat when the spotlight was on another member of the band, perhaps best exemplified by Paris’ understated-yet-beautiful vocal melodies that blended with Drewes’ saxophone in several songs.

The fun the band is having and the support they’ve received aren’t lost on Haddad: he’s got big plans for the group. In addition to the band’s shows at Bop Stop and the new record, audio and video from their performance at the Cat in the Cream was also recorded. In the middle of our interview, Haddad jumped in to ask the other members of the band if they would want to do another three night stand in town between Christmas and New Years. “Think about it,” he said. Beyond more shows, Haddad also has his sights on another record with the group. “Going forward we’re looking forward to maybe doing an orchestral project,” he said.

If their show at the Cat in the Cream was any indication, both that and the album they recorded this week will be fantastic. After their show, the band’s vision and ambition are totally infectious: “It’s a time for music to really speak up for … globalization,” Blanco said. Indeed, it seems no band could better show the promise of blending regional musical traditions than this one, representing so many countries, generations and musical styles, with Haddad at the helm. “Maybe we can catch lightning in a bottle and it can take off,” he said.

After their show Wednesday, it seemed they might have caught that lightning. When speaking with a professor about the show the following day, neither of us could help commenting on what a magical night it was — magic that the band was keenly aware of. “Music is the unseen world,” Haddad said. Occhipinti added, “When you have that transcendental moment … you’ve gone into the unseen, you’ve gone into the unknown, and you’ve gone past yourself … to really connect to being part of human[ity].” The band invited its audience to join them in their unseen world Wednesday not just by experiencing the music, but also by participating: Jamey led the audience in clapping a clave rhythm during one song.

Invitations like this seem to pop up constantly in musical interactions with Haddad, whether he’s inviting world-renowned musicians to join him in a new project, the audience to clap along or future audiences to experience his band’s new record. Just like a bite of halva, those are invitations we’d be foolish to turn down.