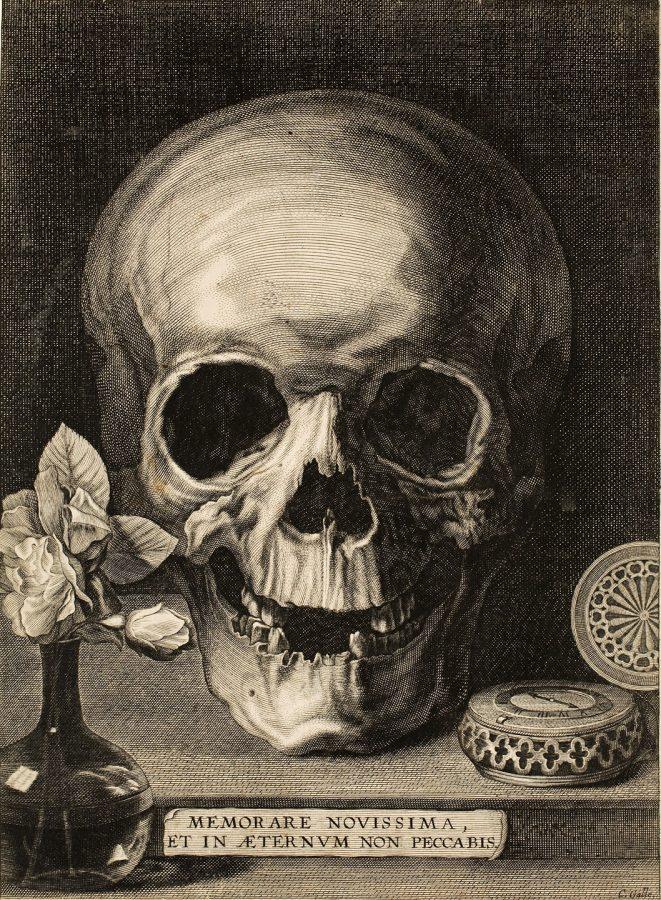 Courtesy of the AMAM

Still Life with Skull, Pocket Watch, and Roses by Matthieu Platte-Montagne is one of various works on display in the Allen Memorial Art Museum’s Ripin Print Gallery. The piece is part of the Time Well Spent exhibit, organized by Curator of European and American Art Andaleeb Banta and Juliet Vincente,  OC ’16, curatorial assistant.

While Oberlin students spent this week finding time in their schedules for classes, the Allen Memorial Art Museum was also tackling the idea of time. The museum has organized an exhibit called Time Well Spent, which opened in the Ripin Print Gallery in late July. The exhibit showcases pieces, mostly drawn from the Allen’s own collection, that represent aspects of time ranging from the cycles of the seasons and times of day to memory, mortality and the role of time in creating art.

Andaleeb Banta, who curated Time Well Spent, spoke about her inspiration for the exhibition’s title.

“I thought that it … argued for the time that I would like to think a visitor would want to invest … in experiencing the exhibition and the work itself. It also plays on the idea that artists throughout the centuries have invested their lives in creating art [ for the benefit] of people they will never meet. It addresses the fact that their creative process is worthy, and creating art is a worthy pursuit.”

Banta, AMAM curator of European and American Art, was especially excited about one particular pairing of artworks close to the gallery entrance.

“The first [of the pair] is a 17th century … print made by Platte-Montagne,” she said. “It’s a print of what we would refer to as a memento mori still life. It has the very traditional, typical components— a skull, flowers, a pocket watch. All of those refer to time passing, mortality, ephemerality.”

Displayed beside this piece, she said, is a photograph by Jim Riswold of another skull. In response to another artist who profited greatly off a gem-encrusted skull, he covered his with candy.

“It’s this wonderful, saccharine, lighthearted but also conscious quotation of the tradition of the memento mori and the artist’s role in society as a commodity,” she said.

Banta also reflected on the extraordinary range of art that this exhibit has drawn together, including work by such well-known artists as Andy Warhol, Albrecht Durer and Kathe Kollwitz.

“It’s so expansive,” she said of the show, which “covers art from antiquity all the way up to contemporary. It seems kind of silly to me to impose artificial temporal parameters on a show about time.”

Most of the works displayed in the exhibition are drawings, etchings or prints. However, a few of them are historical artifacts that might seem out of place in an art museum. On display in one section of the exhibit is a copy of Newton’s Principia Mathematica and a pamphlet by Einstein, both from the Oberlin College library’s special collections.

“Those are both significant historical figures,” Banta said, referring to the scientists. “They are very much related to our history of time, our use of time as a tool to further explore the universe around us. And so I thought, ‘why can’t they be part of the exhibition?’ Whether they intended it or not, their legacy and the information that they have injected into our culture is now part of our creative identity as a civilization. … I also wanted to show how there is crossover between the humanities and the sciences. There’s no reason they have to be thought of as separate.”

Banta and Curatorial Assistant Juliet Vincente, OC ’16, worked hard to ensure that every piece was part of the larger narrative they wanted to tell.

“One of the questions we kept asking ourselves is, ‘Does [this object] underscore the theme of time, and how so?’” Banta said. “‘What aspect of time does it illustrate?’ There are many different aspects and facets in the exhibition, and I was trying to show the various ways that time has been constructed and perceived and conceived.”

Banta hopes that museumgoers don’t just view the exhibit through a somber lens.

“I find it fun,” she said. “I hope other people find it fun. I hope they find something to connect to. There are actually quite humorous works. I hope people come with an ability to see that not everything demands a historical seriousness about it. … I think there’s a lot of humor and mirth in some of the objects.”

Banta also painted Time Well Spent as part of an effort to give the museum an enhanced sense of kinesis.

“I hope that someone out there who might write off a museum as being boring or stodgy or irrelevant might come in and find something to connect with,” she said. “Museums [can be] places where art is kept in a state of… suspended animation. I think a lot of people here tend to think about museums that way, and I’m hoping that the programs that we develop here show that that’s not the case. Museums are changing, vibrant places.”

Time Well Spent will remain in the Ripin Print Gallery at the Allen until Dec. 23, 2016.