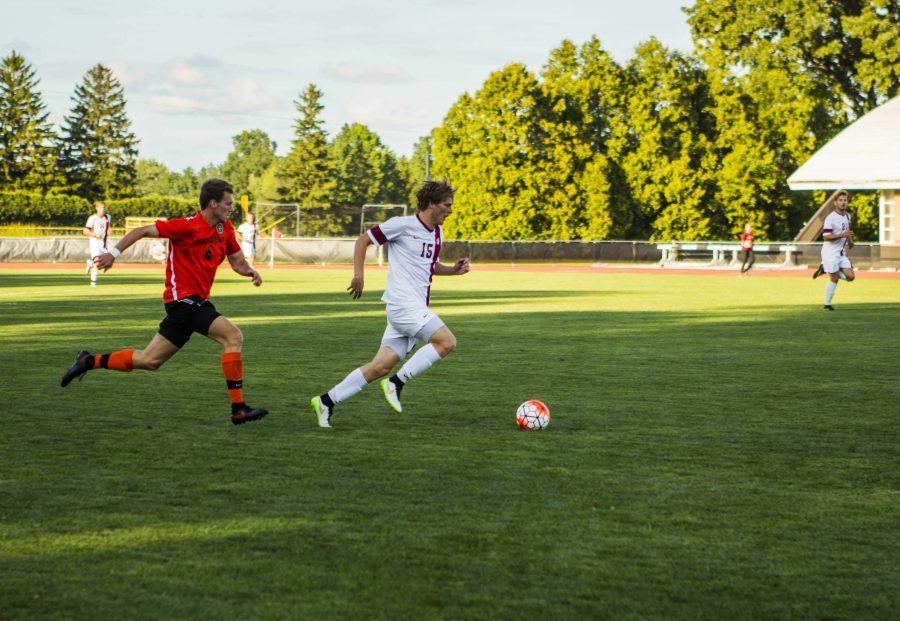 Men’s soccer split its season openers against the Heidelberg University Student Princes and the Ohio Northern University Polar Bears last week. The Yeomen pulled away with 3–1 victory against the Princes last Saturday at home, but fell short on the road just two days later with a 4–0 loss to the Polar Bears.

In Saturday’s contest against Heidelberg, the Yeomen’s early momentum set the Student Princes back for most of the game.

“After a rough patch in the very beginning, we got in a groove and started playing some really great soccer,” said junior forward Timothy Williams, who totaled one shot-on-goal and one assist.

Only three minutes had passed in the first half of the match when junior midfielder Jonah Blume-Kemkes sent the ball to the back of the goal on a pass from senior forward Sam Weiss.

“We came out strong and were able to net pretty early,” said Weiss, whose coaches identified him as a stand-out player in games last week. Just three minutes after the first tally, Weiss secured a two-goal lead over Heidelberg with a sneaky curve from the endline.

“Once it was 2–0, we were really moving the ball well,” Weiss added. “It definitely set the tone for the rest of the match.”

New seconded Weiss’ testimony that scoring early set the Yeomen up to sustain momentum for the rest of the match.

With the scoreboard at 2–0 in Oberlin’s favor, the numbers remained stagnant until the 23rd minute of play, when swift passes from Williams and junior defender Matthew Bach-Lombardo allowed senior Adam Chazin-Gray to notch a third goal for the Yeomen.

“We scored three goals in fifteen minutes and we were just balling!” Williams said enthusiastically, adding that the squad plans to “get better at playing that way for the whole 90 minutes, but it was promising stuff for sure.”

Heidelberg attempted to bounce back in the 53rd minute of the game, when opponents Rodrigo Meza and Kyle Diaz worked together to put one past sophomore goalkeeper Koryn Kraemer. However, their first mark on the board would also be their last. The Student Princes were hoping for a comeback when, just minutes later, they came close to a second goal that would have shortened the Yeomen lead to a one-goal margin. Before they could get their hopes too high, Kraemer performed a masterful double-block after the Heidelberg offense invaded the goalie box in what would prove to be their last big push of the day.

Still, 20 minutes of playing time remained in the second half. A setback from the Oberlin defense gifted Heidelberg’s Andres Isea with a penalty kick but to no avail. Kraemer was ready for the challenge as he tipped the shot over the cross-bar. Finally, the match came to a close with the Yeomen dominating over the Princes by a 12–11 shot advantage. The final score was 3–1 Oberlin, and Heidelberg was sent home with its first loss of 2016.

The Ohio Northern game, however, was not exactly smooth sailing for the Yeomen.

Though Williams thought they “were doing all right for most of the first half,” the Yeomen defense couldn’t stave off the hungry Polar Bears’ offense when David Janusz jumped on a rebound in the 26th minute of the game.

“They were fortunate to get their first goal,” Williams said. “Once they scored again, our level dropped a bit and they were able to put a couple more past us.”

First-year midfielders Jack McMillin and Jake Crim both saw considerable action, firing two shots each, along with Williams, classmate Jesse Lauritsen and sophomore Brian James. Though they fought hard, statistically outnumbering their opponent with 9–8 shots and 5–4 corner kicks, none of Oberlin’s attempts were able to hit net.

“I really liked how we rallied at halftime despite being down 3–0,” Williams said of the team’s energy and resolve. “It showed a lot about our growth as a team and our mentality.”

Despite Oberlin’s efforts, the small details dictated the turnout, and the Polar Bears delivered a 4–0 shutout to the Yeomen. Oberlin was simply unable to rival the sweeping power of the 2015 Ohio Athletic Conference Champion Polar Bears, and left Ada, OH with a 1–1 record for the 2016 season thus far.

The Yeomen will head to PA for a double-header this weekend, playing will Geneva College today at 7 p.m. and Waynesburg University tomorrow at 7 p.m. The team will have to adjust for turf fields, but New said that the team expects to come back with two wins.