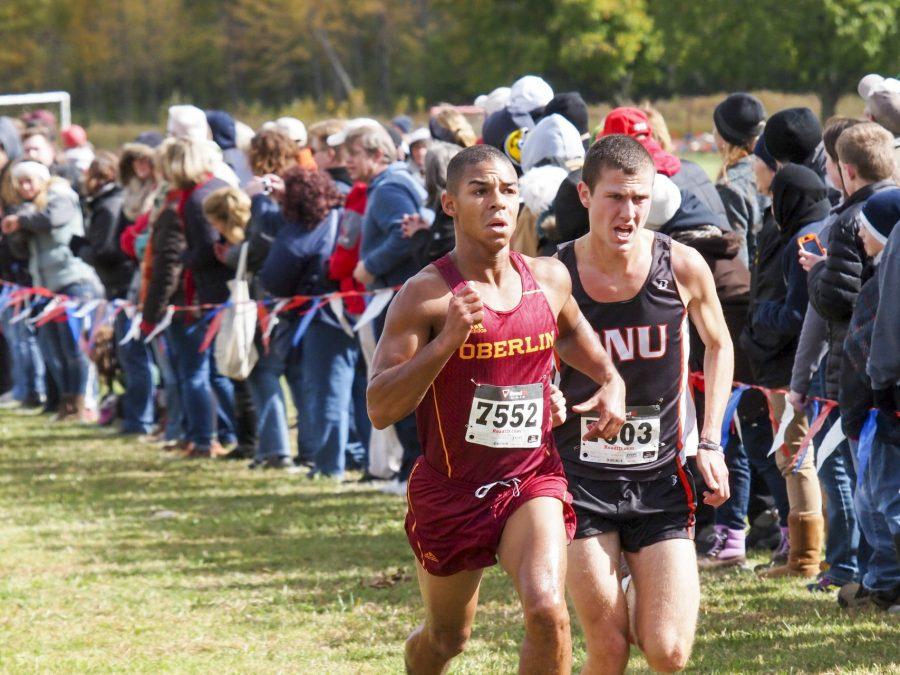 Senior E.J. Douglass glides past an opponent from Ohio Northern University at the Wooster Invitational Sept. 1. Douglass tied for first in the four mile with sophomore Grant Sheely. Both finished in 21:42.1.

The men’s and women’s cross country teams returned home laden with medals after outstanding showings at the Wooster Invitational in Wooster, Ohio, last Thursday. The invitational, a non-scoring annual meet, featured runners from The College of Wooster, Oberlin and Baldwin Wallace University.

While this is a contest that Oberlin regularly dominates, Head Coach Ray Appenheimer said he believes this year’s success was the “best team performance” at Wooster he had seen in years, referencing both the winning finishes and the team’s communication and cohesion.

“Their positive mentalities and team encouragement allowed them to really dominate the race this time,” Appenheimer said.

Appenheimer and Assistant Coach Izzy Alexander prioritize teamwork and facilitate a team environment that, according to sophomore Zane Markosian, “underlines encouraging each other, pulling each other along, and staying strong together, in both practices and games.”

That mentality served Oberlin well at the Wooster meet, with the Yeowomen finishing the 5 kilometer sweeping the top nine spots and the Yeomen finishing the 4 mile with nine runners placing in the top 10. Highlights of the evening included a first-year sweep, with the top three spots in the 5k going to first-years Shannon Wargo at 19 minutes and 50 seconds, Marija Crook at 19:54.7 and Oona Jung-Beeman at 19:59.3. Also landing in the top nine was senior captain Emily Curley and sophomore trio Madeleine Weiland, Abigail Bellows and Rosie Kerwin.

“The way we performed at Wooster really set the tone for this season,” Weiland said.

The Yeomen had an equally thrilling evening on the Wooster course, finding success in powerful pairs. The men’s 4 mile concluded in a dead tie at 21:42.1 between senior E.J. Douglass and sophomore Grant Sheely. Seniors Nick Care and Ben Stassen, teammates for the fourth season in a row, finished the race at 22:35.7 and 22:38.2, respectively. The men’s team also saw successful performances from first-years Julian Guerrieri and Jackson Daugherty, joined upperclassmen in the top 10.

The rookie success at Wooster made the team’s dominant performance even sweeter for Appenheimer.

“It was really exciting for us to see so many new people handle their first collegiate race so well, as well as the top returners from last year,” said Appenheimer.

The cross country teams will seek to maintain their success at the Bethany Bison Invitational on Sept. 10. Hosted at Bethany College in Bethany, WV, the invite hosts runners from 19 colleges and universities, including 10 NCAA Division II schools.

Appenheimer expects the competition to be fierce but said he believes “if the mentality is there, both teams will be really close to the top.”

As they trek through their season, Appenheimer said his teams will continue to bond over something more profound than each individual runner.

“Kids come to Oberlin because they want to be a part of a community,” Appenheimer said. “These kids want to give to each other, want the best for each other, and they are going to support each other wholeheartedly.”