In the Locker Room with Michael Leshchyshyn and Zach Taylor 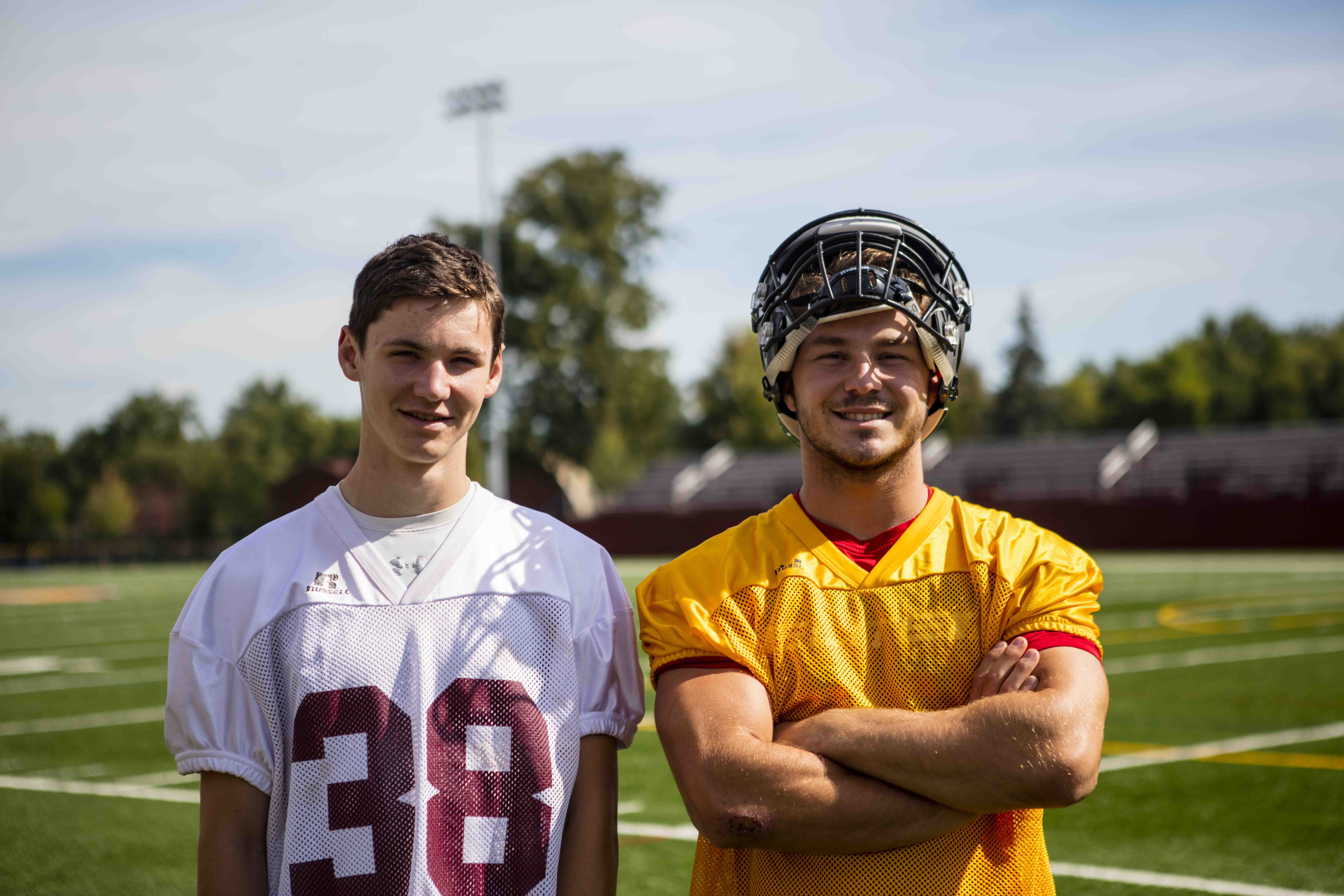 This week, the Review sat down with first-year quarterback Zach Taylor and first-year kicker Michael Leshchyshyn to discuss their transitions from high school to college football, their excitement for their first home game and what it means to be a part of Yeomen football.

Q: What has been the toughest part about the transition from high school to college football?

Zach Taylor: The toughest part is probably playing against a bigger range of athletes. There are a lot of adults, guys ranging from 18–21 years old, and they hit a little harder than high school players. [In college], you have to stay on top of yourself and you have to make sure you’re at practice on time. That’s one thing you just have to just roll with as a college athlete.

Michael Leshchyshyn: One transition thing I’ve noticed is that the speed of the game is a lot faster. And especially on special teams— kicking wise the time from the snap to the hold to the kick needs to be crisp or it’ll get blocked. Like Zach said, you just have to stay on top of yourself. You have to get your stuff done, so there is a lot of responsibility like relying on yourself.

Q: Why did you choose to play football at Oberlin?

ZT: It’s a great academic institution, first of all. [Head] Coach [Jay] Anderson seems to be taking the program into the right place. I could tell here that they are very serious about football and that’s something I like.

ML: Oberlin is a very academic school, so coming to a school like this is a great opportunity for anyone. Coach Anderson was the main coach who recruited me here, and he was just really straightforward throughout the entire process. Ryan Gleeson, on the team, he went to my high school and he’s a sophomore here now, and he talked to me about this school and opened up my interest to it.

Q: Is there a player that you model your game after?

ZT: I really like DeShaun Watson from Clemson. He’s recently grown on me. He’s number four as well so that’s pretty cool. I just like his ability to make plays no matter the circumstance.

ML: My favorite kicker in the NFL right now is Justin Tucker. I just like how he hits the ball. He is really smooth with his steps and he can get a lot of power out of it.

Q: What are your personal goals and team goals?

ZT: Personally, I just want to lead this program to a winning season that we haven’t had in a while. I have four years to do it, but I’m not going to take my time. I’m going to try to win as many games as possible, as soon as possible. But at the same time, we just have to take each game one week at a time.

ML: A goal of mine is to perfect everything I do on special teams to help the team as much as possible. Getting stronger for kickoffs so I can get more touchbacks or staying more consistent on field goals and extra points … will lead to the team, hopefully, winning some games and having a winning season.

Q: What does it mean to you to be a part of Yeomen football?

ZT: It means a lot. I could tell that Coach Anderson really wanted me. He was persistent in the recruiting. It means a lot to be somewhere where you’re valued as a person rather than just another number on the roster that a coach can just replace.

ML: It’s a great opportunity. A lot of people don’t get to play college football. To have the opportunity to play football and get the education that you want for a better future is a great experience.

Q: What has been your favorite experience on the team thus far?

ZT: The Kalamazoo game was really fun. Granted, we lost, but it was fun. Seeing the team unite after halftime really showed what kind of guys that we have on our team. We are guys that won’t quit no matter the score.

ML: I like it when the team comes together, especially after a big play. I notice the big hits on defense. I know Von [Wooding] has gotten a couple of them, and the whole team just gets super hyped up.

Q: This week the Yeomen will host Denison University Saturday at 6 p.m. How excited are you to play your first home game?

ZT: I’m pretty excited. I know we have a great fan base, a lot of support here. I can’t wait to see how it’s going to be and play football in front of my school.

ML: I’m really excited too. It’s just going to be a new experience. I feel it’ll be like the same kind of feeling in the Kalamazoo game where we were hyped up and excited for a new experience.

Q: Being first-years and having such important roles on the team, how do you keep yourselves composed in pressure situations at this level?

ZT: I try not to worry. I just try to go out and have fun every game. That’s what it’s supposed to be. Football is always fun. But you can’t lose track of the objective, which is to win.

ML: I just trust my steps and try not to overthink what I’m doing because we have been practicing it for a while now. If we just trust our instincts and go with our gut then it’ll work out.