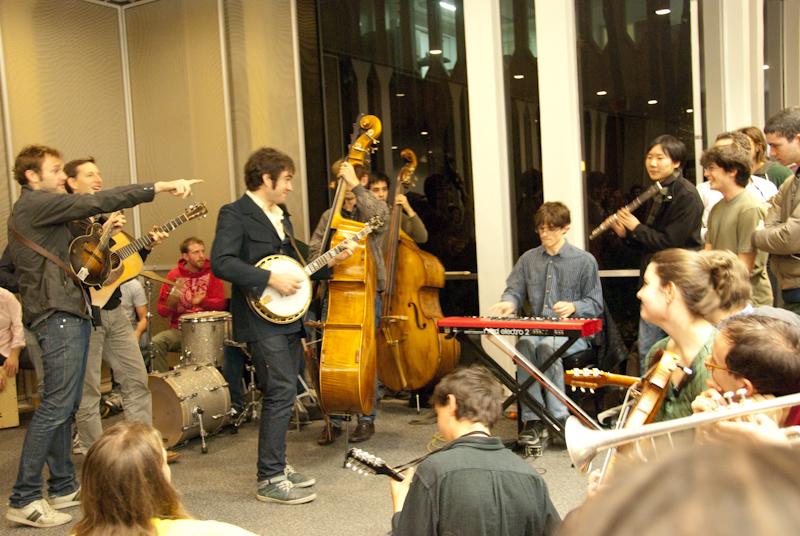 Singer and mandolinist Chris Thile jams out on the mandolin as students join in. Punch Brothers held an informal jam session in the Conservatory lounge Tuesday evening, covering classics by The Band and Randy Newman, as well as folk and bluegrass standards.

Punch Brothers are a unique ensemble, one perfectly situated to be Oberlin’s first artists-in-residence under the American Roots Residency Fund, established by comedian Ed Helms, OC ’96. In addition to being a bluegrass band that has covered Radiohead, and was featured on The Hunger Games soundtrack, they write involved compositions within a rootsy vein, and are fans of classical music. According to Acting Dean of the Conservatory Andrea Kalyn, who introduced the band before a Q & A session, they “reflect everything we want to instill in [students].”

From Dec. 2-4, Punch Brothers lurked the halls of the Conservatory dressed in their customarily folksy garb of thick wools, plaids, patterned socks, jeans and tousled hair, their speech peppered with “y’all’s.” They began their residency with a master class on Monday in the David H. Stull Recital Hall, coaching Mozart’s String Quartet in G minor, K. 387.

What does a bluegrass band have to say to a string quartet? The band actually has a significant background in classical music: Guitarist Chris Eldridge, OC ’04, graduated from the Conservatory, singer and mandolin player Chris Thile has recorded an album of Bach works, bassist Paul Kowert attended the prestigious Curtis Institute of Music, and the group’s pieces are often as complexly structured as classical music.

In their master class, they emphasized ensemble communication and connecting to an audience. The class was followed by a presentation on “Developing and Executing Artistic Vision” and an informal Q&A session. The day ended with the members of the band coaching student Performance and Improvisation ensembles.

The band-members’ thoughtful minds were on display during Tuesday’s Q&A session as they offered advice to young musicians while managing to reference reclusive pianist Glenn Gould, twelve-tone composer Milton Babbitt and indie band Grizzly Bear. Banjoist Noam Pikelny cautioned that “you can’t make a career doing just one thing anymore,” while Thile suggested that musicians “fanatically adhere to the construction of [their] vision, what [they] would like to be.” The band also discussed their origins (“The idea was to fall down the rabbit hole of fiddle tunes”), their philosophies on music (“The really important music that gets made is genreless”) and the importance of live performance.

After more coachings, the band led an open jam session in the Conservatory lounge Tuesday night. While people spilled into adjoining hallways, craning to see over the heads of others, Thile called out songs and key changes, allowing anyone with an instrument to join in. And there were a lot of instruments: accordion, bass, violin, keyboard, trombone, trumpet, guitar, percussion, flute, slide whistle and even harp. The good-natured, welcoming Punch Brothers seemed to relish creating music with so many people, as Thile pointed at students to take solos and lead sing-alongs. A more genuine, warm-hearted experience couldn’t have been asked for.

The band treated observers to a glimpse of their creative process on Wednesday in a “Collaborative Composition Workshop,” again in Stull Hall. They explained that, when composing as a group, one member brings in an unfinished, open-ended idea that is then developed as a group. Demonstrating this with a simple riff, the band played it a few times while improvising around it. Soon they began offering suggestions of places to go with the lick, then trying them out. “We throw spaghetti at the wall and see what sticks,” Thile said. Interrupting their noodling periodically to explicate their thought process, they referenced Haydn, Jimi Hendrix and R&B, while attempting to capture what they look for in a composition.

Their playing was interspersed with bursts of childish excitement, a great illustration of the band’s delight in music. Metaphors comparing the composition process to a riddle, a hypothesis, logic and philosophy were thrown around, but in the end they admitted, “We don’t know what works.” Yet watching them take student feedback, trot out ideas and explore the possibilities of their lick certainly gave the impression that they more than know what they’re doing.

Later on was “Improv Boot Camp,” where students could bring an instrument and learn to improvise. The residency ended with a reception in the Conservatory lounge, where Punch Brothers displayed their laid-back friendliness as they conversed with students.

Thus far, Punch Brothers residency has been a fantastic tool and experience for young musicians — where else but Oberlin could one observe a phenomenally talented band’s creative process, receive advice from them, absorb their fascinating thoughts on music and jam with them?

The Brothers return in March for a continuation of their residency and a performance in Finney Chapel. Don’t miss it.