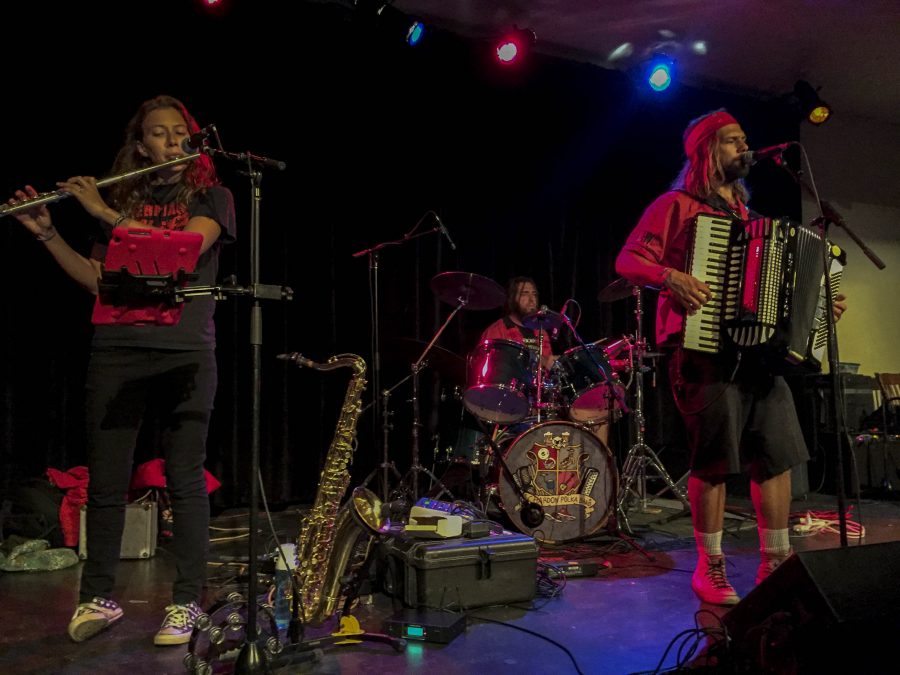 The Chardon Polka Band performed at the Cat Wednesday, showcasing a variety of poppy tunes with energetic whimsy.

Chardon Polka Band hit the stage at the Cat in the Cream Wednesday with all the blustery spirit of a blaring megaphone. The motley crew of musicians, miscellaneous instruments and multitude of styles created an atmosphere of playful spontaneity that permeated each moment of this group’s unorthodox interpretation of polka music. At the start of the set, audience members might have seen nothing more than a perverse misunderstanding of a cultural hallmark, but by the closing chords it became abundantly clear that this creative strain of polka vibrantly displays the genre’s core theme of celebration in food, drink and the pure joy of music.

The Chardon Polka Band’s style comes with a couple of peculiarities. First, the group doesn’t care. This manifests itself everywhere from the members’ tendency to down a few beers before walking on stage to synchronized dancing mid-song and even repeatedly advertising the venue’s dollar menu of their own free will. Some parts even included a megaphone. Secondly, they insist that polka is at the heart of what college students want, since their interpretation of it centers around food, beer, the celebration of not doing anything and more beer. According to the band, the whole show is framed around these four tenets and how they relate to family life, work life and personal life.

The set began with “Tic-Toc Polka.” At first the group was peaceful, but soon it exploded into bombastic glee. Simple chords accented by a banjo and accordion duo laid the foundation for frivolous lyrics about dancing and merriment. Genial harmonies and upbeat rhythms maintained a pleasant atmosphere before the words “We’re not gonna take it” rammed the piece into a polka-infused cover of Twisted Sister’s popular song. This spontaneous infusion of popular music is one of the band’s hallmarks. Throughout the night, the works of Bob Marley, Chopin, Van Morrison and John Coltrane all appeared in unpredictable fashion.

The body of the show was mostly composed of similar pieces that did little to differentiate themselves apart from the band’s synergy and knack for the seemingly random. The players themselves are not especially technical; their harmonic progression rarely deviates from conventional popular song structure and their lyrics rarely climb above the standard fare of love and everyday life. In most circumstances, such a group would lack interest or charm, but the Chardon Polka Band doesn’t care. The band’s carefree nature creates a sense of impenetrable confidence and bliss that infects one with the kind of smile reserved for guilty pleasures.

The cover of “Mountain Climber Polka” exemplified this confidence, where the band’s banjoist gave his best Frank Ifield impression and yodeled like few banjoists have dared yodel before. Following this, “Who Stole the Kishka” provided a novel fairy-tale of the robbery of a butcher’s shop, complete with man-made wind noises, animal squeals and melodramatic villager reactions to various events.

Even more impressive than these exceptions was the group’s closing number, “Old Style Beer.” Beginning with nostalgic lyrics and a serviceable melody, the piece set expectations low before the group’s banjo player transitioned to an electric guitar and a whistle. Heartfelt anecdotes interspersed throughout each verse gave context to each member’s history with music and their inspirations. Thus blues, old-style country and ’70s rock & roll all made appearances before the now-fabled megaphone was brought out. They then introduced a verse about hardship and struggle before turning to comforting themes of friendship, camaraderie and a love of music. The band insists that “ya don’t need riches to lead a full life,” and in its whimsical world, love, beer and polka are all you need. The moderate success the band has seen in their 12 years together makes this idea all the more salient — if this group of merry polka aficionados can find peace and satisfaction in life without fame, fortune, a college diploma or virtuosic talent rivaling the greats, why can’t we all?

In some ways, the band’s very survival is more beautiful than its music, and its carefree attitude is a rare find in today’s world. What they lack in technical skill, the Chardon Polka Band more than compensates for with optimism, sincerity, a yodeling banjoist and a glorious synergy that cracked one pleased smile after another.