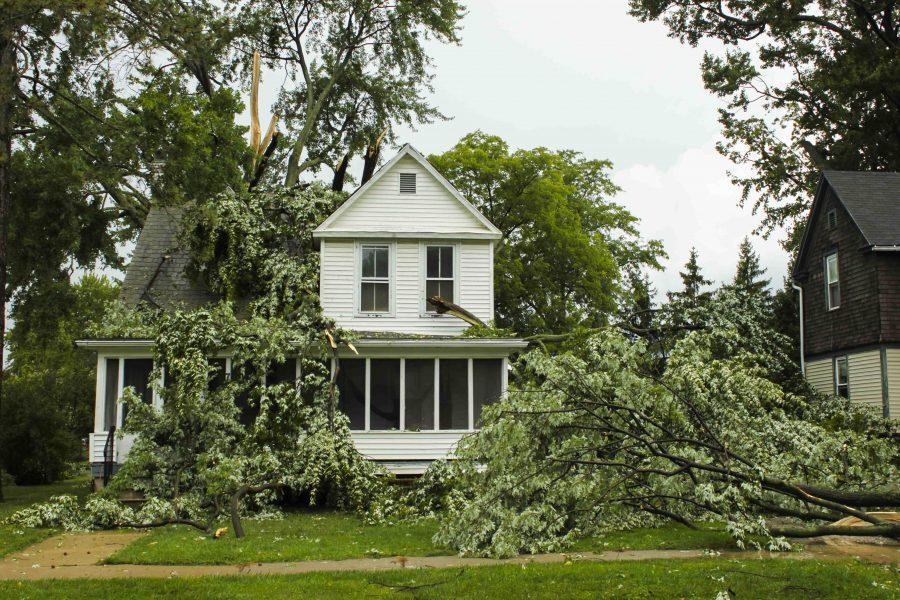 More than 3,000 Oberlin residents lost power Saturday afternoon as a result of a microburst — a particularly severe storm characterized by winds up to 100 mph. Microbursts are similar to tornados, but differ in the winds and rain that push downward, collapsing trees rather than uprooting them up like a tornado would.

Following the storm, the city dis- patched the Oberlin Fire Department and workers for Oberlin Municipal Light and Power System to clear the roads of fallen trees and repair the downed power lines that caused the power outage. Interim City Manager Sal Talarico said that his main concern was making sure workers were safe when dealing with fallen power lines.

“The areas chosen for restoring service were prioritized by the ability to safely access the lines and overhead service,” Talarico wrote in an email to the Review. “Our main priority was to make sure line-workers could operate safely. I am happy to report there were no injuries from the storm or subsequent cleanup and power restoration.”

While some areas had power re- stored shortly after the storm ended on Saturday, most remained without electricity until late Sunday night.

The Oberlin Fire Department spent most of its time responding to fallen trees, some of which were ripped from the ground and blocked roads. According to Assistant Fire Chief Susan Hiesser, while falling branches caused minor damage to a number of houses, she did not hear of any cases with serious damage.

Jeff Baumann, director of Public Works for the city of Oberlin, said numerous power lines in the city had been brought down by the storm, which had winds from 70 to 80 mph — almost hurricane strength. The most-affected areas in town were Westwood Cemetery and the Oberlin Golf Club, where winds reached up to 82 mph.

Throughout the week, the city of Oberlin has kept a notice on its web- site that reads, “All power has been re- stored to the community — If you are still experiencing an outage, please contact OMLPS. … The City will be picking up brush throughout the week due to storm damage.”

Unlike major cities that have utility workers and vehicles that can be deployed, OMLPS director Steve Du- pee said Oberlin’s smaller community-owned electric department takes longer to mobilize. Because of that, receiving help from nearby communities played a big role in getting power back in a reasonable amount of time. According to the Oberlin News-Tribune, nine utility workers from Bowling Green, Orrville and Wellington assisted in restoring power. Talarico made sure to thank the outside help in his email.

“To Wellington, Bowling Green and Orrville, I want to express once again my gratitude for your help,” he wrote.

According to Baumann, the towns are inclined to help each other in such an event due to a mutual aid agreement they share. According to Hiesser, Wellington sent at least two electrical crews to help with the cleanup. Along with the other towns, the Amherst-based tree cleanup company EcoTree helped in removing fallen trees due to a contract they have with OMLPS.