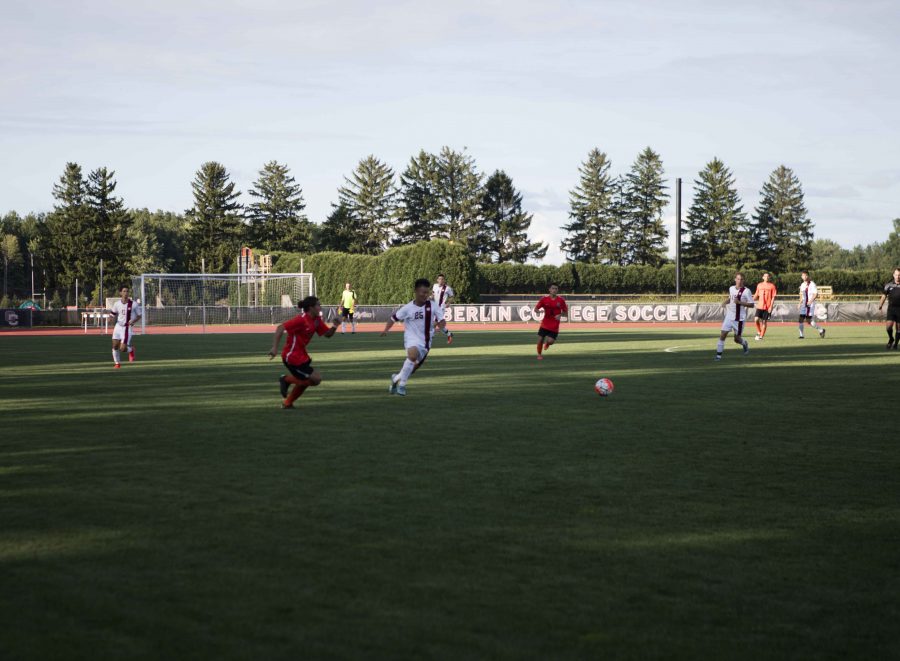 Midfielder Jiadi Cheng dribbles past a Heidelberg defender. The Yeomen are riding a five-game win streak entering the conference opener against DePauw University Saturday at noon.

The Yeomen propelled themselves to a five-game win streak with dominant defense and an aggressive offense after going 1–1 in their opening matches. The team’s most recent victories show the Yeomen are finding their stride as they prepare for their first North Coast Athletic Conference Game Saturday.

The Yeomen defeated the Grove City College Wolverines for their fourth win of the season on Sept. 14. Grove City’s Stephen Betteridge claimed the first goal on a breakaway just 17 minutes into the game, but Oberlin rebounded when senior forward Sam Weiss struck back 15 minutes later. Weiss dribbled solo into the offensive third, hooking a low shot that the goalkeeper deflected into the net.

Weiss again struck 15 minutes later, slotting a ball to the top corner off an assist from sophomore midfielder Trenton Bulucea for his third goal of the season. An Oberlin native, Weiss is currently tied for the team lead in goals and points.

“We’ve been scoring some great goals this year,” junior midfielder Jonah Blume-Kemkes said. “Sam had a screamer against Grove City, and Gideon [Tamir] had an [impressive] diving header against Geneva [College]. We’re attacking creatively and with composure and we trust each other in the attacking third.”

Less than four minutes after Bulucea’s first assist, he executed another great feed, sending senior midfielder and captain Nick Wertman through for his first goal of the season and 16th career goal, boosting the Oberlin lead to 3–1.

“It felt really good to get on the score sheet, especially as a result of such good play from the team,” Wertman said. “We’ve been playing really good soccer and it’s only been getting better as the season has gone on, so we have really great potential going forward.”

With a comfortable two-goal advantage, the Yeomen continued fending off their opponent, blocking several solid goal attempts. The Wolverines were relentless though, and with 10 minutes left, attacker Dale Reese found the back of the net to reduce their deficit to 3–2.

Toward the end of the game, Grove City’s Betteridge and Blake Baer both had scoring chances, but Yeomen goalkeeper Koryn Kraemer had two crucial stops, bringing his total number of saves to three.

“The defense in front of [Kraemer] has been playing pretty well, but we know as we come up to these conference games that we’re going to rely on Koryn to come up with a couple big saves for us,” said Head Coach Blake New. “Last year, we went to [Grove City] and probably played the worst game we’ve played in the last five years. The guys were hungry for some retribution, so it was nice to get that win, for sure.”

The Yeomen returned to the Fred Shults Field Saturday to face off against the University of Mount Union Purple Raiders. The week ended on a high note as the team registered another win.

Although the competition was even during the first half, Oberlin had an offensive edge, outshooting Mount Union 6–1 on-goal. The Yeomen utilized the break at half-time to dominate the second half. While the Purple Raiders were held scoreless in the first half, junior forward Timothy Williams notched his second goal of the year just three minutes into the half off a dual assist from Blume-Kemkes and Bulucea.

“When we recruited Trenton [Bulucea], we knew it was going to take him a little time to get comfortable with the college game,” New said. “But in his sophomore year, he’s been really effective and pretty deadly with his final passes [leading] some really good goals.”

13 minutes after Williams’ goal, the Mount Union defense tripped up as junior defenseman Matthew Bach-Lombardo drilled a free kick, which Blume-Kemkes readily sent on its path to the net.

“I felt pretty great about my goal,” Blume-Kemkes said. “It was off a set piece that we had right outside the box. Matthew did all the hard work, though — he put it right on my foot. All I had to do was tap it in.”

While the team has had success on the offensive side of the ball, New said knows the team must progress defensively as NCAC matches begin.

“We need to make sure we’re sharp defensively and clean up as we prepare for conference,” New said.

After a 4–3 win over Baldwin Wallace University to improve their overall record to 6–1, the Yeomen are hoping to carry their momentum into the first NCAC game against DePauw University Saturday at noon.

“The spirits are high,” New said prior to the match. “[Baldwin Wallace] could be a bit of a trap, so we don’t want to be thinking past it into this weekend. We’ve got to make sure we don’t overlook this game, and then focus on Saturday.”