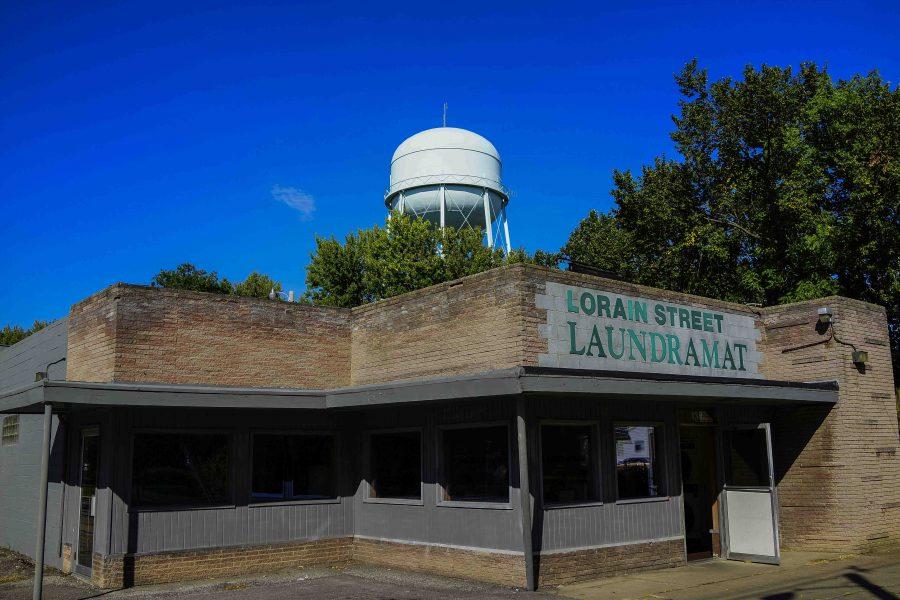 The water tower looms over the Laundramat on East Lorain Street. City Council voted to rezone both properties this week.

Thanks to a group of longtime city activists, Oberlin voters will decide the fate of O’Reilly Auto Parts’ Oberlin location next November.

The nationwide chain applied to rezone the parcel, located on Route 58 next to O’Reilly’s rivals, Advance Auto Parts, last spring. It received approval from the Planning Commission at that time and from City Council on Aug. 15.

But since Oberlin Citizens for Responsible Development submitted 405 signatures to the city government, well above the 259-signature threshold, the referendum attempting to reverse City Council’s approval is highly likely to occur.

Unless voters approve the rezoning next fall, construction on the parcel cannot take place. The news is a big relief for Mark Chesler, who led the signature campaign and owns the antique store Anchors Aweigh across the street.

“We got signatures from Kimberly Circle to Kendall, from Groveland to Reamer Place,” Chesler said.

Opposition to the rezoning partially arises from concerns that the increased traffic and additional driveway associated with O’Reilly, combined with the 50 mph speed limit, will lead to more accidents. Chesler referred to the intersection as “the accident capital of Oberlin.”

But according to Director of Planning and Development Carrie Handy, tales of O’Reilly’s traffic impact are simply not true.

“Certain people are saying that the traffic impact would be really great,” Handy said. “It’s not, and we’ve had engineers say that.”

Handy stated that the Ohio Department of Transportation reviewed it and found that there wasn’t enough traffic generated to do a traffic impact study.

“Peak traffic at O’Reilly is 10 people in an hour — that’s not a lot of traffic at all,” Handy said.

However, the estimate of 10 people an hour came from O’Reilly’s own assessment, based on findings at similar stores. Since the state never conducted a formal traffic study, the actual effects of O’Reilly remain unknown.

“The effects are cumulative,” said Planning Commission Vice Chair Peter Crowley, noting that the other side of the street, where further development may take place, is already commercially zoned. “The overall impact is not something the Department of Transportation really takes into account in their impact studies.”

The commission could have required a traffic study but opted not to, Crowley said.

Rezoning opponents such as Crowley, who voted against the recommendation to rezone last spring, say that city planners from the early 2000s did not want that side of the street to become a strip mall.

“We didn’t want any strip development; we wanted to have a very compact — or at least traffic-wise, a very organized — and organic sort of connection to Oberlin, so that we would grow as a community out to that commercial strip. It would not grow into us.”

The issue for Crowley is the slow abandonment of the city’s Comprehensive Plan, the long-term document that states how the city plans to use land, which zoned the area for office and institutional — not commercial — uses.

“We get enticed by the lure of development, especially commercial development that pays taxes,” Crowley said. “That’s our failure there. We need to keep aware of what decisions we made about development, and if we don’t agree with them we have to change the plan, but we can’t just ignore it. It’s basically the expression of what people have decided after a long planning process.”

Handy could not recall a single instance of the city rejecting a rezoning request in her three and a half years at Oberlin.

As old as the plan is, the city is only getting around to implementing parts of it now. The city council voted this week to rezone parts of East Lorain and Orchard Streets to comply with the plan.

According to Handy, before the current Comprehensive Plan, all commercial zoning in the city had a “C1” zoning designation, regardless of where in the city that commercial development was located.

The current Comprehensive Plan introduced “C2” and “C3” designations for commercial properties outside the downtown district, with the principle difference being the more “suburban” setback requirements — essentially, buildings have to be farther from the curb if they’re not located in the downtown district.

However, a number of locations — such as the laundromat and the water tower — had a “C1” designation, despite the fact that they’re not in the downtown district.

The council also voted to rezone a number of houses falsely zoned as commercial. Handy said that having homes zoned as commercial could have catastrophic consequences in the event of a disaster like a house fire, since city ordinances prohibit construction that contradicts the property’s zoning.

“All those people on Orchard Street, right now if their house burned down, they can’t rebuild,” Handy said. She also noted that banks and insurance companies often resist financing properties that don’t conform to the zoning.