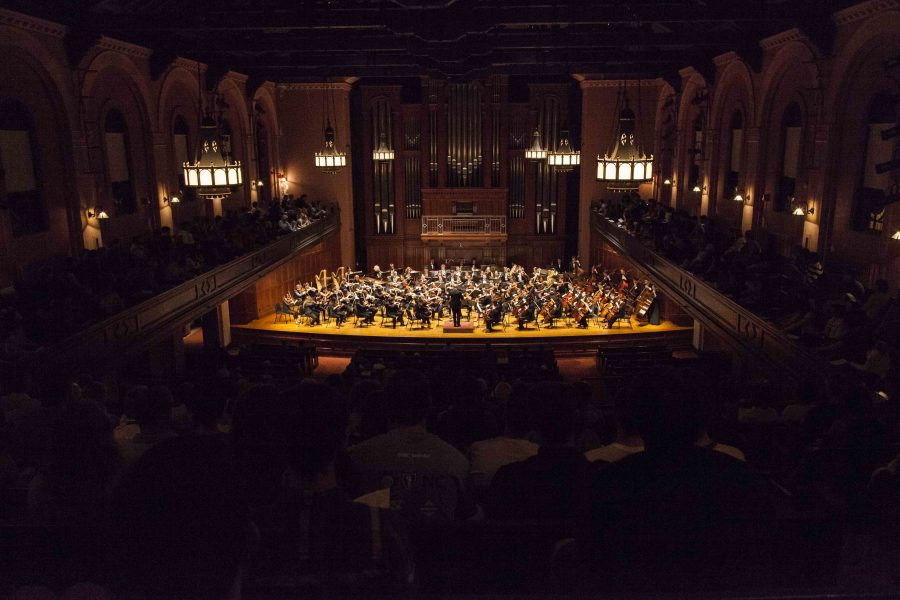 With conductor Raphael Jimenez at the helm, the Oberlin Orchestra performed the somber The Isle of the Dead, Op. 29 by Sergei Rachmaninoff and the complex Symphony No. 5 in D Minor, Op. 47 by Dmitri Shostakovich, bookending a tumultuous stretch of Russian history.

In its first performance of the year, the Oberlin Orchestra, conducted by Raphael Jiménez, returned to play at Finney Chapel Saturday night. Contrasting the feelings of composers who lived during two fraught periods in Russian history, the pieces selected for the performance complemented each other well. Though the tone of the second was underdeveloped, the concert remained engaging from its first note to the last.

The concert began with Sergei Rachmaninoff ’s Isle of the Dead, Op. 29, a piece based on Arnold Böcklin’s painting of the same name in which two figures on a wooden boat bear a coffin to a looming island. From the outset, an ominous precedent was established as a bass and harp emerged from silence. The unusual 5/8 tempo created two uneven groupings per bar, producing a wave-like soundscape as the instruments mounted and receded, drawing connections to the painting’s eerie waters. This structure continued as the remaining strings were introduced, the orchestra slowly building until muted brass seemed to reveal the island itself.

The piece was striking at first, and then evolved to more resonant melodies that fittingly gave the impression of spiritual departure in their ethereality. But as the flutes and violins bled into the dissonance of the cellos and horns, an impression of failure sunk in, as if Böcklin’s Isle of the Dead did not serve as a passage for the deceased but as a purgatory for the damned. On this note, the piece reached its first climax. The brass’ accompanying swells recalled the waves from the performance’s start, but this change to harsher instrumentation suggested approaching steps. The effect was unsettling, and as the orchestra moved to a crescendo, so too did the bleakness of the motifs at play. Horns growled, and the piccolo’s trills added to this sense of unease. A reprieve followed as the company returned to the bass and harp’s calmer waves, but dread lingered.

To the orchestra’s great credit, the nuances of the piece were finely developed, such that Rachmaninoff ’s frustration with the seeming futility of Russian progress at the time came across clearly. The piece concluded as ominously as one would expect when imagining the uncertain dangers looming over the composer’s world.

After an intermission, Jiménez and the orchestra led the audience to the heart of Joseph Stalin’s Great Terror with Shostakovich’s classic Symphony no. 5 in D Minor, Op. 47. Most of the performance, though, seemed as if it were quaking in the dictator’s shadow, fitting and disappointing in equal measure. Whether intentional or not, the first movement was a filtered experience that failed to fully capture the existential ideas buried deep within Shostakovich’s marvel. The rest of the initial movement was marred by odd imbalances. Woodwind solos were left exposed by quiet string accompaniments, and the brass was occasionally overshadowed in its climactic moments.

The second movement fared similarly, as a central melody was passed among various instruments with differing interpretations and results. This highlighted some inconsistencies within the orchestra, as each solo, while objectively in tune, varied in musicality. Some were overly mechanical, while others soared into the furthest pews of Finney. However, the orchestra succeeded in Shostakovich’s spontaneous orchestral interruptions, abruptly silencing solos — these served as a commentary on censorship in the composer’s time. A flute might be interrupted by a celeste or a violin solo could be intercepted by a carnival theme, allowing insight into the anxieties of the era.

The third movement fell into the same pattern as the first, as the orchestra was too subdued to graduate from a lament to the all-out dread that one might expect from a section meant to mourn the murder of Shostakovich’s close friend. As the brass faded, the strings and woodwinds were left alone, then swallowed whole by further waves of sorrow before the fourth movement burst onto the scene.

With a straightforward march theme from the trombones, the fourth movement attempted to disrupt the tension of the previous three, and a battle quickly ensued. The thunderous blaring of the trombones was complemented by the fury of the strings, and the trumpets and horns returned with reinvigorated majesty. At times, this movement arrived at a triumphant celebration of freedom and success before being dragged back into the pits of repression. Parade and funeral were interspersed so often that this musical skirmish became its own spectacle. Eventually, the piece mellowed to a subdued conversation between violins, low strings and horns. Their discussion had reached a level of intimacy by the time a harp, acting as a harbinger of hope, entered, bringing the march tune previously borne by the trombones back into the fray. As the movement developed into climax, it introduced a joyous, dazzling sense of triumph.

The concert managed to balance the thoughtfulness of Isle of the Dead with the complexity of Shostakovich’s fifth symphony, but the performances were not equal. While the former expertly encapsulated the story of painter Böcklin’s isle and the composer’s frustrations with pre-Soviet Russia, the latter was too repressed for its own good, suffering until the final movement. But given the raucous applause that followed, this climax was more than enough.