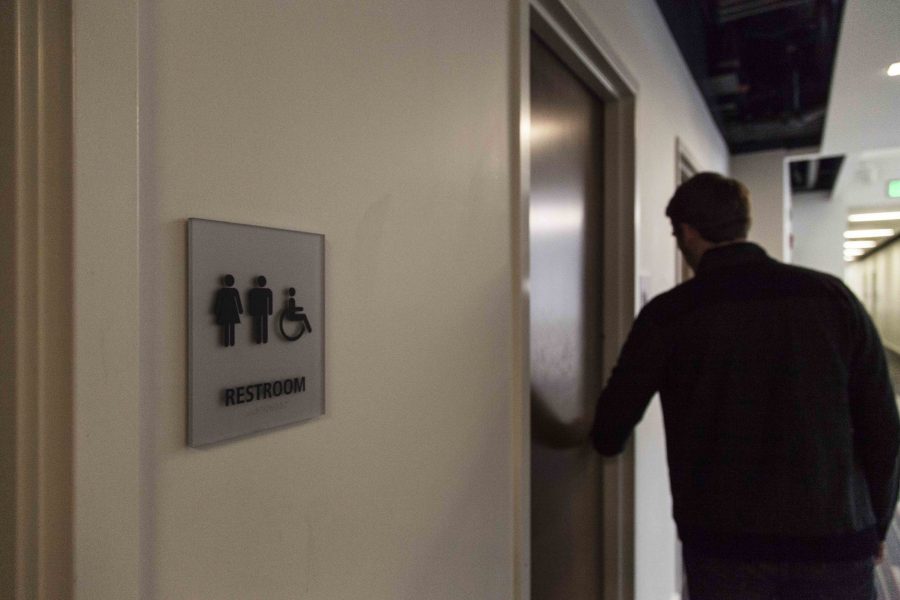 A student walks into a bathroom in the Science Center. Students have recently questioned the lack of gender-neutral restrooms in academic buildings.

When Conservatory students William Adams and Zoe Cutler brought up the lack of gender-neutral bathrooms in the Conservatory last year to Title IX coordinators, the initial feedback gave them hope.

Administrators said they would consider making additional gender-neutral bathrooms a component of last summer’s renovations to Bibbins Hall’s first floor, Cutler, a junior, and Adams, a sophomore, returned this fall to find the situation unchanged.

“One of the big things that seemed obvious to Will and I when we brought it up is that they renovated the first floor of Bibbins last year,” Cutler said. “So when we were talking to the [Title IX administration] about that, they were like, ‘Oh yeah, maybe because we’re renovating the first floor of Bibbins, maybe we can just convert some of the bathrooms,’ … and then it just didn’t happen.”

“Bibbins is where a lot of the classes are, and there are no gender-neutral bathrooms in that whole building out of the six bathrooms there, which means there’s no access there,” Cutler said. “If you’re in your Bibbins class and you’re like, ‘I need to use a gender-neutral restroom,’ you need to walk down to the first floor of Bibbins, across Central, to Robertson, up to the third floor — which is annoying.”

Adams and Cutler, both members of the trans and nonbinary student group Lilac, plan to get back on track with Interim Title IX Coordinator Rebecca Mosley, who took on the position July this year.

Mosley said there is a difference between residential and academic buildings on campus concerning Title IX, a federal statue that “protects people from discrimination based on sex in education programs or activities that receive federal financial assistance.”

“When you live in a space, you have more of a say of how the spaces are used,” Mosley said. “In the residence halls, the designations that are created are changed as frequently as the users need or want them to be changed, versus in a classroom building, the users are constantly changing. So it’s a different type of a challenge about how you would go about creating that space in a way that would be comfortable since you never know who’s going in and out throughout the day and [from] semester to semester.”

“Where some of this gets tricky is that there’s codes out there that we have to follow,” Mosley said. “So we’re trying to find ways of following codes and also make sure we have gender-neutral spaces.”

Mosley said she has only met with faculty and staff individuals so far in her first months as Oberlin’s Title IX coordinator, but stressed her enthusiasm to work with students engaged with the issues around gender-neutral spaces and restrooms on campus. She noted the example of how student opinions helped establish a single- use restroom in Wilder Hall’s basement to make the building’s restroom facilities more inclusive to nonbinary users.

Mosley emphasized that making these additions would require meeting with staff from the facilities and finance groups to see how feasible the renovations are, and that the logistics are the main thing in the way.

“This is something we are very supportive of and we want to make happen,” Mosley said. “We see the need for this. It’s just trying to figure out how to make it happen, that’s the current issue.”

Multiple students wrote and discussed the issue in the Oberlin 2019 Facebook group Sept. 22 after College sophomore Shira Cohen voiced her concerns about a lack of gender-neutral bathrooms in academic buildings at the College.

“Who do I fight (talk to fine) about making all the bathrooms in King, Science Center, etc. gender neutral?” she asked in the group.

Although a self-identified cis-female, Cohen said that after living in Zechiel House this year — a dormitory with a gender-neutral and a single-use bathroom on each floor — she believes this configuration would be ideal in all campus buildings.

“If we get enough people to be loud about it, they’ll have to do something about it, because Oberlin is really good about having safe spaces and accepting people outside the gender binary,” Cohen said. “In all of the [dorms], there’s always at least one gender-neutral or single-use bathroom on every floor, and I think that’s great. So why don’t we transfer that to academic buildings, where a lot of people spend even more time?”

Adams also noted how these changes would become much more probable with greater support from students and faculty.

“If other students want this to change also, everyone should be speaking up about it,” Adams said. “Because there can be a very vocal just a few of us but that may not be enough to make things change. But if we have a lot of student support about it, it will be easier to change the situation.”