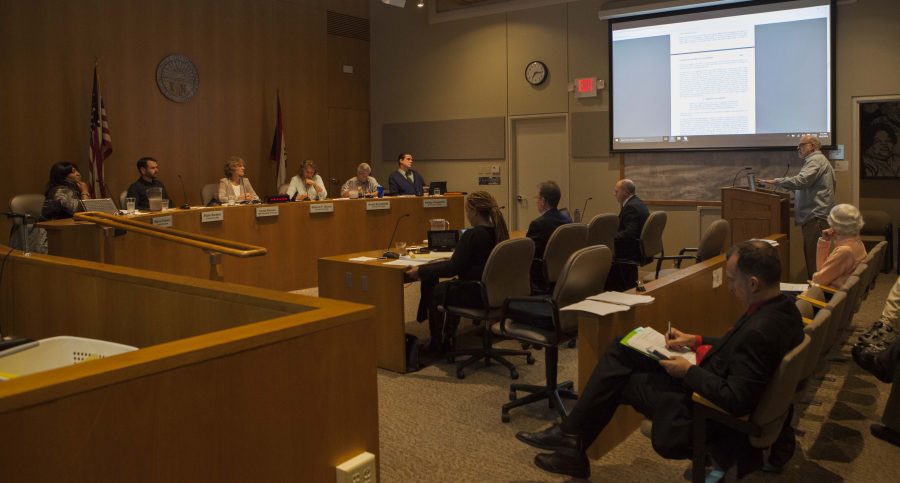 City Council listens to a resident share thoughts on the new council manual on Monday. Council hopes the manual will help orient new members and remind all members to remain constructive.

After two years of discord, City Council approved an orientation manual to help new members and promote a cooperative environment at their meeting Monday.

The manual covers the basics of Oberlin’s government and recommends how to best have productive meetings. The idea came from Councilmember Sharon Pearson, who believes it will improve overall communication and effectiveness in council.

“I think it will help us in our efforts to work as a team with respect,” Pearson said. “It will serve as a baseline from which all council-members can work.

Law Director Jon Clark clarified that the manual will not be required at every meeting, but will be more of a guide for new members and to get discussions back on track.

“This is not a set of rules that council is required to follow or for which there would be any adverse consequences if some of the suggestions in the manual were not followed,” Clark said.

According to Clark and Council-member Bryan Burgess, there was very little opposition to the manual, which was easily passed at the meeting following a few typographical corrections.

City Council decided to create the manual during a retreat in Feb- ruary 2015, following a tense period when multiple councilmembers asked former City Manager Eric Norenberg to resign. This August, City Council was unable to come to consensus on who to hire as Norenberg’s replacement, causing the city manager search process to start over again.

Aside from helping council be more effective in meetings, the manual is also a way to orient new members for their various duties. Vice President of Council Linda Slocum said she wishes something like the handbook existed last year when she had just begun serving on council and had trouble recalling all the logistics.

“As a new councilmember, I found there was more of a learning curve related to protocol and procedures than I had anticipated,” Slocum wrote in an email to the Review. “The Clerk of council provided an informative orientation session with new members and gave us pertinent documentation at that time. The Council Orientation Handbook reinforces a lot of what we learned then and fills in some of the gaps.”

New Councilmember Kelley Singleton agreed and emphasized the guide’s importance for those who might be considering joining City Council.

“I feel this could be very useful for someone who is contemplating running for election,” Singleton wrote in an email to the Review. “These are all things you should know before taking office in Oberlin. This does not take the place of attending meetings and talking to people before Election Day to prepare you for serving but can easily go hand in hand with that to make you a better leader of the city.”

The manual includes information on the actual the legal powers possessed by council, the chain of command in city government and repeated requests to “avoid rancor and bitterness.”

Prior to this manual, City Council wrote a list of rules approximately 10 years ago, but it didn’t thoroughly explain their procedures, which sometimes led to confusion and a feeling that newer members did not have an input in council’s inner workings. Pearson said there were many unwritten precedents that new councilmembers were excluded from.

“Something I hear a lot is ‘We’ve always done it this way,’” she said. “But where is it written down?”

In her first year on City Council, Pearson said she often experienced challenges like not knowing how to pass an urgent proposal or a general lack of understanding of how meetings were supposed to progress. Pearson said she hopes the manual will prevent this type of confusion in the future.

Councilmember Sharon Fairchild-Soucy also supported the manual and said it would be an important reference to ensure opposing views in meetings are respected.

That theory will face an early test this week as the controversial city manager search resumes. Recruiter Heidi Voorhees will discuss possible candidates for the city manager position with the council Wednesday. The city has gone 10 months without a permanent city manager.

However, the John F. Kennedy quote at the end of the manual indicates that the council is trying to turn the page: “Let us not seek to fix the blame for the past. Let us accept our own responsibility for the future.”