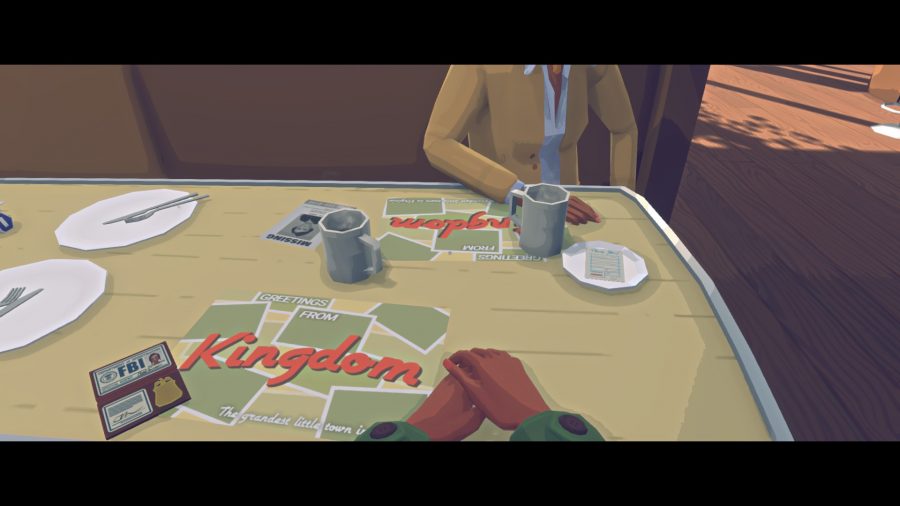 Virginia, the first project released by independent developer Variable State, follows the journey of Anne Tarver, a young FBI agent fresh out of school, and a more experienced agent named Maria Halperin in their investigation of the disappearance of a young boy in the small town of Kingdom, VA.

The vagueness of this premise is an intentional part of the game’s design. The best way to approach Virginia is with as few expectations as possible. The narrative is complex and nearly wordless other than the occasional on-screen text, relying heavily upon visual cues and a context-specific musical score to convey information and emotion. This allows the story to unfold at a steady clip without lingering on dialogue, highlighting instead the game’s impressive aesthetic design. Although not as graphically stunning as similar games like Firewatch, Virginia’s stylized presentation draws the viewer’s attention to clues much like the eye of a true FBI investigator would. The world sways with life, and though the lighting can get wonky at times, its less realistic aspects contribute to an unsettling vibe that the game fully owns.

Visual symbolism is vital to Virginia’s plot. The appearance of a cardinal, a broken key in Anne’s palm, a buffalo in the middle of the road, files upon files — these images and more are used recurrently throughout the narrative. Their meaning is elusive, even after two playthroughs, though they all seem to point to the connection between dreams and reality.

This lack of clarity is intriguing, especially given the complete lack of dialogue. Subtle interactions — a grieving widow, a priest talking to the sheriff, your partner Maria staring listlessly ahead — are minor in and of themselves, but when combined piece together a story despite what could be construed as a lack of focus.

What keeps Virginia from floundering is its approach to the passage of time. One flaw of the first-person narrative-based genre is the necessity of walking, often slowly, from one place to another. Virginia has a unique way of avoiding this: jump cuts. These cuts work just like editing in a film, moving the player forward after important events have concluded. Although a creative solution, these jump cuts can have the effect of making an already complicated narrative even more confusing.

For example, one of the first scenes in the game has Anne receiving a dossier from the FBI assistant director. It contains her true assignment in writing, but the shot only lingers on the vital text for a moment before a jump cut to another scene. It’s easy to miss the information presented in the document, key to understanding the rest of the narrative. Jump cuts abruptly interrupt important story beats on multiple occasions, which could be understood either as purposeful obfuscation of details or sloppy design.

This uncertainty is Virginia’s main problem. Did developer Variable State purposefully craft an experience that was meant to leave one confused, leading to questions about the game’s purpose and, in the end, bringing one to question the nature of reality? Or did the developer intend for these moments to be clearer, to ground us in the narrative and give us guidance, but failed to do so?

Ultimately, the game isn’t as enjoyable as one might hope. Minor gripes like visual hiccups and heavy-handed symbolism don’t detract much from the experience; rather, Virginia’s downfall is its uniqueness. The developers went for something new, but left out some key aspects of what defines a game. Virginia isn’t a game; it seems more akin to an interactive movie. This isn’t a malleable narrative.

However, that look-don’t-touch framework isn’t a bad thing. Overall, players’ experiences will be defined by their expectations. Those in search of a restricted immersive experience that inspires deep thought despite its flaws will find what they want in Virginia. But that niche is a small one.