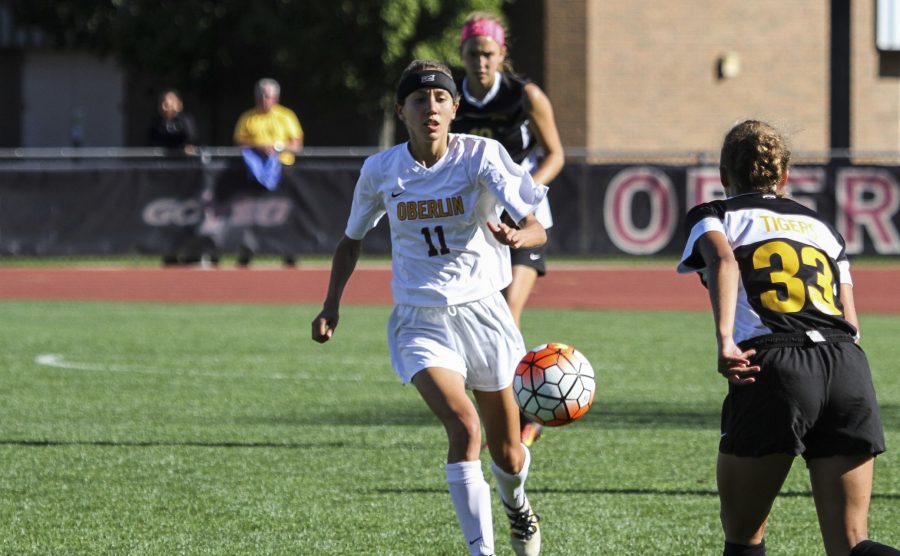 Senior midfielder Megan Herrmann settles a pass against DePauw University. After a 1–1 draw against The College of Wooster last Saturday, the Yeowomen are 5–3–1 overall.

Just two and a half minutes into Saturday’s game versus The College of Wooster, junior midfielder Hannah Cook sent a sweeping cross to junior forward Gwennie Gardiner. Gardiner found the back of the net for the seventh time this season, putting the team ahead 1­–0. Though The College of Wooster would eventually tie the score in the final minutes of the game, the 1–1 draw is the best result the Yeowomen have had against the Fighting Scots since 2005.

“It’s obviously never fun to settle for a tie,” French said. “That being said, we fought until the very end and had some good opportunities that we just weren’t able to put away. … I think everyone was really happy with how we played. We ended up getting a point in conference, which is the best result we’ve ever gotten against Wooster in the four years that I’ve been here.”

After the junior duo’s exciting play, both teams were scoreless for 86 minutes and the Yeowomen desperately clung to their one-goal lead. Unfortunately, the lead eventually slipped through their fingers. With four minutes left on the clock, Wooster’s Kennedy Payne broke past the line of defense off of a steal and scored.

Although the game ended in a draw, Gardiner’s goal represents the team’s year-to-year progression, as it was the first time the Yeowomen have found the back of the net against the Fighting Scots since 2005.

“It felt great scoring against Wooster,” Gardiner said. “It was fun to combine with Hannah Cook again, as we did so much our freshman year.”

Second-year goalkeeper Jordyn Morris saw 110 minutes of play as the game proceeded into double overtime. She did not hesitate to step up to the challenge, denying five-of-six shots on goal. Overall, both teams notched fifteen total shots.

Offensive production is a strength for the Yeowomen, who have outscored their opponents 23–14 this season. As a result, the team boasts the top scoring offense in the conference averaging 2.56 goals per game.

“When we are in season and working hard at practice every day, it is hard to notice how far we have actually come,” Cook said. “[The Wooster game] proved to the fans and ourselves that we can and will win games in conference this year.”

Oberlin went 10­–8 in 2014 and set the single-season wins record. Seven games remain in the 2016 regular season and Palmer said he is optimistic for the remainder of the season.

“Our goal is always to play our best and give our best effort. If we do, we can earn a positive result in any match,” he said.

Today, the Yeowomen have the opportunity to continue their success and build upon their 5­–3–1 overall record in their upcoming match against the Rochester College Warriors in Rochester Hills, MI. The Yeowomen fell to the Warriors, 3–2 in overtime last year.

“We’re heading to a non-conference game this Friday looking to fine-tune some of our play and get ready for Allegheny and [Wittenberg] next week,” Gardiner said.

After taking on the Allegheny College Gators in Meadville, PA, on Wednesday, the Yeowomen return home Saturday to host the Wittenberg University Tigers for Senior Day.