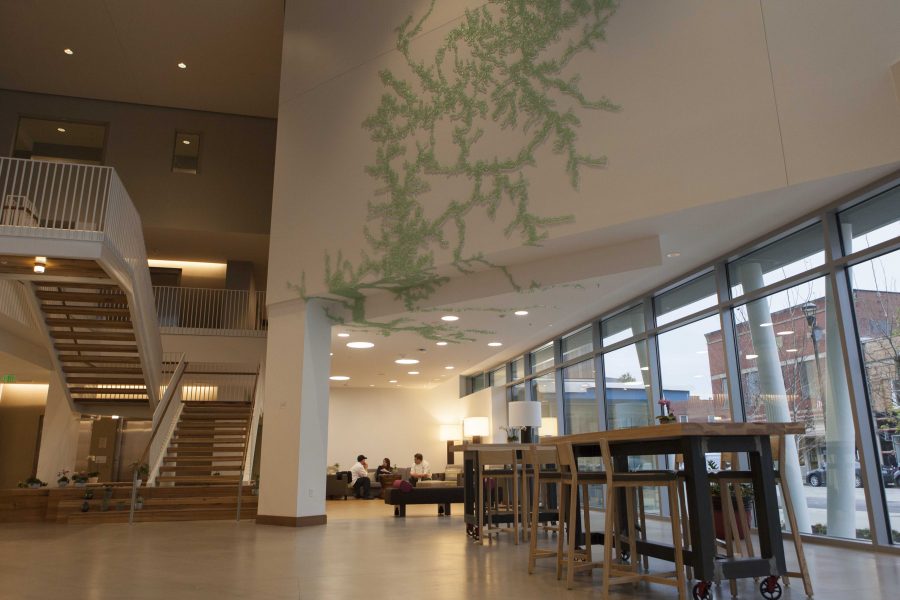 A collection of marbles in the shape of Ohio's aquifers clings to a wall in the newly-finished Peter B. Lewis Gateway Center. The installation, glued in place by artist James Ewart, is part of a larger sculpture series by Maya Lin and collaborator Edwina von Gal.

After a busy couple years of change, the Peter B. Lewis Gateway Center will finally be home to artist Maya Lin’s exhibit An Ecological Primer: A landscape in 3 parts. Lin is best known for entering the stage of massive art installations at age 21, when she won the 1981 contest to design the Vietnam Veterans Memorial in Washington, D.C. Since then, she has designed other memorials, along with many other pieces which have focused on the environment. An Ecological Primer uses landscape as a device to discuss releasing human control of land, honoring the water we depend on to survive, and issues of migration raised by climate change. As a permanent installation, Primer will be part of Oberlin in perpetuity.

The installation will complete what Lin calls her Ohio Trilogy, a sort of ode to the state developed in collboration with her brother, the poet Tan Lin. According to David Orr, Paul Sears Distinguished Professor of Environmental Studies and Politics, Emeritus and founder of the Oberlin Project, it’s no accident that Oberlin is the culmination of Lin’s Ohio-focused projects.

“Maya had read some of the things I’d written and was attracted to the Oberlin Project and the greater vision of the College,” Orr said. “Her philosophy as an artist and a person coincides with what we’re doing here, using art to clarify and dramatize issues of climate change.” The project’s website describes its aim as “to improve the resilience, prosperity, and sustainability of our community.”

The first part of An Ecological Primer visible when approaching the Gateway Center will be A Remnant Garden, a piece of native Ohio ecosystem regenerated within Oberlin’s city center. When it’s finished, the installation will be composed of two wetland-inspired water features, an old field garden and a miniature forested area. The street trees, most of which are already in place along East College Street, include oaks, maples, tulip trees, and persimmons. Lin’s longtime partner in landscape design, Edwina von Gal, spoke about these choices.

“I’m putting some aspens in because they’re the single most widely, naturally dispersed tree species; they appear in more ecosystems in the U.S. than almost any other tree,” von Gal said. “Maya’s interested in tracking trees that are moving up from the south that will be more resistant to climate change. And I’m naturally going to put in an Ohio Buckeye, because how could I not?”

Tan Lin is also a part of An Ecological Primer. His work will be located in the parking lot of the Gateway Center, to the northeast of the building. “Some that were, some that were not” is a poem about the migratory patterns of birds, which not only makes reference to the Lins’ interest in climate change but also to the migrations in their own family history. The poem itself comes in two parts: one that spirals into the center of the drop-off roundabout behind the Center — about birds coming into Ohio because of climate change — and one that begins in the middle and spirals out, about those birds which are leaving the state. In the lot itself, the parking spots will each be delineated by the name of one of these birds. Within the spot, a visualization of the wingspan of the bird and the direction in which it is headed will be depicted.

The lobby of the Gateway Center hosts the final component of Lin’s installation, a huge array of glass marbles that climb the wall facing the main entrance of the building.

“They represent the aquifers of Ohio,” artist and collaborator James Ewart told the Review, climbing down from the scaffolding he’d been standing on to hot glue marbles to the wall and ceiling. He explained that the marbles were another piece of Lin’s childhood, from her father’s work as a ceramicist at Ohio University in the ’60s and ’70s, which Ewart said was a time of experimentation in ceramics and glassblowing art. “Maya played with them as a kid and had been thinking about them for years,” Ewart said. “She found the one supplier that still makes them while working on a project for the Smithsonian Renwick Gallery.”

The Smithsonian piece, Folding the Chesapeake (2015), is similar to Lin’s piece in the Gateway Center lobby. In that project, the Chesapeake Bay spills over the walls and floor of a giant room, represented by 54,000 green glass spheres. Much like the Chesapeake at the Smithsonian, the Ohio aquifer system at the Center flows up the wall, holding light and refracting it just like the water it represents. Ewart pulled a handful of the marbles out of a bucket and rolled them against each other to demonstrate. “They’re all different,” he said. “They’re a raw material for fiberglass products, but what Maya likes is how they catch the light and create patterns.”

“I really like Maya’s aesthetic and she likes mine, so I can translate her idea of a landscape into a reality that’s in keeping with her environmental passion so it will not only tell a story but also look good,” von Gal said. “My job is to put a brake on things so that it translates to the natural world and can thrive. So like, with Wavefield, what color will the grasses be, how do you get things to grow, and how does it drain?”

Storm King Wavefield (2009) is another environmental reclamation piece focused on maintaining sustainability and carbon neutrality. It’s a giant earthwork, reminiscent of and inspired by Native American sites in Ohio like the Great Serpent Mound in Adams County. Lin’s commitment to producing art for and about Ohio is clear in many of her works, but perhaps especially the Ohio Trilogy, in which Oberlin is now a participant.

The first two pieces of the trilogy are Reading a Garden (1998), for the Cleveland Public Library, and Input (2004), for Ohio University in Athens, where the Lins grew up and both their parents were professors. Each work in the series combines Tan Lin’s writing with Maya Lin’s landscaping art, creating what Lin calls “poems that can be read and walked through.”

Reading a Garden is a sculpture in the Eastman Reading Garden outside of the library that has multidirectional text carved into the granite blocks of the pathways. Tan Lin’s words, which can be read in any order, interact playfully with the stone surfaces and the reflecting pool Maya Lin designed to contain them. Input echoes personal memories for the Lins and resembles an old computer punch card. Again, Tan Lin’s poetry becomes a part of his sister’s landscape, describing and enhancing the raised and sunk-in rectangles of grass and concrete that comprise the work.

“Oberlin has a wonderful reputation in history because of its relation to the environment, and had all the right ingredients for me — that doesn’t come along often in a project,” said von Gal. “We want to allow species to live in an urban environment and provide city planners with this idea of mosaics, ecosystems sprinkled through urban environments so that developed areas don’t have to be barren,” she said, echoing the foundational ideas of both the Oberlin Project and her own Perfect Earth Project, which promotes toxin-free landscapes. “One of the core concepts of what we promote is that every piece of land is a preserve and every person making decisions about that piece of land is a steward.”

President Marvin Krislov involved Maya Lin alongside Orr from the beginning. “Maya came to Oberlin a few years ago and spoke a lot about environmental sustainability and art, and how those two were important to her and work together,” Krislov said. “It’s been a prominent theme in her art.” He said that he approached her after the convocation, and they began planning for an environmentally-themed piece set at the LEED Platinum Certified hotel.

“Part of what makes Oberlin great, in addition to all the people here, are the works of art and architecture,” he said. “Having great art here is something that creates value, and it’s an asset to our community.”

Lin and von Gal also hope it will be something more. “These are plants and ideas that people can use,” von Gal emphasized. “If we are going to continue to create landscapes that will meet the needs of the future, we need to change our perceptions of what a landscape is. We control so much area, and we need to start conceding some land to nature.”