Off the Cuff: Eboo Patel, President of Interfaith Youth Core 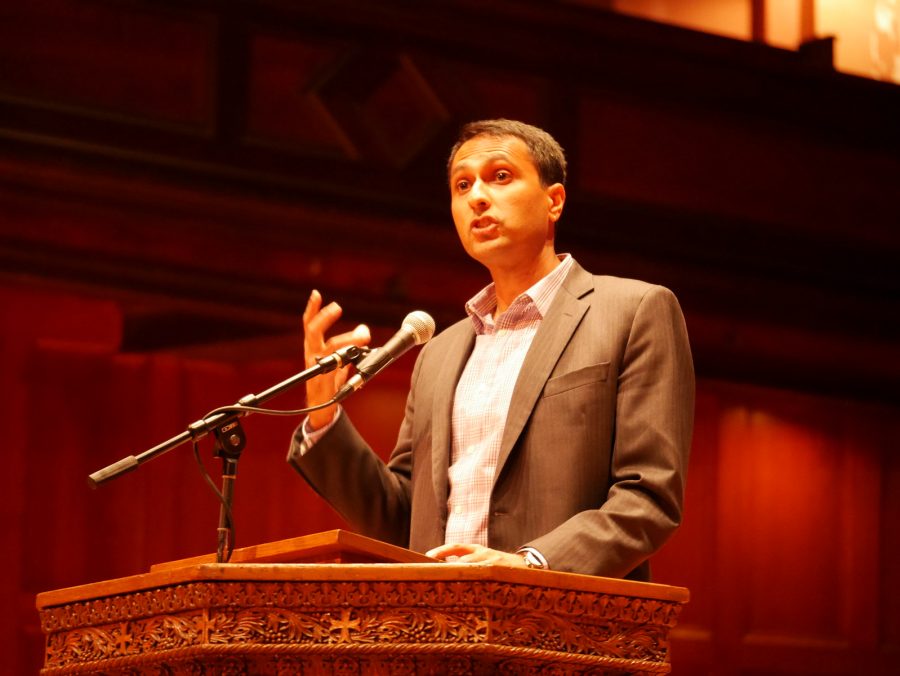 Eboo Patel is the founder and president of Interfaith Youth Core, an organization that works to promote interfaith dialogue on college campuses. In 2007, Patel published an autobiography titled Acts of Faith: The Story of an American Muslim, the Struggle for the Soul of a Generation, which won the Louisville Grawemeyer Award in Religion. Patel was a member of President Obama’s Advisory Council on Faith-Based Neighborhood Partnerships and in 2011 helped develop his administration’s Interfaith and Community Service Campus Challenge, an initiative that promoted interfaith dialogue on college campuses. A frequent speaker at colleges and universities across the country, Patel gave a talk in Finney Chapel Tuesday night. He sat down for a student media session Tuesday afternoon.

Why did you start the Interfaith Youth Core and what does it do?

My life is changed because of diversity work in college. From first-year orientation to RA training to coursework, I developed an identity consciousness. I became what I call a multicultural progressive, which is somebody who pays attention to identity and sees it as having a relationship to justice. Sometime during the course of my college career, I awoke to the fact that we never talked about religious identity or religious diversity. Even though religious identity and diversity played a huge role in the world, and so many of my social justice heroes were faith-based, it struck me that in all of the diversity conversations in college, it was largely missing.

What Interfaith Youth Core does is partner with college campuses to help them proactively and constructively engage religious identity and diversity — in part when it comes to student identities, but also as an intellectual endeavor. We think that part of the definition of being an educated person is being able to read The New York Times cover to cover with a reasonable degree of context. If you are unfamiliar with not only the theological distinctions between Sunni and Shia, but also the geographic spread, you’re going to have a hard time understanding a good part of what’s going on in the world. So the mission is to work with colleges and universities to do high-level, sustainable religious diversity work.

What specific things do you do to accomplish that mission?

We’re in partnership with a range of colleges and universities to create a new subfield in the academy that we call Interfaith Studies. Religious studies and world religions tend to focus on traditions — Islam and Hinduism; Interfaith Studies focuses on Muslims and Hindus. And of course Muslims and Hindus are not simply pure exponents of the tradition, they’re also shaped by economic, political, psychological, social and geographic contexts.

In our early days, the big question was what kind of programs could you run on college campuses that brought students from different religious identities together, and the most obvious programs were service learning programs. We still think that that’s a good thing to do, but it’s become one of 25 things that we do rather than the main thing. So we’ve now branched out much more to the academic side of a college campus and also to questions of what are the identities that this college campus makes salient.

Interesting question: If you were to videotape first-year orientation, what percentage of first-year orientation would be on diversity and identity issues and what percentage of that would be on religious identity and diversity issues? To use a sociological term, these are cultural texts by which you get to know an institution. Why is it that this institution spends X amount of time on this dimension of identity but only Y amount of time on that dimension of identity?

How is Interfaith Studies distinct from Religion departments at colleges and universities?

We view college campuses as an ecosystem. The administration deals with things like Strategic Plans and fundraising and public identity. There’s student affairs staff that work very closely with students to create a cam- pus environment; there’s student leadership; there’s the variety of academic departments. And our goal is to involve various parts of the ecosystem of a college campus in the proactive engagement of religious diversity.

You can think about other identity issues in the same way. If you think about racial identity, you hear a lot about it at first-year orientation here, right? It’s a big part of residence halls conversations. It’s a big part of public events. There’s coursework on it; there are probably majors that deal with race matters at Oberlin. So we view religious identity very similarly.

How do you make sure that interfaith dialogue isn’t superficial — that it goes beyond simply noting what different religions have in common?

How do you deal with the fact that a lot of religions make a claim of exceptionalism? How do you reconcile those claims with interfaith dialogue?

We say that what diversity work is, is helping people with deep disagreements on fundamental matters disagree in a manner that is civil, and being willing to work on other things together. Claims to the ultimate are not the only differences in religious traditions. If you are a very observant Muslim, you are waking up very early for prayer. You are probably disturbing your roommate. Does your roommate have a right to complain, woken up every day at four in the morning? If you are an observant Muslim student, and your roommate is engaged in intimate relations in the room, that probably makes you very uncomfortable, and you probably view it as invalidating your prayer, or you could view it as that. Does your roommate have to stop?

Those are the questions I’m interested in. And not just Muslims, a range of traditions — the more observant and traditional end of the spectrum would be uncomfortable with overt expressions of sexuality. Forget LGBT expressions — any overt expressions of sexuality. They would also very likely have more traditional norms around gender. So if you’re in a religious studies class and you visit a mosque, the imam of the mosque politely asks the women to enter in a different entrance, cover their arms; women with skirts cannot come in and women will be seated behind the men. Do you do it? Is it different if it’s an evangelical church? Those are the questions I’m interested in. Those are the differences people don’t necessarily like. But people have a right to those identities, right? That’s what I mean by saying: How do you have a healthy, religiously diverse democracy?