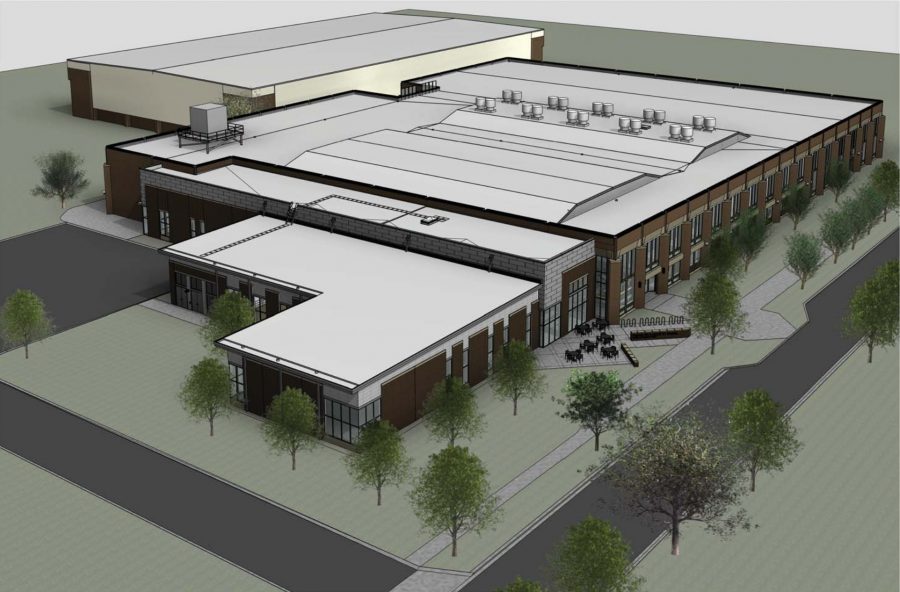 A model of the recently approved expansion of Philips gym. The expansion will include several new fitness rooms and a renovation of Carr Pool.

Plans for an expansion of Philips Gym that include the construction of several new workout rooms and the updating of Carr Pool were unveiled by the administration this week. The renovation, which administrators say is aimed at expanding health and wellness opportunities for all Oberlin students, not just athletes, was approved by the Board of Trustees Oct. 10.  Construction will begin in the coming months with a projected completion date of spring 2018. The College has not yet released information on the estimated cost of the project, but the Oberlin News-Tribune reported Aug. 30 that it would be $15 million.

President Marvin Krislov said that the update to Philips, which was constructed in the early 1970s, is much-needed to keep up with increasing demand for the space.

“I think everyone thinks that the Philips gym is really not adequate,” Krislov said. “I think more employees are using it than ever, and a lot of faculty and staff use it. We’re expanding recreational opportunities for faculty and staff and the student body. I don’t think there’s a single person I’ve talked with who thinks that it’s not absolutely critical that we have a better facility.”

Planned facility improvements include the addition of several fitness rooms, including a wood-floored wellness room that will host spin classes on stationary bikes that the college plans on purchasing, as well as yoga and dance classes. Another multipurpose room will house the gym’s current stock of cardio machines and new dumbbells, kettlebells and other equipment available for free weight workouts.

Carr Pool will remain in its existing space but receive an overhaul. The planned improvements include new pool tiling, pool heating system, air circulation system and aesthetic improvements like large viewing windows. Lane space will also be expanded and a warm down hot tub for divers installed.

“The pool is just riddled with one issue after the next. It’s a drain [on financial resources],” said Winkelfoos. “Why dump any more money into a facility that isn’t working?”

To make room for the expanded wellness spaces and updated pool, two college-owned Woodland Street houses adjacent to the gym will be demolished and some squash and racquetball courts will be repurposed to serve as contractor offices during construction and, later, a meet management room for Swimming & Diving coaches. The gym’s main entrance will also be relocated near the southernmost end of the hallway of coaches’ offices and equipped with a turnstile for increased security. No current parking spaces in the Woodland Street lot adjacent to the gym will be demolished. In fact, several dozen parking spots will be added just south of the addition.

The funding for the Philips renovation project will be drawn almost entirely from alumni donations. Some of the donations were solicited by the college’s recent capital campaign while others were raised through outreach efforts by the athletic department. Winkelfoos said that any claims that the money for the Philips renovations could have gone to other projects on campus are erroneous.

“Donors give to what they want to give to,” Winkelfoos said. “This is a passion project for a lot of people, especially a lot of alums. Because maybe they didn’t understand it while they were here as students, but as you get older you start to recognize how important it is to take care of yourself physically and mentally. … You can’t force a donor to give money to a project. This is us telling the story of what we have, and what we could have, and how it could help.”

Winkelfoos also stressed that the project is not simply driven by the athletic department but is an initiative of the entire Oberlin administration. She said that former Dean of Students Eric Estes was a key player in advocating for the renovations. Interim Vice President and Dean of Studies Meredith Raimondo has also consulted with the athletic department on how to make the space inclusive for all students.

Following a trend of alumni-funded athletics facility improvements on campus, these renovations come on the heels of the $8 million construction of the Austin E. Knowlton Athletics Complex, completed in September 2014.

The renovation project also responds to the growing sentiment that the Philips gym weight room is overcrowded. Strength & Conditioning Coach Grant Butler said the new space provided by the expansion will help alleviate that problem.

“While we are blessed to have the gym space that we do, it is still difficult for everyone to get what they want out of their weight room experience,” Butler said. “The added space will disperse traffic and also provide multiple environments for gym goers to choose from.”

Once the expansion is completed, varsity team lifts coached by Butler will remain in the current Philips weight room and Olympic lifting racks will stay there as well. That weight room will, however, continue to be a space that is open to any gym user.

“There needs to be more space for athletes to workout, practice and train. We also need to address the fact that [non-athletes] don’t really feel like they have enough space for themselves,” said Herman.

Some students initially expressed concern that the new wing would be a varsity athlete-dominated space, but Winkelfoos said that is patently false.

“There’s an interesting kind of rejection of the project that people believe that it is for varsity athletes and that couldn’t be any further from the truth. It’s a very modest facility but it gets us exactly what we need for the campus,” said Winkelfoos. “There’s going to be another option for your typical student that wants to come in and [work out]. … I’m hoping that the new fitness center can make this a much more inclusive and welcoming environment,” she said.

The Trustees’ approval of the renovation also re-ignited a debate about the gym’s accessibility. Last spring, students from the Student Health Working Group and other campus organizations advocated for women and trans only safe hours during the gym, to no avail. The department responded instead by instituting “Quiet Hours” Monday–Friday from 1–3 p.m. and publishing the times of varsity team lifts in case other gym patrons wanted to avoid them.

Others have asserted that the athletics department does not do enough to promote mental wellness with programming at Philips. Office of Disability Services Student Accessibility Advocate Dana Goldstein asserted that this is a problem not just of the athletic department, but of Oberlin as a whole.

“I think that the athletic department tries very hard to promote wellness, offering a wide variety of courses and advertising programs on the home page of blackboard,” said Goldstein, who is also a member of the softball team. “Regarding mental health, though, I feel that the Department often fails to draw a connection between bodily wellness and mental wellness. Honestly, this isn’t a problem specific and exclusive to the Athletics Department, this is a problem with our culture in and beyond Oberlin. People will talk about anything and everything at Oberlin, except disability.”

Krislov responded to these concerns by asserting that the new space will offer increased opportunities to promote holistic wellness among the student body.

“I think [the Philips expansion] very much ties into the discussion of mental health and wellness here, and that having good recreational facilities really helps health and wellness of everyone, and that’s been a big concern of a lot of students,” Krislov said. “And the other thing is, for employees as well, we have tried to do some things that promote healthy behaviors and this is very much a part of it.”

The renovations, Winkelfoos believes, will also prove to be an excellent tool to attract prospective students and athletes and bring Oberlin’s facilities up to par with peer schools with modern athletic facilities like Kenyon College and Denison University.

“It’s a recruitment piece,” Winkelfoos said. “And I don’t say that just for athletics, but for the college in general.”