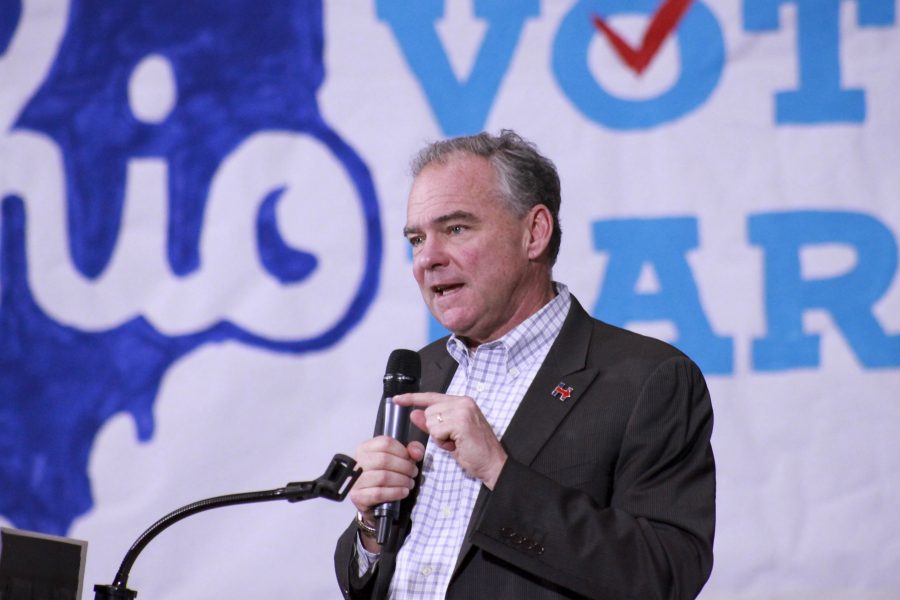 As a battleground county in a swing state, Lorain County will play a critical role in the bitter struggle to decide the next president Nov. 8.

Both the Republican and Democratic campaigns have headquarters downtown in the City of Lorain, in addition to a Hillary for Ohio base here in Oberlin. On Thursday afternoon, Democratic Vice Presidential candidate Tim Kaine spoke at a rally in Lorain High School.

“You guys are more than a battleground, you’re a checkmate state,” Kaine was quoted saying by the Chronicle-Telegram.

In the last general election only 67 percent of registered voters in Lorain County came out to vote — roughly 143,250 people — though Oberlin tends to have a fairly high turnout.

Typically, outsiders’ stereotypes of Oberlin are reflected in how often it votes Democratic. During the 2012 election, Oberlin voted overwhelmingly Democrat with 4,657 votes for President Obama and 479 votes for Mitt Romney, according to the Lorain County Board of Elections. at came to around 89.7 percent of the 5,192 votes being for Obama.

In addition to an increase in registrations, Lorain County has seen a spike in the number of absentee ballots, with a 3,500 increase from the previous election. is increase is a result of looser poll restrictions and an effort to make voting more accessible to different demographics. Adams estimated that there could be as many as 40,000 votes cast through absentee ballots this election, which could potentially reduce poll lines and wait times on Election Day.

According to Adams, that might not bode well for Democrats.

“Democrats typically dominate early in-person absentee voting in Lorain County, particularly during a major election such as this one,” Adams said. “Republicans do better with mail absentee and voting at the polls on Election Day.”

Ohio has historically been a swing state in most elections, helping to elect Republican President George W. Bush in 2000 and 2004 and Democratic President Barak Obama in 2008 and 2012. Ohio has only voted against the winning candidate once since 1944, in 1960 when John F. Kennedy beat Richard Nixon.

While Ohio may be a wild card in most elections, Lorain County has run Demo- cratic in every general election since 1988. In 2012, 56 percent of Lorain County’s voters voted for President Obama, with over 81,464 votes, compared to Mitt Romney’s 41 percent of the votes.

Still, history isn’t stopping David Moore, the campaign chairman of Lorain County for Donald Trump, from campaigning around the county.

“Trump seems to have reached across the aisles,” Moore said. “He’s a candidate that has irritated both sides of the political spectrum so that seems to resonate with a lot of people because people seem fed up with the establishment right now.”

While Lorain may be solidly Democratic, the fourth congressional district in Ohio has been a long-time Republican stronghold for the state. e fourth district, which is widely recognized as being severely gerrymandered, includes portions of Lorain County such as Lorain and Oberlin, as well as numerous Republican strongholds like Allen, Champaign, Logan, and Shelby counties, among others.

is creates an overwhelming Republi- can majority and grim odds for Democrat- ic Congressional Candidate Janet Garrett against Republican incumbent Jim Jordan who has held the position since 2007.

In addition to the Congressional race, Ohio is also seeing a large de cit in the Senatorial race with the Democratic Candidate Ted Strickland trailing the Republican incumbent Rob Portman by more than 15 points according to RealClear Politics’ polling average as of Thursday.

Regardless of party or political affiliation, all the candidates are encouraging people to go to the polls and exercise their right to vote.

Reiterating the unsubstantiated claims of a “rigged election” coming from his candidate Donald Trump, Moore had only one piece of advice for Oberlin students:

“Go out and vote — and if you’re a Democrat, please just vote once,” Moore said.