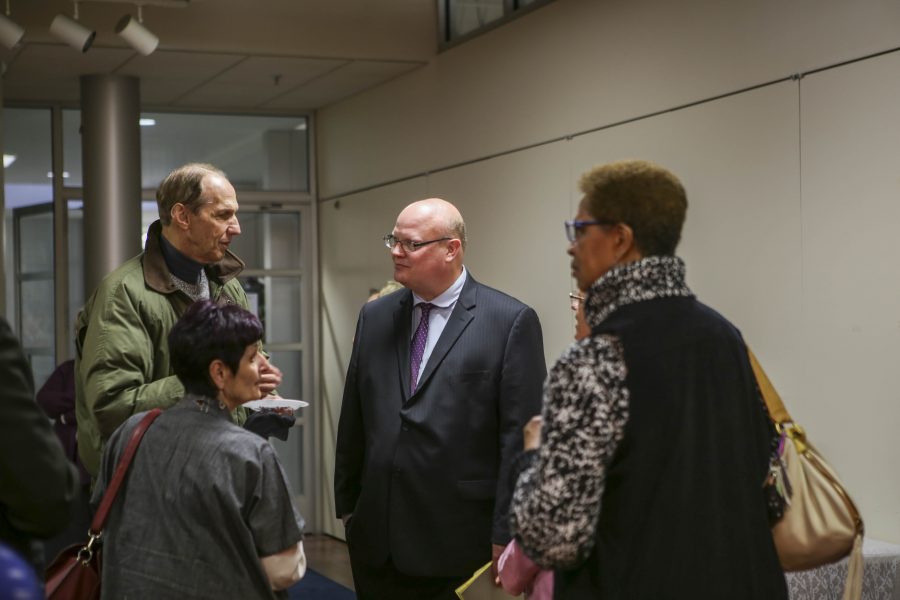 Robert Hillard, the candidate chosen by City Council to be the new City Manager, speaks to residents at a public forum Thursday night. Council made the final decision shortly after the public forum.

Hillard was previously the city manager for Allegan, MI, where he served from 2005–2016. The pick comes as a bit of a surprise, as Hillard was added to the list of candidates for the position after two other finalists took positions in other municipalities.

According to city councilmember Bryan Burgess, Hillard’s qualifications fit what Council was looking for.

“Mr. Hillard has been in city government for 25 or so years,” Burgess said. “He has experience working in diverse communities.”

City Council held a meet-and-greet at the Oberlin Public Library Thursday evening, where Oberlin residents could meet with three of the final candidates and express their opinions.

According to Burgess, residents quickly came to the same conclusion that City Council had: Mr. Hillard was the right person for the job.

“Certainly council had an impression of the candidates based on those two rounds of interviews,” Burges said. “But it was very important for us to get feedback from the public, and it was interesting that the public had the

same impression of the candidates that we did.”

The previous city manager, Eric Norenberg, left the position for a similar one in Delaware last December and Oberlin has been left with no permanent replacement since then. Oberlin Finance Director Sal Talarico has been serving as interim city manager in the meantime.

Speaking to the Review before the decision, councilmember Sharon Pearson emphasized the need for unity.

“As a council, we need to come together on behalf of the Oberlin residents,” Pearson said. “I don’t want to emphasize the divisions in the council — I want to be a peacemaker.”

Councilmember Kelley Singleton agreed, saying that the council is trying to do what they feel is right for the community, and disagreement is fine as long as the council can come together and make a decision that best benefits Oberlin.

City Council was previously divided in its decision between Talarico and Lowell Crow, the former city administrator of Monmouth, IL. The Council proved unable to reach the 5–2 vote required by Ohio’s revised code to make a final decision. Crow dropped out and the search reopened.

According to Burgess, the Council published a list of job experience that an ideal candidate would have, including experience working in a diverse community as well as experience in a college town or a town with one other large employer.

Oberlin, said Burgess, has three primary employers: the city, the College, and the Federal Aviation Ad- ministration. He said that the council thought it was important that the new manager have some previous experience negotiating with another large entity or institution within a city. He added that the council was looking for a candidate with an environmental background.

“We see ourselves as leaders in sustainability,” he said. “It was important for us to find a candidate who had similar commitments.”

Prior to the Council’s decision to hire Hillard, councilmember Scott Broadwell said he wanted to look beyond past differences and focus on the decision at hand.

“I won’t make a secret of the fact that I supported Sal [Talarico] for the position, but we have four good candidates here,” Broadwell said. “We need a candidate who is a good fit, and that’s a tough decision.”