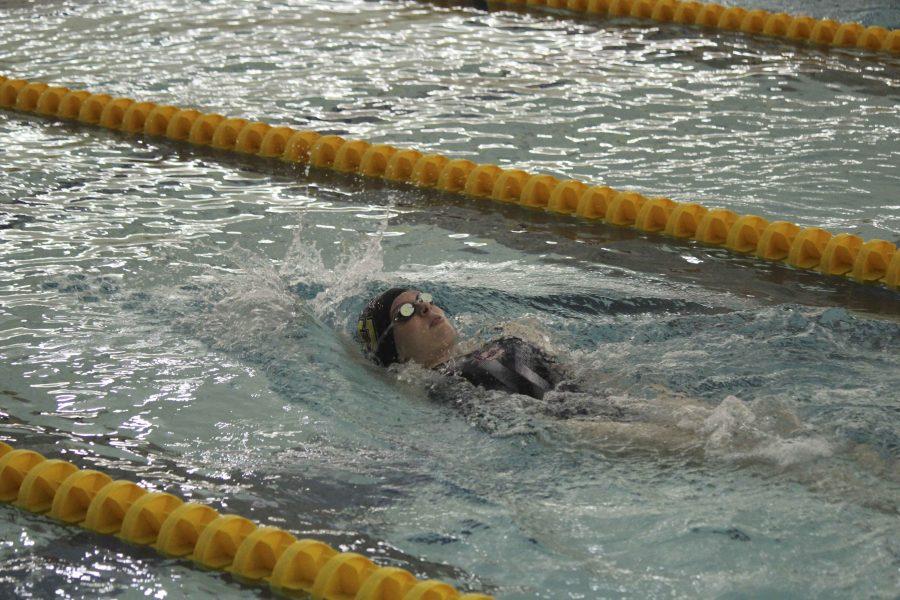 The swimming and diving teams competed against The College of Wooster for their second conference matchup of the season last Saturday, but the Halloween weekend meet resulted in both squads falling short to the Fighting Scots. The Yeowomen lost 164–115 while the Yeomen fell 157–115.

Head Coach Andrew Brabson said he believes that there were bright spots in the meet despite the loss.

“They outswam us quite a bit but there were positive takeaways,” he said. “We did pretty well and had some results to be happy about.”

The women’s team had strong performances in numerous events. Senior Maddie Prangley swam to victory in both the 200-yard and 500-yard freestyle, at times of 2:34.00 and 5:18.34, respectively. Senior captain Nora Cooper outpaced the competition in the 100-yard freestyle finishing in first with a time of 56:04.00, and went on to score second place in the 50-yard free, clocking in at 26:08.00.

On the diving side, first-year Katja Zoner won the 3-meter dive with 217.55 points and the 1-meter dive with 206.15 points. With combined success from veterans and rookies, the teams’ depth has emerged early in the season.

“We’re a young team, but that never means we should be overlooked,” said senior Vera Hutchison, who logged top finishes in the 400-yard individual medley and 100-yard butterfly.

Although the men’s team came up short, it dominated in certain events. Newcomers shined as first-year Michael Lin swam the fourth-fastest 100-yard breaststroke in Oberlin swimming history at 59.55 seconds. The Sugar Land, TX, native continued his winning streak in the 200-yard backstroke with a time of 2:00.09 before posting a second-place finish in the 100-yard butterfly. With multiple individual wins over the weekend, Lin said he is optimistic for more team success as the season progresses.

“This weekend was a really strong start for me,” Lin said. “We’re proving that we’re all working really hard in the pool and there should be more successes to come.”

Both swimming and diving teams’ first dual-meet wins of the season came on Oct. 28 against Hiram College.

“Considering most of us were swimming in our off-events, it was a big accomplishment for us,” first-year Matthew Berry said.

The Hiram meet was also a strong showing for first-years on both the men’s and women’s teams, specifically in the 1,000-yard free. First-year Devyn Malouf topped the pack in the women’s field with a time of 11:49.86 while Berry’s 11:07.58 finish bested the men’s side.

Brabson said he was particularly pleased with the performance of the rookies.

“There are lots of first-years on the team still getting acclimated to Oberlin and the training program,” Brabson said. “But they’re a really hardworking crew, learning to swim some races they haven’t swam in the past and gaining lots of experience.”

Looking forward, the Yeomen and Yeowomen will host the Case Western Reserve University Spartans tomorrow at 1 p.m. at Carr Pool in their second home meet of the 2016–2017 campaign. With a conference win already under their belts, both teams are focusing on continuing their progression against the Spartans.

“Our goal at [the Case Western meet], as well as every meet, is to try to improve,” Brabson said. “We may be in a tough Division-III conference for swimming, but we’re only looking up. The team loves to learn and improve.”