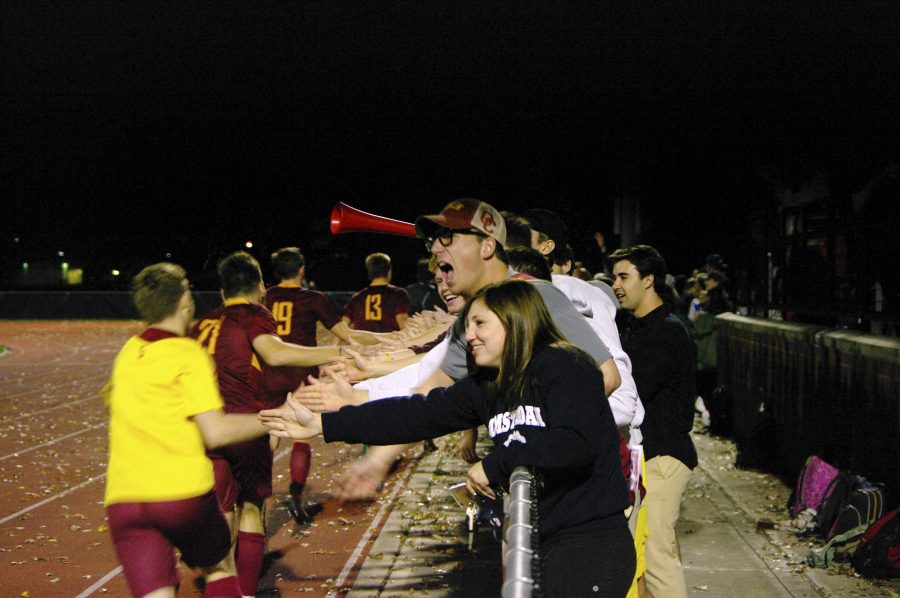 Fans congratulate the Yeomen after their 2–1 NCAC semifinal victory over Wabash College. The victory propelled the team to its first conference championship match in school history.

Men’s soccer is headed to the North Coast Athletic Conference Championship for the first time in school history after besting the Wabash College Little Giants 2–1 in the NCAC Semifinal on Wednesday, Nov. 2. Throughout the team’s first home field NCAC playoff game since 2005, Oberlin’s faithful crowd rattled the bleachers and provided the Yeomen with extra momentum.

As they have for most of the season, the Yeomen looked to put the ball at the feet of two-time All-NCAC Second Team selection senior midfielder Nick Wertman. Wertman scored in the 23rd minute off of a through ball by sophomore midfielder Trenton Bulucea, only to find the back of the net again in the 63rd minute. One of the premiere players in the NCAC, Wertman currently ranks second in both goals scored, 16, and points, 35. The Westlake, OH, native, considered one of the most clutch players in Oberlin history, said he credits his team for his success.

“Everything that I’ve done individually has kind of just been a result of good team play, and good individual work by everyone else on the team,” said Wertman. “Confidence and belief in the system is something that has definitely evolved over my four years.”

While Wertman’s goals earned Oberlin a dominant 2–0 lead for most of the game, they were tested in the second half after an 82nd-minute goal by Wabash junior forward Francisco Trejo. But, the Yeomen were able to put a stop to the Little Giants’ rally, dominating possession for the final seven minutes of the game.

Looking ahead, the Yeomen, currently ranked No. 6 in the Great Lakes Region, prepare to take on the national ranked Kenyon College Lords tomorrow in the conference championship game. Oberlin’s only previous matchup against the Lords on Oct. 11 ended in a controversial 3–2 defeat. Miscommunications between a ball person, officiating staff and the Yeomen led to a scramble on the field, resulting in a late goal from Kenyon in golden goal overtime. That loss, combined with the fact that the Yeomen have been knocked out of the NCAC tournament semifinals by the Lords in two of the past three seasons, has left the Yeomen eager for a rematch.

This year’s close-knit squad may be prepared to put those past losses behind them. Head Coach Blake New said that the team’s veteran leadership — which includes nine seniors — chemistry and maturity have been fundamental to its success.

“I think this team is kind of like a family,” New said. “We’ve had really talented teams in the past, but we’re always just missing that one little thing. I think this year the team has come together.”

First-year forward/midfielder Jack McMillin said that maturity shines through in the way the team approaches road games, which is key, given its game versus the Lords will be played at Kenyon’s McBride Field.

“There’s definitely something to be said in the way the culture’s been about improvement, and now we’re finally seeing the benefit of that,” said McMillin. “For road games, we treat it like a business trip, and that definitely goes into the culture of professionalism.”

The championship game will feature the top-two offenses in the NCAC. Oberlin brings the second-best attack, which averages 2.5 goals per game and sits just behind Kenyon’s offense that produces 2.72 goals per game. In the Yeomen’s heartbreaking loss to their bitter rivals earlier this season, Kenyon outshot Oberlin 33–10 and 19–4 on goal. Despite the lopsided offensive statistics, New said the Yeomen are simply focused on playing the game their way.

“We always want to keep the game at our tempo,” said New. “We’re going to have to come up with a game plan that puts pressure on them while still playing our style.”