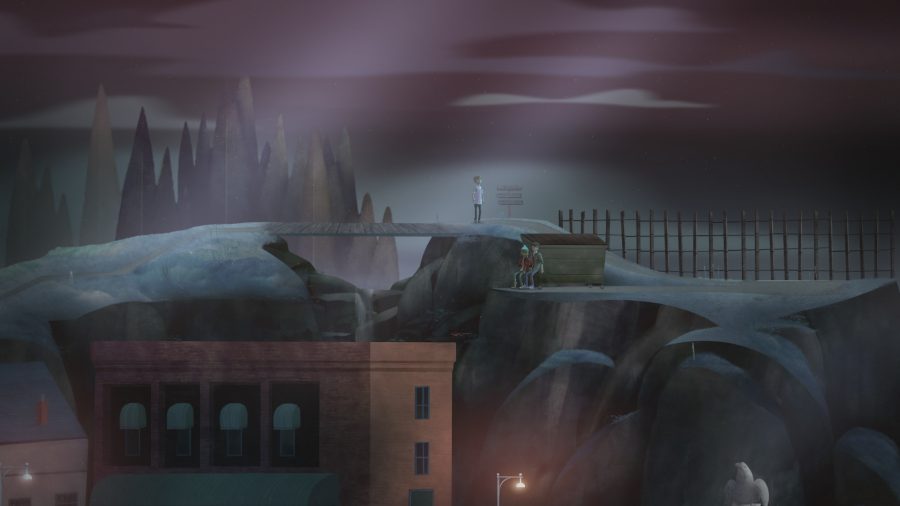 Oxenfree, Night School Studio’s latest independent release, is an old-school ’80s-style horror thriller with a strong emotional foundation and a focus on dialogue.

Oxenfree is a difficult game to classify. Night School Studio’s most recent title, consisting mostly of wandering around and interacting with both people and the environment as the story slowly unravels, doesn’t fall squarely into any one genre. You play as Alex, a high schooler who is bringing her new stepbrother Jonas to an island party. When only five people show up and Alex’s antique radio starts finding strange signals, things quickly take a turn for the supernatural.

This ostensibly trope-filled story might suggest that Oxenfree is at odds with its intended audience. Most walking simulator games tend toward looser narratives, focusing more on the landscape than the player-character itself. However, Oxenfree flips this paradigm. Borrowing heavily from ’80s teen horror flicks and cerebral thrillers, the game aims to pay homage to those classics. Were the narrative to venture too far toward its source material, the story would seem derivative, and if it leaned toward parody, Oxenfree would fail to capture its self-aware yet serious aesthetic.

The game walks this line perfectly. While each of the characters borrows from last-generation teenage stereotypes — the prototypical “mean girl,” the burnout, the mysterious new kid, the cool one and the quirky one (Alex, incidentally) — the four-hour narrative makes a point to let each of these characters fall away from their respective archetypes. Each becomes sympathetic, irritating, sincere and terrified in turns, displaying a wide range of emotions that showcases Night School’s writing chops.

Oxenfree’s unrelenting focus on character interaction necessitates a script that feels real. Other games starring teenagers have struggled to avoid falling into cliché dialogue rife with angst, but Oxenfree’s charac ters are believable. They attempt to keep themselves safe from the island’s pervasive, terrifying influence, which laces every conversation with tension. The characters’ feelings are always tangible, and when clichés are used, they serve a purpose, setting the stage for later subversion of those same clichés. And the dialogue system is as unique as the writing itself, implemented with nuance rather than the usual good, evil and neutral options available in most games. Above all, the flexibility of the dialogue options contributes to a sense of realism, making Oxenfree one of the finest examples in recent memory of game writing done well.

Accompanying the excellent script is a haunting soundtrack. Reminiscent of ’80s synth and old-school horror ambience, Oxenfree’s score elevates the tone of the game perfectly. Each part of the island has its own music that accents its mood, and every otherworldly encounter brings a new track to the table. Never obtrusive, Oxenfree’s music is interwoven skillfully with the narrative and setting, proving that a game’s score can be just as integral to the experience as the narrative or visual aesthetic.

In terms of visuals, Oxenfree distinguishes itself from the pack once again. The characters are rendered in 2.5D, colored with a simple pastel palette. The backgrounds, in contrast, are all two-dimensional and look like paintings, making each environment feel vibrant and unique while enriching the game’s exploration aspects.

The dialogue, art and music together form an immersive experience, but the simplicity of the mechanics beneath it all leaves something to be desired. The only kind of puzzle in the game involves Alex’s radio, which has some interesting narrative implications, giving the player access to creepy hidden anomalies that pull back the layers of the island’s mysteries. The puzzles themselves, though, are repetitive and unchallenging, consisting entirely of tuning the radio to different stations until you hear something. Later in the game, you’re given access to a better radio that, when tuned, gives clues to collectibles, but this addition is optional and peripheral. Since this represents Oxenfree’s only real trial, the puzzles lack enough substance to constitute any kind of difficulty.

The story, on the other hand, is one that shouldn’t be spoiled. Its twists and turns, measured pacing and final reveal are incredibly satisfying. Depending on Alex’s dialogue and actions, each one of the supporting characters reaches a different end; at the closing credits, the game displays the percentage of other players that received your ending versus the rest, giving a nice sense of scope to the potential outcomes. And although the journey was spectacular, the ending is hard to parse. It’s unclear if the game earned its finale, but it’s certainly unexpected, heavy and thought-provoking.

The whole package is excellent, and though the mechanics and overwrought ending might take some deserved flak, at the end of the day, it’s about who you’re with. If you’re looking for a game that focuses on its characters and the ways in which they change, Oxenfree won’t let you down.