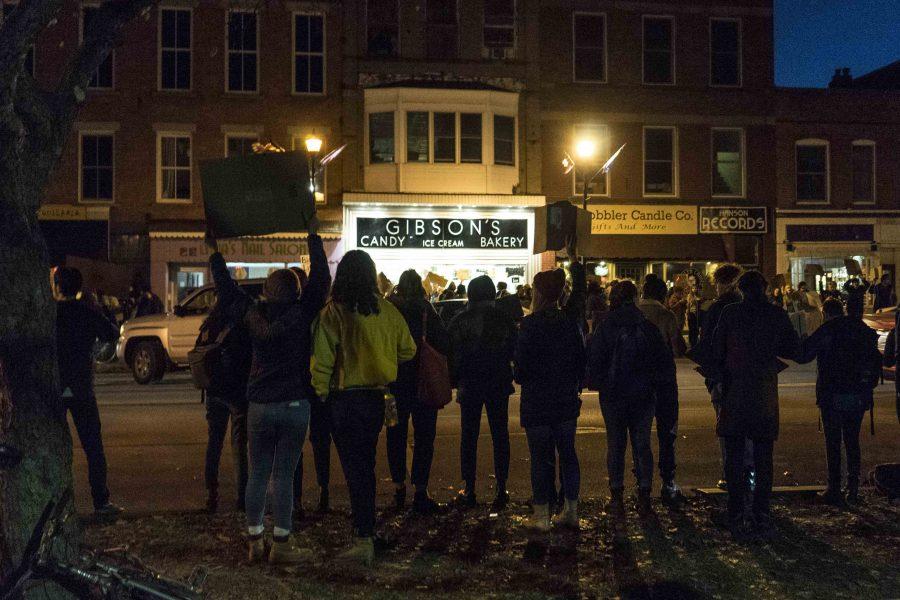 Students chant across the street from Gibson’s Bakery in Tappan Square Thursday evening. Protests ran from around 11 a.m. until Gibson's closed at 11 p.m.

Update: Since this article was originally written, President Marvin Krislov and Dean of Students and Vice President Meredith Raimondo have issued an official response to Student Senate’s resolution ceasing all support for Gibson’s Bakery, financial and otherwise. The text of the response can be found here.

Chants of “No justice, no peace” reverberated across campus from early morning into late last night as hundreds of protesters lined West College Street, calling for a boycott of Gibson’s Bakery.

An altercation between Gibson’s employee Allyn Gibson and College sophomore Elijah Aladin Wednesday evening led to the Oberlin Police Department arresting Aladin and classmates Endia Lawrence and Cecelia Whettstone, all of who are Black, in what many students are saying is a case of racial profiling.

The police booked Lawrence and Whettstone for assault before they were released on $1,000 bail, but Aladin was transferred to Lorain County Jail prior to his arraignment hearing at Oberlin Municipal Court this morning for one count of robbery.

Discrepancies between eyewitness and police reports have led to conflicting versions of the incident, but what remains abundantly clear is that the scuffle between Aladin, 19, and Gibson, the white son of store owner David Gibson, escalated quickly and had moved outside of the store to across the street when officers arrived at the scene.

According to the incident report filed by the Oberlin Police Department, Gibson thought Aladin was attempting to shoplift two bottles of wine by concealing them under his jacket when he confronted him. The report almost entirely consists of information from interviews with David and Allyn Gibson.

“Allyn stated Aladin attempted to leave the store, so Allyn took out his phone and attempted to take a picture of Aladin and that’s when Aladin slapped Allyn’s hand and phone and caused it to strike Allyn in the face,” the report reads.

However, College junior Andy Goelzer called that account “completely false” and said that “there was no conversation before Allyn attacked him.”

Instead, Goelzer said that Gibson used force immediately on Aladin, who they say was standing in line to pay instead of attempting to leave.

“He was literally just standing there, and Allyn Gibson comes running from the back of the store screaming, ‘Shoplifter!’ and grabs him,” Goelzer said. “The kid is like, ‘Get off me, I’m not doing anything.’ At this point, people in the store are starting to yell, ‘Get off him’, ‘What are you doing?'”

Both the police report and the eyewitnesses agree that Gibson then pursued Aladin to the back of the store when an altercation ensued as Gibson attempted to physically detain Aladin and two bottles of wine ended up on the floor.

The police report details that Aladin allegedly threw the bottles of wine on the floor, but eyewitnesses said that the bottles could have fallen from shelving that was knocked over during the struggle.

“They could’ve been in his shirt,” College junior Andres Gonzalez said. “They could’ve just as easily been from the aisle. A lot of the merchandise was knocked over in him pushing this guy into the aisle.”

The police report and the eyewitnesses sharply disagreed about who the aggressor was.

“Allyn stated he never threw a punch at Aladin and just kept attempting to grab him to keep him from hitting him and leaving the store,” the report reads.

In contrast, Goelzer stated that they called the police out of concern for Aladin’s safety.

“At this point, a few people in the store start running over to try to pull him off, and there’s like four people trying to pull him off and no one can manage to break him free, and he’s hitting this kid and putting him in a chokehold,” Goelzer said.

Aladin allegedly managed to break free and ran out to the sidewalk, where Goelzer stated that they saw Gibson tackle Aladin again. At this point, witnesses say Whettstone and Lawrence physically tried to free Aladin by hitting Gibson.

“They kind of rolled together — you couldn’t tell who was who,” College first-year Yue Yu said. “I [saw] the two girls start to kick onto — I couldn’t see who.”

Aladin, allegedly pursued by Gibson, then ran across the street to Tappan Square, where the struggle resumed, with Whettstone and Lawrence joining again, according to witnesses.

College junior Angie Vaaler described the fight as a “ball of people,” and College junior Jake Berstein said that it seemed like there were punches coming from both sides. At that point, police arrived at the scene and broke up the scuffle.

“As officers approached the area, Sergeant [Victor] Ortiz, and Officer [Raymond] Feuerstein both stated they observed Allyn Gibson lying on his back with several individuals kneeling over him punching and kicking him with several other individuals in the immediate area,” the report reads.

But according to Goelzer, Whettstone and Lawrence were trying to free Aladin, not injure Gibson.

The police quickly detained Whettstone and Lawrence and placed them in separate police cars. The officers then arrested Aladin and interviewed David and Allyn Gibson.

According to Oberlin Police Lieutenant Michael McCloskey, store employees have a legal right to detain shoplifters, although he noted that the department does not recommend that employees do so because it often leads to situations escalating.

“The Ohio Revised Code does allow store proprietors or employees of those stores to detain and arrest shoplifters,” McCloskey said. “If they have probable cause to believe that someone is trying to take items from the store, they can legally, in a reasonable manner, detain them for a length of time until police get there to arrest the suspect.”

McCloskey also said that Aladin was charged with robbery, a felony, instead of shoplifting, a misdemeanor, because of the physical altercation. Robbery in the third degree, which is how the incident will likely be categozied, can carry a sentence of one to five years in prison.

Gonzalez said Gibson was in the wrong, regardless of whether Aladin was shoplifting. This echoed the sentiment of many students, who said that the situation was rife with racially fueled undertones.

“If he had been shoplifting, that’s not a reason to chase him and throw him into the ground and beat him up,” Gonzalez said.

“People are afraid that this is how it’s going to be,” Gonzalez said. “For me, I’m Puerto Rican. As a person of color, it’s f—ing scary.”

However, to long-time Gibson’s employee Trey James, who is Black, race had nothing to do with it.

“If you’re caught shoplifting, you’re going to end up getting arrested,” James said. “When you steal from the store, it doesn’t matter what color you are. You can be purple, blue, green, if you steal, you get caught, you get arrested.”

According to a flyer distributed by protesters, this incident was far from Gibson’s first instance of alleged racial bias.

“This is a racist establishment with a long account of racial profiling and discrimination. Today we urge you to shop elsewhere,” the statement read.

This morning at Dascomb Hall, a sign replaced the bagels and donuts from Gibson’s that are usually served at breakfast, reading, “Our apologies for the inconvenience.”