Off the Cuff: Professors Shelly Lee and Gina Pérez 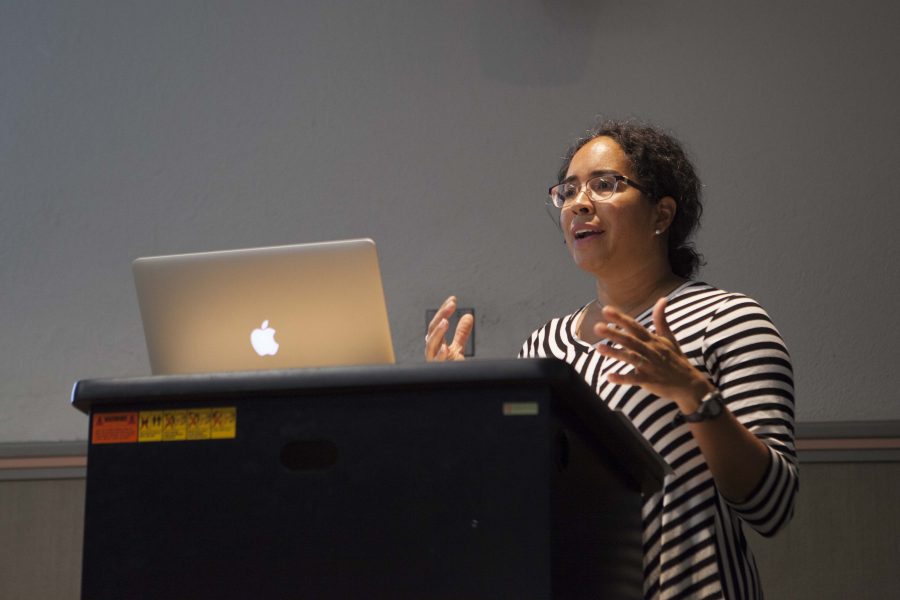 Professors of Comparative American Studies Shelley Lee and Gina Pérez held a teach-in on immigration, education policy and the rights and opportunities afforded to undocumented students Monday. The event took place as part of UndocuWeek 2016, a series of events sponsored by Obies for Undocumented Inclusion to raise awareness of the struggles that undocumented students go through. Pérez specializes in Latinx studies. Lee, a history professor who authored A New History of Asian America, focuses on Asian-American history and has written op-eds for Salon, Truthout and Inside Higher Ed.

How did the teach-in go?

Shelley Lee: We thought it went well, it was well attended. We tried to bring different historical and contemporary perspectives and knowledge on the issue of undocumented immigrants, and we had a pretty lively Q and A afterwards. I think students are very eager. They want to be better informed; they have a lot of questions.

Gina Pérez: I think so, too. It built on an event that the same students had organized last spring that was more broadly on legislation. This one was about undocumented immigrants in education and social policy more broadly, which I really appreciated. One of the things that Shelley and I have been talking about is how not only are students eager for this knowledge, but it also is an opportunity for us to learn even more and do research that keeps us going so we’re drawing on our own expertise. These are real opportunities for us, as well.

What was your reaction to the election results?

SL: My thought in participating in the teach-in, that was the day before the election, was just to share some knowledge and have a conversation about undocumented immigrants with the idea that we might have a chance to reform the law, that we might have a chance to push the new administration to enact comprehensive immigration reform, which no one’s been able to do. We’re facing a totally different scenario now.

GP: Shelley and I have been working on an op-ed piece, and we were working from the assumption it was going to be about putting pressure on presumably the democratic candidate to enact meaningful immigration reform that would build on some of the things that President Obama did, but would also move away from some of the other kinds of policies that happened under his administration, like mass deportation. I feel like since that time it’s just been a whole shift and retooling of our thinking — both for this op-ed piece, but also about what to say to students and how to teach our classes. Actually, as a result of Shelley’s suggestion, I looked at the Trump campaign website yesterday to see what the actual immigration platform is. It actually kind of strikes me as sort of a parody. It doesn’t even seem like a real platform around immigration. It’s really sobering. Things that I was nervous about before, I just feel totally scared now.

SL: Our thinking was focused on federal legislation and now it’s: What do we even push for since no one is going to listen to us anyways? Our focus has gone from what’s going to be possible at the federal level to what do we need to do here, now, to protect our undocumented students.

GP: And not even just undocumented students. One of the things we talked about at the teach-in was that even students who are the children of immigrants, a lot of them come from mixed-status families. There are plenty of families where you have members who might be undocumented, some might be legal permanent residents and some who might be U.S. citizens. So the uncertainty and the fears around immigration, even if they don’t affect the students themselves, affects them because it affects their family members, it affects their households, it affects their community. There’s an urgency that we’re taking to the administration now more than ever because there’s this incredible uncertainty. Even around things like DACA, Deferred Action on Childhood Arrival, it’s one way for young people to remain in the United States in a protected, temporary category. All of that is up for grabs. It’s very clear based on Trump’s platform that that’s one of things he wants to rescind as soon as he can. Although he said he wants to build the wall first, so we might have some time.

What is the College doing to protect undocumented students? Can more be done?

SL: Julio [Reyes] at the MRC has been very instrumental in supporting those efforts.

GP: Exactly, he’s actually the liaison for undocumented students on campus. There’s a lot of efforts to clarify what else the administration can do. That’s where we are now.

SL: The most meaningful work has actually been taking place on the ground with students, with staff like Julio, and I think now we need to push administrators — the president, general counsel.

GP: At this point there really has to be a commitment on the part of the administration to match the kinds of work that has been going on at the ground level. And that’s what we’ve been working on, to make sure that there’s free legal council for all students who have questions about immigration. And it’s not just Latino students, it’s not just undocumented students, it’s a whole range of students who are affected by these things.

What are you most worried about from a Trump administration?

GP: I’m worried about more punitive measures, I’m worried about rescinding executive orders; I’m worried about not having any checks and balances on any of the draconian legislation that has been enacted at the state level that could suddenly become part of federal platforms again. We’ve seen that with the Sensenbrenner Act in 2005 and 2006. That’s what led to these mobilizations in Chicago and Los Angeles. I’m very confident that people will respond, but I’m worried that without any checks and balances in place what that might mean at the federal level as well as at the level of states and municipalities.

President Obama had kind of a mixed record on these issues, right? He signed executive orders, but he also authorized a lot of deportations.

SL: That’s actually characterized the thrust of most immigration policy from the 1980s onwards, where there would be a combination of amnesty with a ramping up of enforcement. Obama’s not unusual in that regard. Since the ’80s, that was the only acceptable form for immigration reform: little bit of amnesty, but enforcement gets stiffer. It was very much in keeping with the thrust of immigration policies for several decades. But there was still some hope for the possibility of reforming immigration to be more flexible and compassionate because immigration history in the U.S. on the whole has been very spotty and problematic. But I think there has been a general direction toward — this may be really hard to generalize — but there have been patterns toward greater openness, a policy rooted in compassion. And I think that’s going away.

GP: I think that Clinton and Trump agreed on a couple of things regarding immigration, and border security was one of them. You ask either one of the candidates about their platform, it actually came up in the third debate, and they both started from border security. What Shelley is saying is absolutely true. There’s been this long history of having a preoccupation about the border, fortifying the border, pouring lots of money into border enforcement and border security, even while trying to provide different pathways for legal residency. It’s a really mixed bag of things, but the one thing that has been consistent since the 1980s is the focus on the border, which intensified after 9/11 in the amount of money, technology and new equipment to fortify the border. In that sense, Democrats and Republicans unfortunately both concur.

SL: But there’d always be a kind of humane element in those policies. But now that’s all going to be wiped away, and I think we’re just going to have a very punitive security-obsessed immigration state.