Campus Relies on Fracking in Transition to Coal 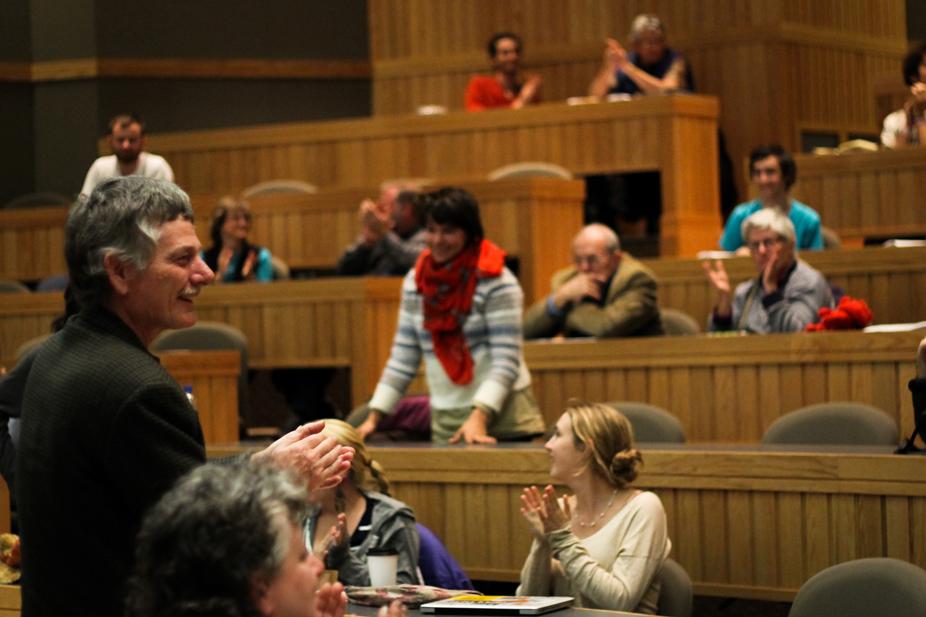 Students stand as panelist John Williams congratulate them on their work in advocating against fracking. The students pictured have all visited Youngstown, OH in an effort to ban the use of hydraulic fracturing.

Although Oberlin’s recent enactment of the Community Bill of Rights may be viewed as a victory among anti-frack students and community members, Oberlin Anti-Frack has not wavered in its efforts to create a more transparent and comprehensive understanding of the myriad of issues behind hydraulic fracturing, or “fracking.” While initiatives to ban fracking on campus have made great strides, there is one recent development in which fracking is still extremely prevalent — the College’s imminent switch to “natural” gas.

A part of #NoFrack November, the Impacted Community Members Panel that was held on Sunday included several individuals from surrounding communities whose lives have been directly affected by the effects of fracking.

College senior Alice Beecher, a member of Oberlin Anti-Frack, said that one of the goal’s of the panel was to “help people understand that fracking is an intersectional issue, and that it affects people in a lot of ways that aren’t just affecting the environment.”

Beecher went on to list fracking as not only an environmental issue, but one that affects health, reproductive justice, worker’s rights and the poverty rate.

“I think the best way to bring those issues to light is to amplify the voices of the people who are directly experiencing it,” said Beecher.

Featured stories ranged from a mother’s disgust at a methane-infused well placed adjacent to an elementary school, to an ex-employee’s recount of his teeth “snapping off like pretzels” after having been exposed to the gases. Another prevalent theme was the fracking industry’s opacity.

“They tell you all the good stuff, but nothing about what you’re getting into,” said Randy _____, a truck driver who had been previously employed by the fracking industry. “They don’t want workers protected because they don’t want you people to know what they’re doing.”

Another panelist recounted how her local officials, while claiming to protect against local fracking, would allow the industry to drill on their own land.

“Two of my three township supervisors have signed leases for their own personal property. So they don’t care about helping anyone like me who’s going through this; all they care about is how much money they’re making on their property. They’re suing because they don’t feel like they’ve been getting paid enough, because they find out that other people are getting paid more. There really isn’t anybody to help us,” said Patti Gorcheff.

Although such accounts of caginess on the part of government officials is hardly new, many would say that  when it comes to sustainability, Oberlin has been comparably transpicuous.

Some students, however, have made it clear that they disagree.

The College announced its plan to switch from natural gas in the spring of 2012 and has since been confronted with disconcerted students who believe that the administration should be clearer in their description of this shift.

“Even the word ‘natural’ gas [implies that] it’s natural, it’s green, it’s good for the environment. It’s a phony green argument,” Beecher said when describing the framework that the fracking industry uses to appeal to the public. “Natural gas would [be] better for the climate, if they didn’t use fracking.”

According to Beecher, forums such as The Source — the schools official communications hub — describe natural gas as a “greener” fuel, which is misrepresentative of the sustainability of natural gas. She also described several of the trustees, as well as the Environmental Defense Fund, as “explicitly pro-fracking.”

“Some of our administrators here at the College have bought into [this framework], which is really disturbing to me. There’s a big disconnect, because there’s a lot of trustees [and members of the] administration that come from these elite backgrounds, but they don’t engage with these communities that are obviously hurting from this industry. All they do is read some report about how natural gas is better for the climate, and they [agree with] it.”

In an email to the Review, College junior and Anti-Frack member John Bergen described the administration’s stance on student concerns as “unreceptive.”

“We [had to] move to conversations with senior administrators and the Board of Trustees. Last December we held a silent demonstration during a Board of Trustees dinner where we recognized the financial limitations on the decision, called for quicker development of truly renewable heat sources and asked that students be given a greater voice in how College decisions are made,” said Bergen.

Bergen also stated that, although he recognizes that the decision may be the only financially viable one, it is still “ethically terrible.”

Bergen then elucidated on what he views as the negative aspects of the College’s decision. The adversities mentioned were the investment in natural gas boilers, the College’s alliance with the fracking process, the amount that the switch will contribute to global warming and its contradiction with Oberlin’s image as a green institution.

“Investing [in the boilers] makes little financial sense [because we are planning to transition from them in 2025], and [they] may be used as an excuse for slowing down the development of truly sustainable heating in the future. Second, we are complicit in the toxic fracking process, affecting communities around us and across the world. Third, while numbers of the lifecycle emissions (how much CO2 is generated through extraction, transportation, and burning) of the fracking process aren’t conclusive, there is evidence to suggest that burning natural gas won’t actually do much to reduce the amount of carbon we burn. Finally,” Bergen continued, “it is contradictory to Oberlin’s image as a leader in sustainable initiatives — other schools already have this or more advanced systems in place, and with better funding (or more dedication placed on attracting donors) we could move towards being a leader in sustainable campus heating.”

When asked for a statement regarding the College’s subscription to fracking, the Office of Environmental Sustainability declined to respond, stating that the ‘From Coal to Carbon Neutrality’ up-and-coming website should prove to address all concerns.

Although the College endorses panels in which individuals who have been directly impacted by fracking can share their battle wounds, it continues to show just as much support for the processes that helped forge those very wounds.

“Natural gas is fungible,” said Bergen, “meaning that it all ends up in the same refineries and there is no meaningful way to distinguish between fracked or non-fracked gas. [If we continue with this course of action], we will be buying fracked gas and therefore helping to fund the poisoning of the people of Ohio.”