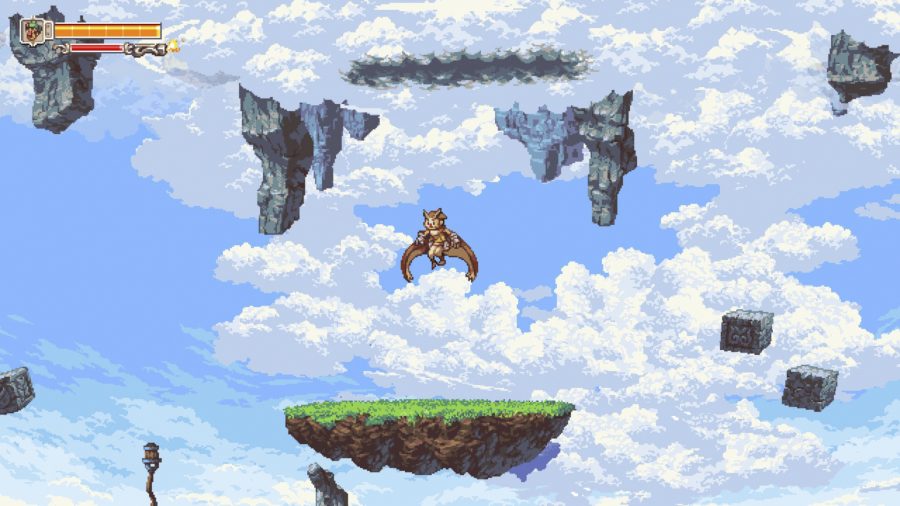 Learning from failure is what makes a hero. This idea is ingrained in Owlboy, an independent platformer game released Nov. 1 by D-Pad Studio. Using a hi-bit pixel-art style, Owlboy follows Otus — a young owl in training — on his adventures through the world. It begins innocuously, with Otus chasing a villain called Troublemaker through the town of Vellie, but quickly picks up from there.

Owlboy is visually stunning. The pixelated character sprites are wonderfully articulated, giving both central and side characters identity simply through their design. The world is equally lush and terrifying, with ruins providing sprawling locales for exploration that hide danger behind every corner. Each location is unique but feels congruous within the larger game-world. The finer details granted to every aspect of the world makes the visuals stand out: the swaying of grass, the rushing of water and small specks of snow falling from the sky all feel paradoxically real in the pixelated style and add more depth to an already beautifully realized world.

The special attention paid to the visuals is matched by the soundtrack, a mixture of retro-style sounds and orchestral suites that combine to create a grand atmosphere. Exploration of the wide-open sky is accompanied by grand swells, while sneaking through a heavily fortified ship is appropriately scored with tense strings and startling horns. The grandiose score makes the sections where the only sounds are that of the wind or footsteps that much more impactful, as the absence of ambience gives an impression of worldly disorder. Together, the visuals and music form a well-realized world.

Owlboy truly soars, however, in its controls. In other platformers, the player’s character generally jumps around, moving carefully from platform to platform while taking out enemies. The challenge in these games comes from a necessity for finesse. But that’s not the case with Owlboy, which sidesteps convention by granting the player flight. This isn’t the pseudo-flight seen in Mario titles, nor the clunky wing-flapping of Castlevania: Symphony of the Night, but fully airborne traversal. Movement is vertically inclined, with Otus flying seamlessly from area to area without a need to land. This change in movement flips the platforming genre on its head. D-Pad Studio’s expert handling of this mechanic keeps it from taking the challenge out of the game or becoming a gimmick. The flight doesn’t feel like an overpowered ability, but requires timing and precision to execute. There are moments where you can progress by exploiting the game, but these situations are few and far between.

Along with flight, Owlboy’s other prominent mechanic is the companion system. Over the course of the game, Otus gains friends to assist him, each one of them equipped with a unique quirk that dictates how to use them in various situations. There’s little incentive to stick to one companion over another, as it pays to swap between them strategically to adapt to different encounters and puzzles. What’s better is that these characters are not static — they are incredibly fleshed-out and gifted with well-written dialogue. Over the course of the adventure, you’ll get to know each of them well, especially in Otus’ small cutscenes with them, which elaborate upon the characters’ relationship with both the protagonist and the game-world.

Some small gripes aside — a few situations are too harsh, and one companion gained later in the game is superior to the others — what really surprises is the story. One might expect a simple yarn to tie the adventure together, but instead, Owlboy happens to be one of the best narratives in recent memory. Otus’ inability to speak isn’t just an excuse for the prototypical silent protagonist trope; it has real narrative stakes. The game opens with Otus’ repeated attempts to impress his teacher. He fails over and over, trying to be the owl his teacher wants him to be. He is berated for his shortcomings, and has nightmares of what others think.

In spite of his struggles, Otus moves on. The plot twists and turns, playing with expectations, but Otus is at the core of this experience, trying his best to save the day. Sometimes he doesn’t. Sometimes your best isn’t good enough. But Otus moves on. The story is equal parts whimsical and serious, saccharine and tragic. Moments build up well, and character arcs develop in brilliant ways. At around seven hours, this adventure was captivating throughout.

Owlboy isn’t perfect. There are some problems here and there, and the game can be frustrating at times. But its themes come through vividly, and it has a big heart.