OMTA Looks from Stage to Stars in “Fly By Night” 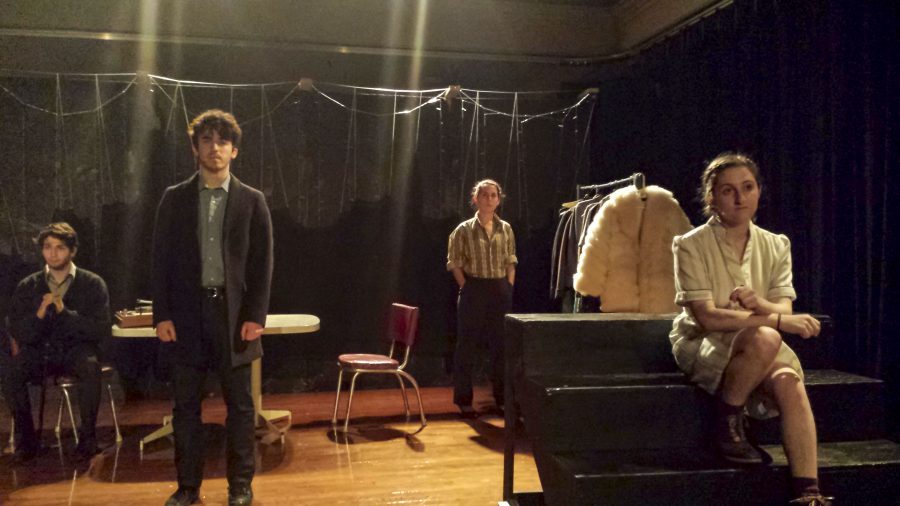 The cast of OMTA’s Fly by Night, a rock fable depicting the fraught lives of an array of people living in New York City, holds a dress rehearsal in Wilder Main Space Tuesday.

Oberlin Musical Theatre Association’s rendition of the 2014 Off- Broadway musical Fly By Night raises questions of cosmic significance and the vicissitudes of fate. The production will take place in Wilder Main Space this weekend.

“It’s sort of about that tension, but it’s also partly about Harold’s boss at the deli, who is trying to figure out what he’s all about,” said College junior Han Taub, who directed the production. “It’s partially about this playwright who is trying to put up a new musical with Daphne in it. And it’s also about Harold’s father, who is dealing with the loss of his wife.”

One of Taub’s directorial decisions involved the character of Joey Storms, played by College sophomore Isabel Forden, a playwright who decides to cast Daphne in a leading role and whose gender Taub changed for OMTA’s rendition of the script.

“I changed [Joey’s] gender so that one of the relationships in this show becomes queer versus every relationship being straight, because I’m not about that,” Taub said. “I think it will be interesting to see how people react in that light.”

“Joey is supposed to be male, but I am playing Joey as female, which is fun, because I fall in love with Daphne,” Forden said. “So there’s some gay love triangle action happening, and that’s really exciting. It’s gay, and it’s fun.”

The play jumps backward and forward in time, guided by an omniscient narrator played by College junior Kira Scala, but for the most part it spans the year between Nov. 9, 1964 — the day that Harold’s mother dies suddenly — and Nov. 9, 1965, when the Northeast is plunged into darkness after a safety relay fails at a power plant in Ontario.

Michael Mitnick, one of the creators of the show, spoke about what makes it unique to him.

“It’s a little, earnest musical that aims to find moments of truth,” he told the Review in an email. “Some of the themes of the musical are fate [and] free will and the interconnectivity of seemingly disassociated events and symbols.”

In this production, the cast finds moments of truth in their explorations of fate, connections and the stars.

“[The show] plays a lot into these ideas of mystical themes,” said College first-year Paul Lawrence, who plays Harold’s father, Mr. McClam. “One of the characters is very into astronomy, so there’s a lot of themes about the stars. We end up looking up at the night sky a lot. I think there’s a lot of magic and wonder and also confusion and uncertainty. Because on one hand, you have this idea that anything can happen and that if you trust the unknown your life can become great, but on the other hand you have this idea that the unknown is scary and it can hurt us, and we have no idea what to expect.”

Despite being framed by these weighty questions, Fly By Night is unabashedly campy. The show utilizes a recurring motif of singing about sea turtles and revels in moments like rhyming “awful” and “waffle.” But the whimsicality of some parts of the narrative is never over the top.

“It’s a clever show,” Nathanson said. “It’s a little campy, but it’s very sweet, ultimately, and I think that there is more to it than it seems at first glance. … Even though it’s kind of cheesy, I’d say that it’s about finding hope and discovering yourself in a world beset by darkness.”

The music of Fly By Night is a narrative itself. Each character enters with a particular theme, rhythm or refrain that is combined with the show’s other music in fascinating and poignant ways. Mr. McClam is constantly singing La Traviata to remember his wife. Miriam has a song that she sings to remember her father — I Trust Stars. Harold is working on composing a song on his mother’s old guitar. When Harold and Miriam meet and he says that “our songs kind of fit together,” he is talking both about the actual melodies and about what they represent to each character — loss, hope, renewal. The hidden complexities unfold to reveal themselves in scene after scene, and continue to do so long after the curtain has fallen.

“It’s more than meets the eye,” Nathanson said. “It certainly means more to me now than when I first read the script. … But given time, and now that we’ve gotten it on its feet and in costume and with the lights and the pacing and the pit, it’s special.”

The success of the play hinges on the climax of the second act. Were the ending too predictable, the whole thing would be rendered trite. Were it too unexpected, the audience would be left confused. Instead, the resolution is as shocking as it is inevitable. Nobody would guess just how the stars would align to create that moment, but the signs are there all along, the ending foretold from the start.

The fairy tale aspects of the production are reflected in both the serendipity on which the plot depends and in the gorgeous lighting effects, though the play is also profoundly real in other ways.

“I like that the [show] takes place at night,” Lawrence said. “People will come in and they’ll see the show and it’s all about stars, and then they’ll leave, they’ll walk out [under] the night sky and they’ll look up and they’ll think, ‘Wow. I can really see what they’re talking about. I can see the stars and I’m thinking about them now.’”

Fly By Night, now more than ever, manages escapism without being out of touch.

“I think with a lot of things — especially the election — I’ve definitely felt this feeling of futility,” said College junior Alex Jabbour, who plays deli owner Crabble. “Watching this show represents this lightheartedness to life that can be very hard to see especially now. [The show] takes your mind off of it and sort of reminds you that life is more than just politics. It’s also comedy, emotions, drama, laughter and love.”

“I think this is more of a ‘happy fun-times’ show,” Forden said. “It’s not super happy in the end, but it’s got a sort of enlightening, nostalgic energy that I hope people will take away with them.”

When asked about how events in the world might have changed the audience experience of the play since it first premiered, playwright Mitnick had a simple message.

“I think in dark times, it’s not a bad idea to go to the theatre,” he wrote.

One line repeated throughout the play is “Instants, moments, one flickering flame of light.” Fly By Night itself is a delicate balance of humor and hardship, love and loss, ridiculousness and reality, chance and choice. An instant changed or a moment altered and the narrative would fall apart — but OMTA’s production never loses its way.