Students March for a Sanctuary Campus 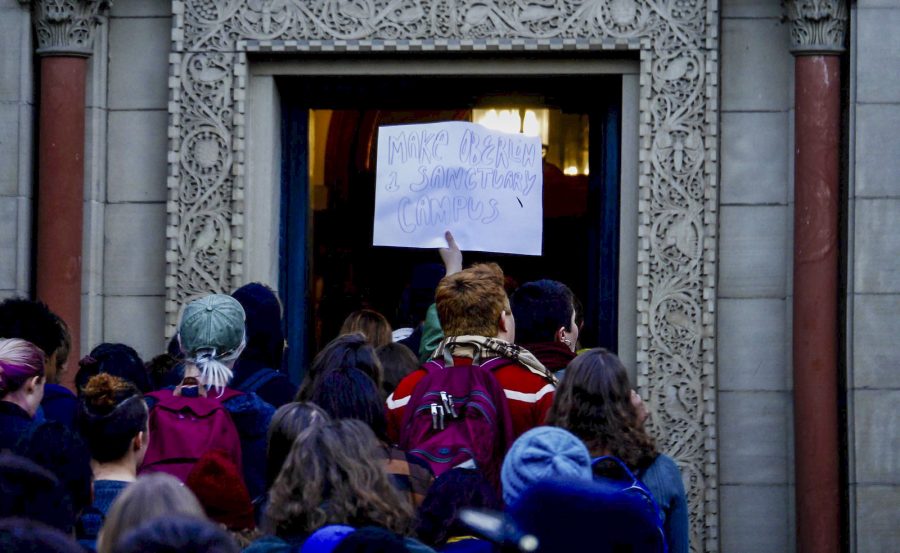 Students filed slowly through the front door of Cox Building and out the back, chanting slogans including "no papers, no fear" and "here to stay."

Hundreds of students and community members made their way through Tappan Square Wednesday, calling on the College to become a sanctuary campus and joining a movement of approximately 100 colleges across the country.

In effect, becoming a sanctuary campus would protect undocumented students from possible deportation, an issue brought to the forefront with the election of Donald Trump.

On Monday, they submitted a letter and petition with the signatures of over 2,400 students, staff, faculty, alumni and family members to President Marvin Krislov and other administrators in support of making Oberlin a sanctuary campus.

The letter called upon the administration to stand with other higher education institutions in the country to have the College “protect our community members from intimidation, unfair investigation, and deportation.”

“[Movimiento Cosecha’s] list of demands is that the College will refuse all voluntary information sharing with [Immigration and Customs Enforcement] … refuse ICE’s physical access to land owned by the College, prohibit campus security from asking students about their immigration status and won’t use e-verify — which checks a student’s immigration status — and it’s also going to prohibit housing discrimination based on immigration status,” Avila explained. “And I think more than that, it’s just taking a stand that the College will do everything they can to protect these individuals within the power that they have.”

Although Oberlin has been a sanctuary city since 2009 through the efforts of recently retired History Professor Steve Volk, the petition highlights how making the College a sanctuary campus would underscore the institution’s commitment in supporting “some of the most vulnerable members in our community.”

Concerns have risen with Trump’s vows to cut federal funding for sanctuary cities. Lee noted that even though the College has supported undocumented students, becoming a sanctuary campus would be another step toward protecting these vulnerable members of the Oberlin community.

“It seemed that while there are good resources as far as funding and mental and moral support go, there seemed to be a lack of legal protection,” Lee said regarding the thought process around the petition.

In response to the rising concern of legal protection, Peck turned to a statement written at Pomona College before the election, showing that the sanctuary campus movement existed before the final election results. She shared it with the other Oberlin petition writers.

“[After] looking at the Pomona letter and doing more research, we realized there had been conversations and moves at different colleges and universities — mainly in California — to make this happen,” Pérez said.

One of the groups leading the movement on campus is Obies for Undocumented Inclusion, a student group founded in 2015 that advocates for the needs of undocumented students and fundraises for the Undocumented Student Scholarship Fund.

Reyes and College students Avila, Eleanor Lindberg and Jesus Martinez published a call to action statement for the College to support undocumented students on Nov. 4. However, with Trump’s election and the faculty and staff’s petition, OUI decided to further amplify the cause by organizing Wednesday’s march in Wilder Bowl.

Beyond the support and action that the students and petition-writing faculty and staff have fostered, there are other students and faculty in support of the sanctuary campus movement.

“I care a lot about immigration,” College sophomore Jack Goldberg said as he prepared to march Wednesday. “I worked really hard for Hillary [Clinton] and I was a campaigner for Hillary, so I’m trying not to give up. And I’m trying to keep the motivation from the campaign going.”

“Community-based acts of defiance will become increasingly important,” Miller wrote in an email to the Review. “Resisting oppression has always involved taking risks. We, as a community, can either choose to be complacent — allowing our immigrant friends, family members, colleagues and community members to face those risks alone — or we can be a community that stands together in active opposition to oppression and resistance in the face of state violence.”

“People have been having this conversation since before I got here, … and we haven’t moved fast enough, and we should’ve been prepared for a Trump presidency,” Reyes said. “I’m hopeful. I’ve been in several meetings. I think there’s momentum. I think there’s been a lot of energy going into strategies, about the resources the College already has, about how we’ve been vocal and about what we can do moving forward.”